Bodil Valero is a member of the Group of the Greens/European Free Alliance of the European Parliament since July 2014 and a member of the Swedish Green Party Miljöpartiet de gröna. She is a member of the Committee on Civil Liberties, Justice and Home Affairs, Committee on Petitions, Subcommittee on Security and Defence, and Delegation to the ACP-EU Joint Parliamentary Assembly at the European Parliament. She is also a substitute member of the Committee on Foreign Affairs, of the Delegation for relations with the countries of Central America, and of the Delegation to the Euro-Latin American Parliamentary Assembly. After spending 12 years in municipal politics, Bodil became a member of the Swedish Parliament in 2006. In the parliament she was the Green Party’s spokesperson for foreign affairs and responsible for migration issues. Her main focus has been on development cooperation, human rights and peace and security. She particularly centres on global justice issues and opportunities for people to move around in the world. Bodil is a lawyer by vocation and has previously worked as a translator, interpreter and assistant to former Green Party MEP Inger Schörling.

The response of the EU to the arrival ‘en masse’ of refugees in need of a safe haven has left much to be desired, and some leaders have used the issue of security threats as an excuse to avoid taking up their responsibilities to provide humanitarian assistance. But until European leaders and citizens join the dots between the complex but interlinked issues of migration and climate change, a secure environment will remain out of reach for all of us. An interview with Bodil Valero, Green MEP for Sweden. 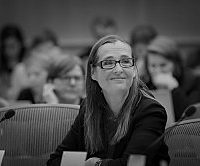