Bronisław Geremek (1932 – 2008) was a Polish historian and politician. He was an outspoken supporter of government reform in the 1980s, a prominent adviser to future President Lech Wałęsa (then leader of the Solidarity movement), and a key negotiator for the free national elections of 1989. Later (1989 – 2001), Geremek served as a representative in Poland’s parliament, as Poland’s foreign minister (1997 – 2000), and as a member of the European Parliament (2004 – 08). He studied at the University of Warsaw and in Paris, where he remained to teach French medieval history at the Sorbonne (1962 – 65) and the College of France (1992 – 93).

Europe: One House for All
By Bronisław Geremek

Professor Bronisław Geremek was a Father Figure to Europe. 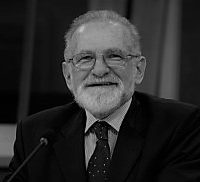