For the past five decades, European politics has been characterised by a simple paradigm: alternating power between two large blocs. Usually, this includes a Christian-democratic centre-right group and a social-democratic centre-left one — with a substantially smaller liberal party often playing kingmaker between the two.

The domination of continental politics by these two political families has been such that, in the mid-2000s, it was very difficult for a party to imagine itself as a party-in-power if it did not belong to — and have the support of — one of the two major European political families.

They were the European People’s Party (christian democrats) and the Party of European Socialists (which, despite the term, has been essentially social-democratic since at least the mid-1980s, with some member parties having already rejected Marxism as early as the 1950s and 1960s).
Conventional wisdom has always assumed that these two major party blocs, which have dominated European politics since the post-World War II period, are too big to fail.

Statistics comparing their performance over time suggests that they are not.

In the 1976 Bundestag elections in the Federal Republic of Germany, the two major parties —the Christian Democratic Union of Germany, CDU, and the Social Democratic Party of Germany, SPD — together took 91% of the vote. By 2013, this total had fallen to 67%.

And even in famously fractious Italy, the 1976 elections gave the (evolutionary, not anti-establishment) Italian Communist Party, the Italian Socialist Party and Christian Democracy over 82% of the vote; today it’s hard even to find these parties on the spectrum, but their successors take only just over 50%.

Clearly these numbers suggest a trend, but what’s really going on here? And what implications can we draw for the future of political party work in Europe?

A challenge to the Washington consensus

Since the beginning of the 2008 economic crisis, voter disaffection and social difficulties across the continent have ushered in an atomisation of political life to the detriment of the classic, umbrella parties of both the centre-right and centre-left.

Spain’s recent election results are a perfect illustration of this trend.

Since the first post-Franco democratic election in 1977, Spain’s political scene had been dominated by a large centre-right and a large centre-left grouping. That all began to fall apart in 2015 with the emergence of two strong new parties on the spectrum: Podemos on the left and Ciudadanos on the centre-right.

Here, as elsewhere, these new players challenge the old paradigm, which even in its most competitive periods was essentially a highly consensual deal between centre-left and centre-right.

As the cultural and economic institutions that provided them with ideological and institutional infrastructure — the church for the centre-right and the trade union movement for the social democrats — decline across Europe, identification on both sides becomes less clear.

It now seems that in the future we will no longer see systems in which two party blocs committed to opposite but equivalent sides of the ‘social market economy’ debate are the major players.

Systems might rather be dominated on one side by a classical-to-social-liberal core and emerging anti-establishment movements that challenge the old order on the other.

The ‘challengers’ are certainly not homogenous in their ideological views, apart from their mutual hatred of the present liberal system.

One could perfectly well argue that very few things link the pro-asylum, pro-regionalist and economically neo-Marxist Podemos in Spain with the largely anti-immigration, anti-Islam and sovereigntist Party for Freedom of Geert Wilders in the Netherlands, or the ever-shape-shifting Alternative für Deutschland in Germany, or the star-quality, omni-issue Five Star Movement in Italy.

But scratching the surface, it is not that difficult to find common ground among such groups: most challenge the Washington consensus of free trade and laissez-faire economics and call for more state intervention, whether direct or indirect, in the economic sphere.

They also tend to portray their objectives as restoring an Eden-like order, usually historically located between the 1960s and the 1980s in Western Europe – more often the 1920s in Central Europe, before the original sin of globalisation supposedly wrecked their hopes for a better future, be that sovereign or a socialist-internationalist one.

Finally, almost all of these parties and groups favour a re-appraisal of foreign policy, usually away from a close-knit alliance with America to a pivot towards the East — whether in a balance of power between Washington and Moscow, or in an outright alliance with “Eastern” powers, which are portrayed as a model for development.

Is the old order too big to fail? Although this latter viewpoint is usually a minor part of the challenging parties’ platforms, and certainly a minor point in their appeal, it is surely one that should raise concerns in US foreign policy circles — although experience with trouble-makers like De Gaulle and Mitterrand in the past have shown that foreign policy is more of a rhetorical tool for challengers to come to power.

Once they take office, a smart foreign policy allows the pivot to be limited, if not disregarded outright. The mention of both De Gaulle and Mitterrand should also reassure the reader: this is not the first time we are seeing the emergence of a family of anti-establishment actors in European politics.

The difference this time is that they are now more integrated with each other and can share best practices to find their way to power.

Many of them, having performed particularly well in elections to the European Parliament, are gathered in the Europe of Freedom and Direct Democracy Group.

The question therefore seems to be whether we are witnessing a fundamental threat to modern, liberal-democratic institutions — which, in some cases is certainly the case — or a not-so-harmful shift in the notions of left and right with a re-politicisation of so-far relatively consensual policy solutions among elites, particularly on issues such as immigration, the European Union or the role of the state in the economy.

In both cases, however, the concepts of left and right as defined by social and Christian democracy are greatly weakened.

In the ‘new’ democracies of Central and Southeastern Europe, democratic political parties had really only begun to find their own footing when the seismic shifts going on elsewhere reached their countries.

The salad days of political party formation in this region in the 1990s and early 2000s seemed to indicate that the two-bloc system would dominate (after a period in which universal anti-communist movements segmented themselves along more traditional right-left lines).

In the Czech Republic, the Civic Democratic Party and the Czech Social Democratic Party were the major players, just as in Hungary Fidesz and the Hungarian Socialist Party almost fully covered the centre-right and centre-left, respectively.

Today a range of non-orthodox, anti-establishment parties have emerged in all the countries of the region, some with very dark, racist and fascist roots.

As examples, it is easy to identify Jobbik in Hungary or the People’s Party/Our Slovakia in the Slovak Republic, where hopes of building a strong, Christian-democratic centre-right have all but collapsed, despite an excellent record of governance in the 2000s.

These parties and others have put significant pressure on the more moderate parties that German, American, British and other democracy-assistance providers sought to help build more-or-less in their own image.

They have also, in some cases, pulled the more centrist parties toward one pole or another, as in Hungary, where Fidesz must constantly calibrate policy to the right in order to preclude greater leakage to Jobbik, which is now the country’s main opposition party.

Much of the future evolution across the continent will depend on the capacity of European systems to answer the challenges posed the ‘populists’, or in some cases to co-opt the less extremist elements of the challengers’ appeal to reinforce the system.

When it comes to answering the challenge, established parties are now faced with the need to fundamentally transform themselves in order to survive, both ideologically by redefining and re-politicising what had so far been technical issues, and institutionally by lightening their operations and making their structures more manoeuvrable.

In some other cases, survival will also depend on the capacity of the existing structures to absorb the challengers by giving them a stake in the system.

This tactic of co-opting the more radical elements is nothing new — in the late 1990s, then centre-right ÖVP leader Wolfgang Schüssel in Austria refused a grand coalition with the Social Democrats to rule in partnership with Jörg Haider’s Freedom Party of Austria (FPÖ), thereby making the challengers face their responsibility (which they were ultimately unable to do).

In the early 1980s, Francois Mitterrand invited unreformed communists to hold ministerial powers in his new Socialist government – a move which in the middle of the Cold War certainly raised a few eyebrows in Bonn and Washington, but in the end managed to tame the French Communist Party and started the assimilation of its Eurocommunist elements into the mainstream while isolating the real anti-establishment individuals from the majority.

Other examples abound, from Christian Democracy’s deal of power-sharing with the communists in Italy in the post-war period and ill-fated rapprochement in the 1970s, to the story of the French Third Republic, still the longest serving regime in France in the last 200 years, which rested on the assimilation of radical elements to its core – to such an extent that the original Radical Party of the 1870s was the most conservative centrist party of the late Republic.

This strategy is not without its own challenges and requires particularly leadership skills, as there is an inherent risk that once associated to power, the ‘populists’ might use it to overtake their liberal rival in order to kill the established order.

But it is also one that confirms the idea that historical parties now need to think outside of the box if they are to survive — for the old conundrum of social versus Christian Democracy is no longer relevant to today’s Europe. Recognising this shift and adapting to the new realities (with or without rebranding) will be the only way in which Europe’s institutional parties can survive the current wave of populism that threatens to flood them.

This article was originally published on OpenDemocracy.

Reflections from a landmark conference at Lund University which examined the political ecology of the far right, and why progressives must be awake to this.

Rally Around the Flag? The Far-Right Response to Covid-19 Politics
By Alexander Ruser, Amanda Machin

AfD, the Lega and the Swedish Democrats have all struggled to find a message amid the pandemic. However, things might be changing. 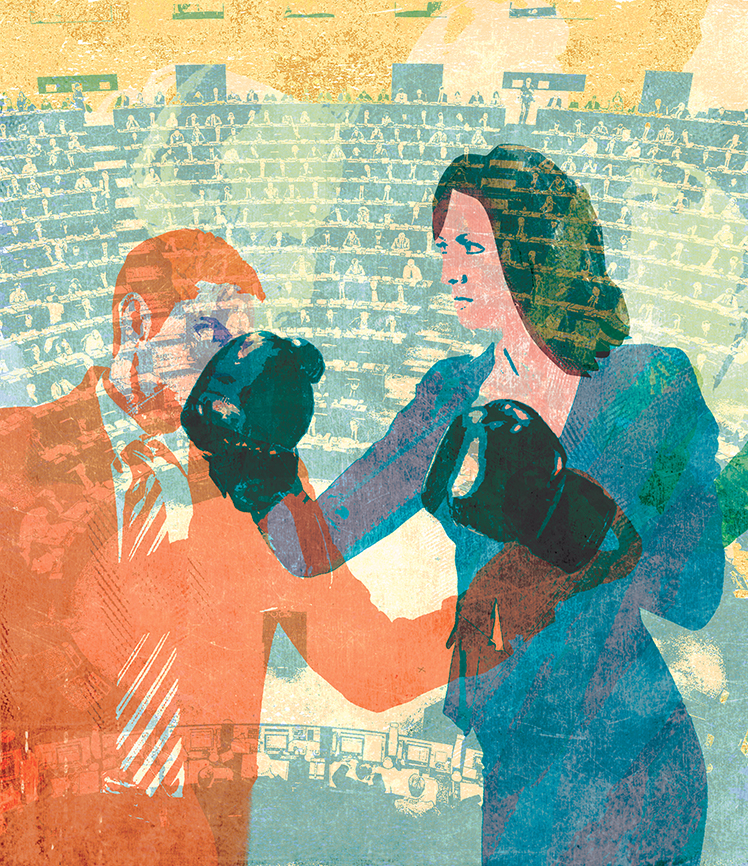