Early political warnings suggest that the EU might reopen established rules on genetically modified food, which would put new techniques at risk of being deregulated. EU food policy experts Juliette Leroux and Francesco Ajena unpick how the agrifood industry is moving to rewrite the rules with serious implications for small farmers, consumers, and the climate.

Since 1990, when the first transgenic crops were developed worldwide, the European Union has put in place a regulatory framework for genetically modified organisms (GMOs). The aim of the GMO legislation is to make the creation of a single biotechnology market compatible with the protection of public health and respect for the environment.

Transgenic plants are plants into which one or more genes from another species have been introduced into the genome using genetic engineering processes. This is a well-known concept among the public, but that does not mean that transgenic plants are the only types of GMOs, nor that they are the only ones covered by the GMO legislation. Other gene editing techniques are constantly emerging, fuelled by large research programmes. For the last 30 years, new techniques of genetic engineering have been researched and developed.

This has generated a question of legal interpretation. Are all these techniques in fact producing GMOs?

On the July 25 2018, after almost 10 years of uncertainty, the European Court of Justice (ECJ) – the highest court of the European Union – delivered a ruling clarifying that organisms obtained by the new techniques of directed mutagenesis are considered genetically modified organisms under the EU GMO Directive and are subject to its obligations.

The ruling was decried by the agrifood industry, which accused the Court of hampering innovation. Some scientists and some senior EU officials (among others, the European Commissioner for Health and Food Safety, Vytenis Andriukaitis) have also positioned themselves against it. On the other hand, farmers, consumers, scientists, and environmental groups support the Court’s conclusion that new GMOs should be regulated.

Since the global genetically modified seeds market size was valued at 20.07 billion US dollars in 2018, and it is still expected to grow, it is undeniable that economic stakes are high. In the face of EU consumers’ widespread opposition towards GMO crops, ‘new’ GMOs represent a huge opportunity to overcome public reticence and unlock large profits.

Early political warnings suggest that the EU is heading for a reopening of the GMO Directive, which would put new techniques at risk of being deregulated. On the verge of this hypothesis, some clarifications and systemic considerations are needed to refocus the debate on the real issues.

GMOs are allowed in the European Union

First of all, contrary to some claims, this ruling was never a ban on gene editing techniques, but simply a statement that these techniques should be covered by the obligations of the current GMO legislation, which also covers older techniques such as transgenesis. GMOs are allowed in the EU. Around 70 of them are currently authorised for use in food and feed. Thousands of tons of imported GM crops (mostly soybeans, rape seeds, and maize) are mainly used in animal feed in the EU. They were allowed after going through a safety assessment, which, although needs to be updated to address the latest technological developments (for example for stacked events genetically modified organisms), is absolutely necessary.

GMOs are allowed in the EU. Around 70 of them are currently authorised for use in food and feed.

Arguably, there is only one GM plant (a maize) authorised in the EU for cultivation, and GM ingredients are very seldom used in human food. The reason for this, however, is not a ban at the EU level but rather the strong reluctance of people to eat them. The mandatory traceability and labelling of GM crops and ingredients allow consumers to make this choice. Nineteen member states have used their right to ban cultivation of this maize on their territory.

As for research on genetic engineering, it was always and still is allowed, provided that contamination is avoided.

The role of the ECJ – to clarify legalisation – is in line with the principle of separation of powers. The role of the European Court of Justice is to read the EU law and clarify its implementation, taking into account the original intent of the legislators. They do not take part in the debates on the intrinsic value of the law. Elected official should be careful not to undermine the separation of powers.

Attacking the Court because it reads the law in a way that might compromise private interests is highly problematic : it politicises a function that should not be political.

Attacking the Court because it reads the law in a way that might compromise private interests is highly problematic. Such a debate politicises a function that should not be political.

The different aspects of the debate around new and old techniques of genetic engineering and their place in our societies – scientific, economic, and societal – are not the domain of the Court.

Research on new techniques of genetic engineering is constantly evolving. New information is discovered constantly, including new off-target effects and other unintended effects. Although science is evolving fast, a thorough and appropriate safety assessment is all the more important before any product of these techniques is released in the environment (in vivo). Likewise, traceability is necessary because it is the only measure that allows the spreading of a GM plant to be stopped when a problem is discovered.

At the same time, labelling on food and feed is necessary to ensure the freedom of choice for consumers.

At the same time, labelling on food and feed is necessary to ensure the freedom of choice for consumers. Labelling is also crucial for organic farmers and breeders around the world: if they do not know where the GM plants are, they cannot avoid them.

The precaution principle is under attack, not science

The effects of these attempts to put the GMO discussion on the table again can be perceived at the political level.

A quick evolution of views within the agriculture committee of the European Parliament has been noted. In a hearing held on the issue in December 2015, all the members who took the floor were against the idea of reopening the GMO legislation, while a hearing on the same issue held at the beginning of 2019 saw half of the speaking MEPs calling for this reopening.

More recently, a few weeks ago the Finish Presidency produced a draft Council “requesting the Commission to submit a study on the Union’s options for addressing the legal situation of new plant breeding techniques” and “to submit a proposal, if appropriate in view of the outcomes of the study”, a very transparent call for reopening the GMO regulation. The issue is even mentioned in the leaked first draft of the “Farm to Fork” strategy, and insiders have been talking about a legislative proposal in 2022.

Basic precaution measures like safety checks, traceability, and labelling are accused as being an attack on science and stifling research.

The way the debate has been framed by the agroindustry is mainly to blame here: basic precaution measures like safety checks, traceability, and labelling are accused as being an attack on science and stifling research. Citizens’ opinions, Court rulings, and even scientific studies are all labelled as being part of this anti-science conspiracy. The term “new breeding techniques” used by their proponents is in itself a communication tool: avoiding any references to older genetic engineering techniques, and making a direct link with conventional breeding methods.

This strategy is not limited to genetic engineering, however; the precautionary principle has been under constant threat of erosion over the past five years, and the introduction of the industry-coined “Innovation principle” in the new Horizon framework is only the latest episode of this battle.

We should recall why the precautionary principle was put into place: because serious, deadly crises kept happening when access to the market for technologies was led by industry, and because sometimes an improbable risk must lead to strong precautions if the consequences of said risk are irremediable.

But the wider problem is that the return of this debate will impede progress towards a sustainable food system.

As climate and ecosystem breakdown are already happening – atomising our ability to produce food –  we need to use all our resources and time to focus on real solutions to these pressing problems. Agroecology has the potential to transform agriculture from a significant problem into a significant solution (see also).

New genetic engineering techniques will not solve hunger, neither the environment, or small farmers. A widespread adoption of agroecology will.

The money spent on research new genetic engineering techniques could be used to research robust, resilient low-input conventional breeds. The considerable amount of time and public funds which might be used by the European Parliament to review the GMO regulation – which is still very much fit for purpose and in line with international treaties – could be used to review legislations which urgently need to be adapted to current global challenges (pesticides regulations, Common Agricultural Policy, among others). The time spent by Commission officials on a revision of the GMO regulation would be better spent checking the proper implementation of the existing regulations in member states or making the current risk assessment more up to date.

GM solutions fail to achieve what they were supposed to achieve. An astonishing amount of money is used to fuel this failure.

Time and time again, GM solutions fail to achieve what they were supposed to achieve (decreasing pesticide use, producing more food, or solving malnutrition). An astonishing amount of money, both public and private, is used to fuel this failure. This means the real solutions, the ones which will empower farmers and local populations and take local conditions into account, are underfunded. This is a luxury we can no longer afford.

Are the giants of the agro-industry who claim they are determined to "Feed the world" in fact fostering food insecurity through exploitation and environmental degradation?

The IPES-Food co-chair discusses CAP reform, agroecology, and how only an overhaul of the food system will make it sustainable.

Many EU policy-makers see precision agriculture as the answer to the question of food sustainability, but agroecology offers a genuinely sustainable solution already at hand. 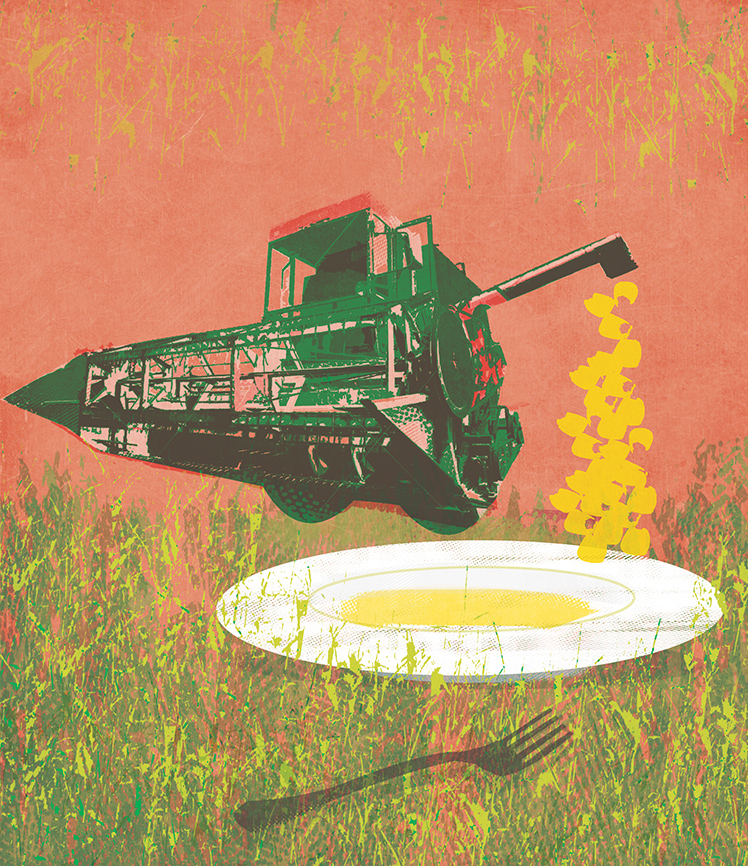