Rewilding is currently one of the hottest topics in nature conservation. But is it the way forward or a dangerous waste of time and money? Rewilding means different things to different people. In the age of extinction, defining what it is and explaining its strengths and limits can help shape the future of wildlife conservation for the decades to come.

Little of the modern world is wild and even less of it is truly natural if we take that phrase to mean more or less unaffected by human activity. In Europe you will struggle to find a landscape which is not dominated by farming, commercial forestry, urban areas, canalised waterways or concrete-coated coastlines. To find wild, natural habitats in Europe one has to seek them out with some determination. One of the best examples is the 3000-square-kilometres Białowieża Forest straddling the Poland/Belarus border, home to 2000-year old oak trees, Europe’s largest herd of bison, and wolves.

But even Białowieża is semi-natural. The bison were reintroduced, the wolves were absent for many years but have recolonised, and the oak trees are the survivors of past logging. But a place like this is very different from other European forests: the forest has an air of majesty and feels ancient. It is full of wildlife if you know how to look and is spectacularly rich in insects and fungi as well as the bisons, wolves, and lynxes that pull in the ecotourists. Much of northeast Europe would once have been covered in similar forests.

One Białowieża is not enough. More of this type of forest should be restored, along with natural wetlands, grasslands, and coasts. Such areas would not only be habitats for wildlife, and great places for people to enjoy seeing that wildlife, but would also recreate natural ecological processes delivering carbon storage, unpolluted water, and flood protection. Rewilding is poised to be an exciting part of our future provided the opportunities are grasped now.

The dilemmas of the semi-wild

Oostvaardersplassen, in the Netherlands, illustrates the potential of rewilding of wetland sites but also many of the issues that surround such projects. Oostvaardersplassen is a large (22 square kilometres) polder reclaimed from the sea in 1968. It contains a mixture of wetland and drier areas and has been stocked with red deer, Konik ponies (a small horse of Polish origin), and Heck cattle (a domestic breed with many characteristics of Europe’s extinct cattle species, the aurochs).

The Dutch rewilding site demonstrates how quickly a wildlife-rich wetland can be created from scratch. It was rapidly colonised by white-tailed eagles spreading from eastern Europe and great egrets spreading from southern Europe. Standing on the edge of the site it is possible to imagine that it is an ancient wetland that has been protected from loss rather than created just over 50 years ago. It is almost a case of “Just add water and stand back and wait for the wildlife” but the story is not quite as simple or uncontroversial as that.

in the absence of natural predators what are the responsibilities of the rewilders for the welfare of the animals they have reintroduced?

The introduction of deer, ponies, and cattle was a deliberate attempt to recreate some of the features of past European grazing regimes but several native species of grazing animal are not present such as elk, wild boar, and bison. Thus debate continues amongst nature conservationists about how well Oostvaardersplassen really mimics a natural ecology. But the larger controversy around the site is linked to its small size and the absence of large predators such as lynx and wolf. The grazing animals are essentially fenced in and free from predation and so their numbers have expanded greatly and in some years there are large die-offs. Many argue that allowing many animals, that were introduced into this enclosed area in the first place, to die from cold and starvation is cruel and that would not be acceptable under farming conditions so why should it be tolerated from nature conservationists who claim to care for animals? There is a conundrum for the proponents of rewilding – in the absence of natural predators what are the responsibilities of the rewilders for the welfare of the animals they have reintroduced? The solution that has been reached, after much heated debate, involves some winter feeding of the grazing animals and periodic culling of the herds. Similar issues are likely to arise in other projects which are small scale but will disappear on larger sites, particularly if large carnivores can recolonise them naturally.

Oostvaardersplassen is large but not large enough to allow migration of grazing animals, its water levels are controlled to some extent, its fish populations are not fully natural, and it lacks the large carnivores that would normally despatch the old and sick herbivores. Is this a success or a failure? Your response may depend on whether you compare the site with the Dutch farmland which surrounds it or with Europe’s natural wetlands of thousands of years in the past.

In the United Kingdom many projects have sought to recreate habitats but all are on a relatively small scale. In the Fens of East Anglia there are several wetland recreation projects managed by conservation charities such as Lakenheath Fen (3 square kilometres, Royal Society of the Protection of Birds), the Great Fen (a 50-year vision to create 37 square kilometres, Bedfordshire, Cambridgeshire and Northamptonshire Wildlife Trust) and Wicken Fen (5 square kilometres at present but with a 100-year vision for 55 square kilometres, National Trust). All are wildlife success stories but none aims to restore all the natural processes and the full range of missing species. We can regard these projects as ‘rewilding-lite’ but even so each has met a mixture of enthusiasm and opposition from local people and interest groups.

But perhaps the most high-profile of UK rewilding projects, which would certainly use that phrase, is the project at Knepp in Sussex where a 15-square-kilometre failing agricultural enterprise has been transformed into a thriving rewilding site with impressive wildlife and a dramatic change in habitat. A range of domestic grazing animals (cattle, ponies, and pigs) alongside wild deer take care of a large part of the habitat management work. Knepp now generates income through marketing itself as a destination for camping, glamping and weddings, and selling its extensively produced meat. The site managers take the place of the natural predators and the meat produced feeds the bank balance of the project rather than wolves or lynx.

Knepp has, in little more than a decade, become one of the most important sites in the UK for a range of otherwise declining species such as nightingale and turtle dove, and is now probably the premier site for the rare purple emperor butterfly.

A vision of restoring natural processes rather than aiming to benefit particular species has driven the project’s achievements. The owners of Knepp, the Burrell family, argue that that vision is what singles out their success from that of conventional nature conservation organisations. But they would also admit that they have made full use of grants available through government funding that have enabled them to make this shift and that the profitability of Knepp depends, at least in the medium term, on the continuation of that taxpayer support.

What are the main barriers to rewilding? The first is that rewilding is about radical change and is therefore more threatening than good old familiar nature conservation. There is a consensus that places like Białowieża should be protected because of their unique value but anyone wanting to recreate a similar forest from scratch in western Europe would face concerted opposition. And second, rewilding is expensive. Where will the money come from and will governments play a bigger role funding the best projects?

Whether or not rewilding is the definitive way forward, it seems obvious that it is a way forward. Every urban park could have more uncut and unkempt grassland, and every nature reserve could move towards a greater adoption of unmanaged areas. Thinking on a grander scale, national parks are ideal places to allow natural processes to flourish. They should move from being protected areas to rewilding areas. UK National Parks such as the Peak District and the Yorkshire Dales could become major centres of rewilding with natural treelines, restored blanket bogs, and a much greater range of native species (starting with red squirrel, pine marten, and beaver). And what great assets they would be to their local economies with ecotourism playing a major part and reduced costs of water treatment for utility companies. National parks are obvious testing grounds for the benefits of rewilding – and luckily their future role in England is being reviewed at this very moment. Let’s hope for some radical rewilding proposals that benefit wildlife and people.

Under the Paving Stones, a Vegetable Garden Society, Media and Culture
By Joëlle Zask

Greening citizenship - through gardening practices - offers an opportunity for self-government with radical potential to re-balance the relationship between people and the natural world.

Planting the Seeds of Tomorrow’s Agriculture Agriculture
By Frédérique Hupin

An agricultural specialist reports on the ground with the Belgian farmers adopting agroecology, the sustainable techniques that let nature do the work.

A look at the past, present and future of rewilding that makes the case for restoring natural wonder to both country and city. 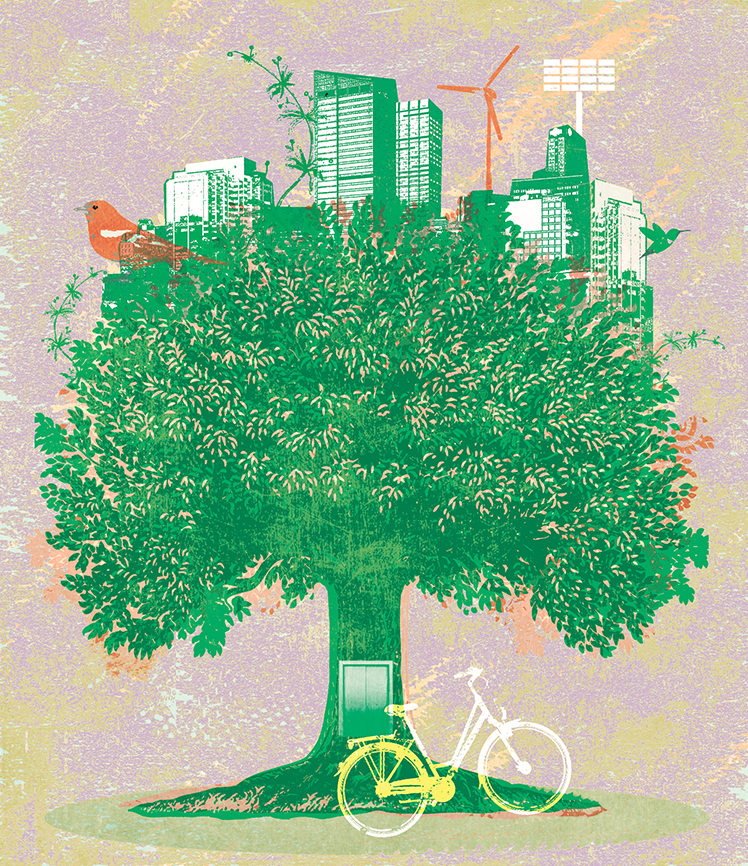