International trade is seen as underpinning economic growth and prosperity. The way it currently functions favours corporations over smaller firms and is also a huge driver of climate change. It also creates huge ‘ecological debt’ to countries where raw materials are sourced from, some of which are necessary for the development of green technology. Some simple measures can ensure that international trade is less harmful to the environment.

International trade, driver of growth, and … of greenhouse gas emissions.

Over the next decades, international trade should be the most important driver of economic growth, which remains the be-all and end-all of dominant political systems, despite the regularity with which the collateral damage is highlighted. According to the OECD, “Global growth will stall, going from 3.6 per cent between 2010 and 2020 to 2.4 per cent between 2050 and 2060, as a consequence of ageing populations and economic slow-downs in emerging economies … [growth in rich countries will plummet to 0.5 per cent per annum between now and the end of this period]. By 2060, global trade agreements will generate the largest increases in global GDP and wellbeing”.

This shows how much is expected from the concluding of trade deals. One of the downsides of this is the fact that the expected profusion of these kinds of deals would lead to a rise of 290 per cent in greenhouse gas emissions from international freight, resulting from a projected quadrupling of trade in goods.

Of course CO2 emissions will not be the only environmental damage. A macro-econometric study of 187 countries, and a total of almost 16,000 industries (!) found that, between 1990 and 2011, the CO2 emissions of world exports rose by 10.5 per cent, its CH4 (methane) emissions rose by 14.7 per cent and its N20 (nitrous oxide) emissions by 23.6 per cent. Similar figures were identified for air pollutants (for example, +17.8 per cent for CO, +16.5 per cent for non-methane volatile organic compounds (NMVOC)). The authors even evaluated the impact of large sectors of the economy on greenhouse gases and air pollutants. 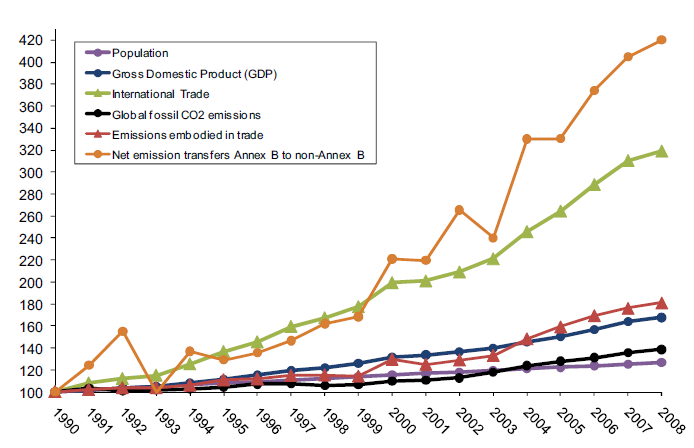 With the implementation of a just and ecological transformation of the economy, the Greens want to foster certain industries, such as clean renewable energy and the social economy, but also certain kinds of stakeholders, such as co-operatives and small and medium-sized enterprises (SMEs). This positive discrimination towards SMEs, rather than big business, is because they are more resilient, more innovative, and more rooted in their local area than big business. The latter introduced competition between workers (in particular between their own production plants, such as ArcelorMittal, which didn’t hesitate to play Liège in Belgium and Florange in France against Ghent in Belgium and Bremen in Germany, or Caterpillar, which is disposing of the Gosselies plant in Belgium, despite its being profitable), and putting the same areas in competition with each other, forcing them to compete over special offers to attract investment. Elsewhere, large corporations contribute to the disconnection between the real economy and the financial world, in that a growing proportion of their profits are linked to financial operations (equities, etc.) rather than commercial activity.

In questions of international trade, these two categories of business do not compete on a level playing field. SMEs (less than 250 workers), which make up 99.8 per cent of EU businesses, normally operate at national, or European level, and little beyond EU borders.  According to the BNB (National Bank of Belgium), 1 per cent of Belgian exporters – which are large businesses – make up more than half of the country’s exports. 1 per cent represents less than a hundred businesses.  In France, 1 per cent of businesses take the lion’s share of 70 per cent of exports! This proportion also hovers around these figures in other countries.

The sectors benefiting the most from trade agreements are clearly those containing a significant proportion of large corporations. The chemical industry, transportation equipment, electrical and optical equipment, and machinery and equipment connected with the food and drink industry are the principle exporters. Apart from the latter, they are all dominated by large corporations.

Trade agreements, such as TTIP and CETA, the best known, thus tend to benefit the largest businesses. But, in the attempt to promote transatlantic trade, a collateral effect is created which reduces commercial interaction between European partners. Thus, rather than having machines delivered by a German company, a Belgian company could find a North-American supplier more attractive, losing the German business a customer. This could be a SME, or a large business with a network of sub-contractors, most of them small businesses. Thus, international trade leads both to ‘trade creation’, but also ‘trade diversion’. But, as we have seen, ‘trade creation’ tends to benefit large global corporations, and ‘trade diversion’, operating as it does at an intra-European level, hinders the development of SMEs.

Even if 600,000 SMEs export beyond the European market, that is only 3 per cent of the total number of businesses. This low percentage is due to issues around finding new customers on foreign markets, having personnel with the necessary skills to successfully internationalise the business, and possessing expertise in domestic regulation and international competition. 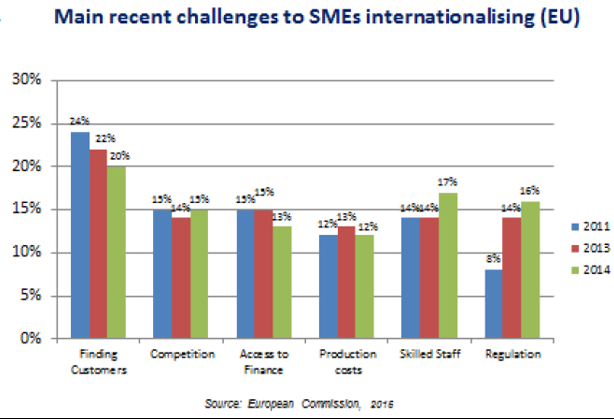 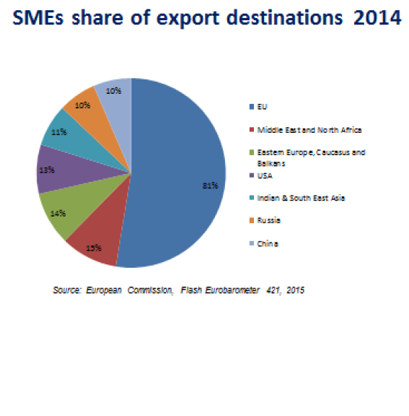 Does this mean, then, that we should turn our back on international trade, and openly oppose it? Such an attitude is neither realistic nor desirable; in fact, it would suggest that the EU could confine itself to an autarchic model. In any case, this would be practically impossible, because the European territory contains too few of the raw materials necessary for manufacturing processes. And it is not just a question of energy resources, such as oil or gas, for which we know the EU depends on Russia, Saudi Arabia, Algeria, Qatar and Norway : a study has shown that 30 million jobs depend directly on access to raw materials. A list of 54 raw materials deemed ‘critical’ (due to the risks associated with their supply, and their importance for the economy) was commissioned from a group of experts by the European Commission. Their research concluded that not a single Member State features amongst the top 10 producers of any of them. The EU is more than 90 per cent reliant on the rest of the world!

It is all the more problematic that adequate, reasonably priced access to a certain number of raw materials is essential to ecological transition: for example, rare earths used in wind turbines, lithium for electric vehicle batteries, beryllium for electronic and IT technology, borate for insulation (glass), cobalt for batteries and catalysers, gallium for solar energy (with Indium), and the manufacture of batteries and magnets.

In 2011, the United Nations Environment Programme established that global resource extraction rose from 7 billion metric tonnes in 1900 to 55 billion in 2000. In the space of 35 years, the trade in raw materials has multiplied by 3.5, two thirds of them being imported by industrialised countries. A recent study updated the calculation of ecological debt caused by the trade in non-renewable resources and the resulting environmental damage in producer countries. Ecological debt covers two aspects: first, exports from poor countries and regions at prices which do not reflect the local damage caused by the exports, or the depletion of natural resources, in exchange for goods and services from rich regions and countries ; second, the tendency of rich countries to use environmental space (the ecological footprint) without paying the full price i.e. without accounting for negative externalities. In this way, the rich avoid responsibility for the damage inherent in their economic development; most of the damage occurs in the exporting countries where environmental policies and budgets are virtually non-existent, and where social movements around these issues – where they exist – are ignored.

In addition to the depletion of non-renewable resources, it is important to emphasise the intergenerational inequality brought about by the degradation of soil used for biomass production, in that it could prevent future generations from enjoying these resources, in particular for food production.

In the discussion around ecological debt, the authors are deliberately not addressing the issue of giving the debt a monetary value, as this would lead to putting a price on resources, and consequent recourse to controversial valuation methods. They are thus limiting themselves to evaluating the flow of materials (biophysical flows), which are objectively measurable.

The first map shows the historical levels of domestic resource-extraction per hectare. In other words, it answers the question: to what extent had the 150 countries we have data on exploited the resources available on their own land ? Oil producers Kuwait, Iraq and Qatar come out on top, with Europe and Japan not far behind. 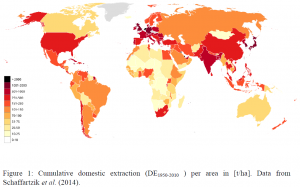 The next map tells us which resources extracted from each country are destined for export. The map thus shows the trade balance of the 150 countries, that is the total imports of resources, minus the exports. The higher the indicator, the more the country is reliant on the rest of the world to supply the resources it needs and keep the economic machine going. Europe, the USA, South Korea, and Japan, which, as we see above, are amongst the countries which have exploited their land the most, are also those which depend the most on the rest of the world for resources: they have created an ecological debt to their future generations, but also to their supplier countries. 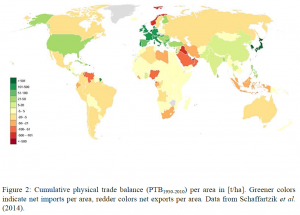 Putting international benchmarks to the test

At least two substantial international frameworks exist to mitigate the environmental damage. One is the Paris COP21 Climate Agreement, though its exact procedures still need clarification, and the other is the 17 Sustainable Development Goals, which were adopted by the international community a few weeks before, in September 2015, and which fall under a light touch governance, in that countries make no concrete commitments, either for mandatory supervision arrangements or for sanctions.

With hindsight, the outcome of the Kyoto Protocol is mixed, because although it led to a raising of awareness, and initiatives such as the European Union Emissions Trading Scheme, it also encouraged businesses to relocate their most polluting activities to less strictly regulated countries.

Faced with the magnitude of the task of bringing international trade into line with the biophysical limits of the planet, new mechanisms will have to be created.

What can be done ?

The EU must establish transparency, and the publication of documents exchanged by the parties involved in trade deals, as a precondition of starting negotiations (already common practice in the multilateral dealings of the World Trade Organisation).

Then, the EU must ensure that the trade and investment agreement contains provisions for:

a) be symmetrical, in the sense that the MIC will aim to protect not only the interests of investors (rights), but also to ensure that they behave in a reasonable manner (obligations), notably in relation to the principles defined by the UN or the OECD.

c) sign up to article 31.3.c of the Vienna Convention on the Law of Treaties, which specifies that, in the event of litigation, the interpretation of a treaty should take into account ‘not only the context, but any relevant rules of international law applicable in the relations between the parties.’

d) recognise the ‘Clean Hands Doctrine’, or similar principles, as a condition for the admission of grievances

e) if necessary, be complemented with an independent investigatory body charged with making enquiries into the background, and possible damages, for both parties in a dispute, whether incriminating or exonerating.

The (Sustainable) Energy of Despair: A Review of Guillaume Pitron’s Book

The war in Ukraine will continue to cast its shadow over the country’s natural ecosystems for decades to come.

The case of a small town in Lithuania shows how funding earmarked for the protection of biodiversity is being used in ways that undermine this goal.