While putting the finishing touches to this edition of the Green European Journal, news reaches us that a majority of voters in the UK have opted for their country to leave the European Union. If there was already a sense that the European project is in danger of stalling or even unravelling, this latest development only compounds those fears. We certainly need a profound reflection on this seismic outcome. But what underlies the apparent malaise the EU is experiencing?

This edition of the Green European Journal sets out to identify and apprehend some of the forces of integration and disintegration at work in Europe today. It  rises from the need – above and beyond immediate political priorities and imperatives – for the Greens to urgently analyse Europe as it exists, real Europe. In a bid to avoid the trap of merely putting forth a vapid pro-European rallying call, the Journal offers analyses, opinion pieces and interviews to shed light on the tectonic shifts that give rise to the tangible transformations taking place in European societies. Far from an essay on the European institutions and treaties, this edition is essentially an attempt to explore what lies beneath the surface of daily politics, and the attitudes of citizens towards the EU. If, as Bernanos said, the  highest form of hope is to overcome despair, the contemporary historical watershed compels us to embark “in search of the lost Europe” and envisage its future.

From the analyses of Reinhard Bütikofer and Yanis Varoufakis on the state of the Union to the contemplation of the division between centre and periphery; from the abandonment of European youth to the ambiguous struggle against TTIP; from the information war between Russia and the EU to the question of sovereignty; from European security to the Eurozone; from the significance of religion to the rise of regionalism and independence movements; from the democracy conundrum to the rise of populism; and through prejudice and the fraught marriage of France and Germany, the Journal’s contributions bring to the fore a dialectic and its confusing and often seemingly contradictory forces which could potentially be fatal to the European project. The European idea has been racked by endogenous and exogenous challenges and finds itself in a maelstrom between currents that would beat it back into a retreat, and those that spur it on  to pursue its course of integration. The Brexit referendum and its expected consequences are a textbook case in this regard.

Analysis of the dynamics of integration and disintegration clearly highlights the emergence of a new political landscape. The traditional left-right division retains a certain heuristic importance, of course. And yes, a Europe of elites completely out of sync with the interdependent nature of our economies and our ecosystems locked into the trappings of the nation state, a Europe of democratic and institutional practices that date from another time, far removed from citizens. But, in the early phase of the 21st century, it appears that Europe is more crucially divided between retreat and openness. Retreating back to the confines of a nation, a generation, a culture, an institution, security, underscores the fear of a threatening environment, the current paralysis, and a general loss of bearings.

The exposed disappointment with the neo-liberal compromise leads to a rise in populism, authoritarianism, and political forces that offer no vision beyond reviving time-worn nationalist tropes. To put it simply, the Greens have chosen openness. Nonetheless, in order to prevail in the battle for Europe, they must analyse the compulsion to retreat, and understand the fear and psychosocial insecurity, while defending their choice. The time has come for the Greens to stand up for their discourse of openness and hope, and to bear the standard of the European dream confidently. Failing to do so will mean failing to reclaim their political ideals of freedom, democracy and an alternative model from the grips of populists and the extreme-right. The idea of Europe must be overhauled if it is to survive.

Today, Europe is barren and has been stripped of what little emotional content was left by the unrelenting defenders of a mythical past of nations and their fictional soul. The Greens must also tap into those emotions while promoting pluralism and tolerance. The European Greens have everything it takes to face the challenges of the 21st century, yet, they find themselves at a historical juncture and all too frequently associated with mainstream and centrist parties whose political base seems increasingly challenged.

Before building the policies and beating the drum on the political campaign trail, and because the very idea of Europe is under attack from all sides, the Greens must set out visions, narratives and strategies – political and meta-political – on the purpose and course of European integration. Failing to do so would be tantamount to missing their political destiny. 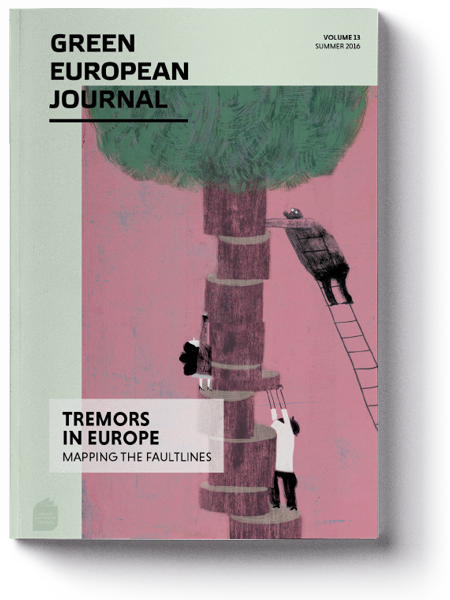 A Letter to Those Who Must Soon Give Way to the Next Generation
Guillermo Rodríguez Robles
Boats Against the Current: Europe in Unchartered Waters
Laurent Standaert
The Anxieties That (Dis)Unite: Terrorism and the Forces of Integration
Judith Sargentini, Michal Berg

The Fight Against TTIP: A Green Pyrrhic Victory? Finance and Economy
By Georg Maisser

Victory seems to be in sight for the movement against the Transatlantic Trade and Investment Partnership (TTIP).

ENPL
ENPL
Europeanisation from Below: Democracy as a Driver of Integration Democracy
By Donatella della Porta

Can democracy be the project that leads to further European integration?

ELENFR
ELENFR
Looking Back and West: Lessons for Europe’s Future Future of EU
By Barry Eichengreen

Object of Political Desire I: My Hypocrite Reader
Rui Tavares
“We shouldn’t be afraid of involving businesses”: Doughnut Economics in Brussels
Barbara Trachte, Benjamin Joyeux
On the Edge of the Sixth Mass Extinction: How Can We Prevent It?
Martin Vrba
Taking Energy Systems From Profit-Making to Ensuring Wellbeing
Chris Vrettos