It’s difficult to point to a time in recent years when European integration was not under pressure. Yet presently, the problem-solving capacity of the European Union definitely seems to be exhausted, for two crises simultaneously challenge it: the Euro crisis and the Schengen crisis. But the calculation that two crises cause double trouble might be too simple if these two overlapping crises neutralise each other.

Where will the Euro crisis and the Schengen crisis lead European integration? In order to yield a plausible answer, one needs to understand the relationship between the centre and the periphery of the European Union as shaped by political exchanges. The periphery commits itself to economic and political modernisation and it promises to work as a stabilising factor in its region. This commitment always implied serving the centre’s control interests: tackling cross-border crime; controlling migration; preventing cross-border environmental pollution. In return, the centre offers financial and administrative support for economic and political modernisation, a step-by-step increase in freedom of personal mobility, and the promise of attaining the living standards of those at the centre.

The global financial crisis caused a skyrocketing increase of risk consciousness of creditors worldwide, and hence applied pressure on the common European currency. Members of the Eurozone in the periphery were cut off from international financial markets, which meant that refinancing of public and private debts became impossible. Bouncing real estate credits, mainly in the US, and bond market losses triggered chain reactions which affected European banks. This in turn forced politicians to rescue “their” banks, as they were seen as systemically relevant, thus causing vicious circles fuelled by illiquidity of commercial banks, a drying-out of the interbank market, and mounting public debts.

The Schengen area was shattered by the aftermath of the Arab spring, while the EU lost the old authoritarian regimes as collaborators in limiting migration. Most significantly, conflicts in the wake of the Arab spring caused a tsunami  of flight and migration into mainland Europe, one that had been inconceivable to Europeans so far. The effects were immediate, and the trigger of the Schengen crisis was threefold: it stemmed from the escalation of the war in Syria; to overcrowded refugee camps in Lebanon and Jordan; and Turkey facing decreasing international financial support for food, alongside a dramatic shift in  its refugee policy.

As an immediate result of both crises, the political exchange of relationships collapsed under the dual stress between the centre of the EU and the southern Member States, as well as Turkey and the North-African neighbour countries, respectively.

In order to learn something about the chances to create new – and preferably, morally acceptable – political exchanges between centre and periphery, the interdependent nature of both must be examined closer. In this respect, the management of the Euro crisis and the Schengen crisis demonstrate remarkable differences.

The management of the Euro crisis aims to rebuild creditors’ trust as a precondition for the well-functioning of the common currency, which requires serving creditors’ interests at the best possible rate. It is obvious that such biased politics is likely to cause a problem of legitimacy, but the official political interpretation at least partially mitigated this problem – the idea that managing the Euro crisis might cause social hardship in the short term, but would, in the long term, eventually pay for everyone. This line of thought validated the assumption that solving the Euro crisis by implementing austerity measures was a positive sum game.

A main outcome of this saw the Euro crisis intensify mutual dependencies between the centre and the periphery of the EU. Crisis-ridden Eurozone members in the periphery became dependent on the support of the Member States in the centre, who forced them to accept all conditions they imposed – take Greece, for example. Furthermore, the dependency of the centre on the periphery also increased as its economic failure was perceived as endangering the common currency as a whole.  In the years the Euro crisis unfolded, it is clear that political elites’ overriding interpretation of this mutual dependency between the centre and periphery was a fear of contagion; the perceived danger of which justified their methods of crisis management.

But there is an important asymmetry build into this mutual dependency, which became more and more manifest as the Euro crisis dragged on. Though there was always a certain element of centre-based dominance, at the beginning, the balance of power was relatively neutral. This increased, however, during the course of the crisis, for the centre was able to reduce its dependency on the periphery, whilst no analogous chance existed of this happening the other way around. Quite the contrary: as the crisis continued, the dominating banks in the centre were able to reduce their exposure to risky debtors, providing central Eurozone members more room to politically manoeuvre, and the periphery slipped even deeper into debt. Fear of contagion was stifled by building a firewall between the centre and periphery as the new dominant mission statement of the Euro crisis management. As a result, the relationship between centre and periphery became increasingly one-sided. Regarding monetary affairs, to this day, the affluent centre of the EU still dominates the periphery.

The Schengen crisis revealed further dependencies between the centre and the periphery which are much easier to understand. A degree of permeability of the outer border of the Schengen area is the decisive factor of the dimensions of the EU’s refugee ‘crisis’. Once people have crossed the border, coping with the amount of human traffic boiled down to a distribution problem. Any kind of a solidary, Pan-European solution has turned out to be impossible so far, as Member States between the centre and periphery continue bicker amongst each other. As the crisis deepened, this left room for right-wing, populist forces to sweep in and claim the reintroduction of national borders as a viable and attractive solution.

In many ways, this is a greater problem for the centre of the EU as it is the main destination of refugees and because, for a long period of time, waving people through to the centre was a dominant strategy of most transit countries on the periphery. By closing the so-called Balkan route, the problem shifted back from the centre to the periphery, in particular to Greece, being somehow evocative of the conflict between Italy and France, which resulted from the Lampedusa-problem in 2011. Beside all those zero-sum-conflicts, there were also attempts to understand the management of the Schengen crisis as a positive-sum game. This is the driving narrative behind interpretations that an influx of refugees is useful for receptor countries as a much-needed labour force, for example. Of course, there are good arguments that immigration has a long term positive impact on the labour market and the system of social security of a receiving country. But there are very few powerful interests supporting such interpretations. In the course of the Schengen crisis, zero-sum solutions are politically dominant, and – as the endless conflict and the EU’s failed implementation of binding quotas reveals – are difficult to overcome.

What are the consequences for the geopolitical structure of the EU? The Schengen crisis reveals the centre’s strong dependency on the periphery. In the perspective (at least) of the centre, three problems have to be solved. Firstly, the EU is obliged to transform its dependency on neighbouring countries into a new, balanced relationship of political exchanges. Achieving this will be costly, both financially and in terms of integrity, as the  EU-Turkey deal on “irregular migration” of 18th March 2016 already shows.

Secondly, strengthening the Member States with outer EU borders has to be enforced. This is a technical and administrative problem and it touches on complicated questions concerning the relationship between national sovereignty and post-national border regimes. In effect, this requires additional financing from the centre and abstaining from important aspects of sovereignty from the periphery. Indeed, extending Frontex competences is on the horizon.

And thirdly, the centre of the EU depends on the willingness of all EU-members to share the burden of the Schengen crisis. This is far from being self-evident, for some EU members’ resistance to accept refugees approximates self-exclusion. In the long run, this opposition surely will contribute to a downgraded membership within the EU, thus further fortifying the EU’s already existing geopolitical pattern of concentric circles.

Regarding the Euro crisis, the centre’s policy of first and foremost restoring creditors’ trust is seen as an indispensable and functional precondition for the continuation of the common currency. Resolving the crisis was a matter assigned to ‘experts’, whose knowledge provided insights into complex relationships and, for the most part, resulting advice of political strategies to which there was “no alternative” (TINA-arguments). It was therefore much easier to shift the costs of the crisis management towards the people in the periphery in order to preserve creditors’ trust and alleviate the burden of economic hardship from their base in the centre.

At a glance, there are stark differences between the Euro and Schengen crises. The Schengen crisis is dominated by particular national interests, complicated compromises and difficulties in finding a common denominator for a “European solution” for the refugee problem. The Euro crisis and its management is driven by ‘expert’ knowledge, where the discovery of  “Sachzwänge” (“practical constraints” – which hardly encapsulates the implications of this German term) politics meant  having to obey for the alleged long term interest of all. In the Euro crisis, the periphery depends on the centre. In the Schengen crisis, the centre basically depends on the periphery. At least in monetary terms, the Euro crisis is predominantly concentrated at the expense of the periphery, whilst the Schengen crisis is concentrated at the expense of the centre. At this point, the effect of the two overlapping or crossing crises is obvious.

Both crises give a distinction to the geopolitical structure of the EU. The Euro crisis is likely to trigger further steps towards integration in the centre of the EU, which automatically highlights increasing differences between Member States, both inside and outside of the common currency, as we have perhaps seen mostly starkly with the case of Brexit. Attempts by non-Eurozone members to secure some rights to co-determination concerning Euro-affairs will be thwarted by self-marginalisation or self-exclusion – seen with Poland, and again, Great Britain. Inherent to the Euro crisis is the possibility of ejections or exits from the common currency, but the Schengen crisis attenuates exactly this threat. It creates a strong interest for the centre in maintaining a large buffer zone and exacts payments from the centre to the periphery. And finally, the Schengen crisis leads to intense attempts to enlarge the buffer zone outside the EU, hence starting a next round of expansion without enlargement. As a result, these crossing crises, far from demolishing the EU, are likely to lead to a closer integration in the centre, and an expansion of a broader periphery, with manifold political and economic graduations in between.

The Anxieties That (Dis)Unite: Terrorism and the Forces of Integration Welfare and Social Issues
By Judith Sargentini, Michal Berg

In a rational world, security threats might boost European integration, given their cross-border nature. Today’s Europe, however, is different.

A shadow looms over Europe. Everywhere, new borders are sprouting up overnight like mushrooms. 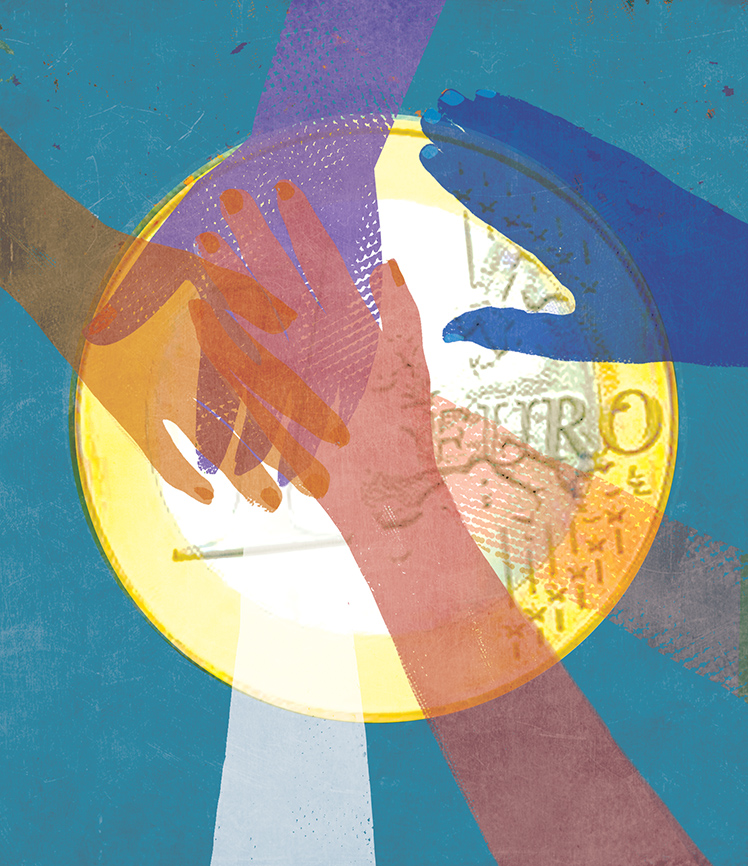