Welfare and Social Issues
By Will Kymlicka
All info
EN

Before we can tell whether multiculturalism is strengthening or weakening solidarity between the people of a particular society, we need to acknowledge that there were deficits of trust and solidarity long before multicultural policies were adopted. Such policies are potential tools for overcoming the historic deficits in trust and solidarity. A discussion between Krisztian Simon and Will Kymlcika about the nature of minority rights and the prospects of multiculturalism in the new member states of the EU.

Krisztian Simon: You argued that minority rights are in accordance with basic liberal norms as long as they are practiced as an external protection and not as an internal restriction. But how could these two be separated? The state can not look into every family home and check whether some members of the group were forced to live with their protected cultural rights, like, for example, Muslim women wearing the niqab.

Will Kymlicka: There are questions of principle and practice here. In principle, a liberal theory of minority rights cannot grant the Muslim community the legal right to insist that its female members wear a niqab. A liberal theory cannot accept that any group would have the legal right to restrict the basic civil liberties of its members. A liberal theory rules out such “internal restrictions”. But we know that in practice, even if the state does not grant a group the legal right to force its members to wear a niqab, there are non-legal social processes by which members of a group put pressure on other members of the group. This happens under the radar of the law. While they do not have a legal right to impose that behavior, there are nonetheless forms of intimidation, pressures or threats that members of the group can exercise on other members. This is a very serious issue for a liberal society, but it’s an issue that arises in relation not just to minority groups but also to majority groups, and indeed reflects a structural dilemma inherent in liberal societies.

A liberal society by definition creates many social spheres, including the family and informal associational life, that are not under the direct control or supervision of the state. Within these spaces, stronger members of a family or ethnic group can exercise power over others. Think about a conservative patriarchal family within the majority group, where the man considers himself as the head of the family, and uses threats or intimidation to control the behavior of his wife or daughters. It’s difficult for the state to identify forms of coercion that go on within a family or within an ethnic group, and it would be too intrusive to put policemen into every family to monitor how husbands are treating wives, or how brothers are treating sisters. All democracies, whatever their ethnic composition, face this problem. And the usual solution involves a combination of (a) trying to change illiberal attitudes over the long-term; and (b) in the meantime, ensuring that weaker members of society can effectively access police, social services or the legal system when their rights are threatened. These are obviously imperfect solutions in practice, but I think the principle is still clear. We do not want to grant minorities the legal power to impose illiberal restrictions on their members; and we need states to do what they can to protect members from private coercion, recognizing that that’s always an unfinished task.

Multiculturalism is premised, in part, on the idea that because the historical relations between ethnic groups have been often antagonistic and hierarchical, containing processes of discrimination and stigmatization, we cannot take for granted that there are feelings of solidarity and trust across ethnic and racial lines. In order to address this problem, we need to identify the reasons why people have not historically felt strong feelings of trust and solidarity cross ethnic, racial or religious lines. Multiculturalism policies are in part intended to address these underlying causes, and thereby build trust and solidarity by encouraging mutual respect, mutual understanding, and by reducing barriers to participation. It may be true that in the very process of trying to tackle inherited feelings of distrust and antagonism, those policies inadvertently strengthen feelings of difference and ‘otherness’.

Couldn’t these multicultural rights, by creating stronger identities for minority groups, hinder the symbiosis by conserving the deep historically conditioned hatreds. Is there still place for any reforms inside the groups?

Successful forms of multiculturalism – or at any rate, the ones that I want to defend – are tied up with ideals and principles of democratic citizenship. They are not just about giving symbolic recognition to diversity, or celebrating ethnicity in and of itself. Rather, multiculturalism is about enabling citizens in multiethnic, multi-religious, multi-faith, and multinational societies to interact in a free, democratic and mutually respectful way. It is not a matter of freezing in place the structure of relationships between two groups, or freezing the behavior or attitudes within each group – it is not about freezing either inter-group relations or intra-group relations. On the contrary, it is about democratizing both of those. It is about giving people the space – the legal rights and the institutional mechanisms – by which issues of diversity can be contested or debated and can be renegotiated on the basis of norms of civility and respect. The goal is the construction and consolidation of relationships of citizenship in which one recognises other members of one’s groups and members of other groups as co-citizens with whom one is involved in this ongoing process of creating freer and more democratic societies. In that sense, I think multiculturalism is quite transformative.

In your book Multicultural Odysseys you wrote that declarations of minority rights are involving a set of minimum standards below which no state should fall. The respect for minority rights is one of the preconditions for post-Communist countries to rejoin Europe. The Eastern European countries have accepted everything the West demanded to get into the EU and the NATO, but once they are inside their tolerance seems to wane.

There are different dynamics at work here. From a purely legal point of view, the minimum legal standards adopted by the Council of Europe in its Framework Convention for the Protection of National Minorities are not dependent on the processes of EU integration. The legal standing of the Framework Convention is independent of whether a country is in the EU. However, it is a rather weak document – the minimum standards really are very minimal, and furthermore have no real enforcement. This is separate from the role that minority rights played as one of the “Copenhagen criteria” for post-communist countries to join the EU. In this accession process, the EU made up its own rules, country by country, about what countries needed to do to meet this criterion. In some cases it was very minimal, but in other cases was quite substantial.

This particular form of minority rights conditionality had a powerful effect, since so many countries wanted to get into the EU, but as you suggest, it only really works in the period before countries become a part of the EU. Once countries are in the EU, they can backtrack on some of these commitments, since the EU does not have any ongoing process for monitoring minority rights within member-states (as opposed to candidate states). So I agree that the period of significant improvement in minority rights in post-communist counties was a short-lived period, primarily relating to EU accession, and that we are likely now to see a period of minimal progress, or perhaps even retreat. However, as I said earlier, even if EU conditionality is no longer relevant, all countries are still required to comply with the Council of Europe’s Framework Convention, and I think that those (weak) minimal standards are likely to stay in place.

Pavel Barša quotes that the Czech Roma are in a special position amongst minorities because, on the one hand, they are territorially dispersed, which makes their case similar to the Afro-Americans in the US. On the other hand, however, the fact that they came voluntarily to Central Europe makes them similar to the immigrants in the Western World, and insomuch as they are an ethnically distinct group with a long history on these territories, they could also been classified as a national minority with the right to self-government (similar to the indigenous people).

The first question is how to understand the specificity of the Roma case compared to other types of minorities either in this region or around the world. We have international norms and best practices for the treatment of indigenous groups, for the treatment of immigrant groups, and for the treatment of traditional national minorities, but none of those provide, in my view, the appropriate model for the Roma. It is a sui generis case, it has unique historical circumstances, unique demographic patterns, a unique history and relationship to the state, and so we cannot just subsume the Roma under one of these other categories. We cannot equate the Roma with standard models developed for these other kinds of groups. We may need therefore to develop Roma-specific legal norms and political mechanisms, distinct from the norms and mechanisms that operate for traditional national minorities or for immigrants.

A second question is, once we recognise the distinctiveness of the Roma case, how do we apply it in particular countries? Pavel Barša’s argument was that the best approach for the Roma in the Czech Republic would be one which is closer to a kind of immigrant model, in the sense that there would be no real institutional separateness for the Roma. For example, they would not have their own schools or their own political parties, or their own media. Rather, the goal would be to integrate the Roma into the institutions of the larger society, and in order for that to be possible, we need to de-ethnicise ‘Czechness’ – that is, we need to persuade majority Czechs that someone who has a Roma background can also be Czech.

Barša may be right in the specific case of the Czech Republic, because he says the Roma in his country are few in number and primarily post-world-war immigrants. However, I doubt that this model is satisfactory in the case of Romania, Slovakia or Bulgaria where we are talking about hundreds of thousands of Roma who have been living there for centuries and who often are living in compact areas. In these contexts, I think we are going to be confronted with the need for, or the reality of, predominantly Roma villages, schools and possibly Roma media and political parties. And of course that is closer, although not equivalent to, one of the models for traditional national minorities. So I do not think there is going to be single model for the Roma that is going to work for all the countries in Europe. They are going to have different approaches in different countries based in part on numbers, degrees of territorial concentration, on histories of settlements and relations with the larger society.

Note: This interview was conducted by Krisztian Simon and was originally published in 2009 in the Hungarian magazine Magyar Narancs.

There is a kind of nationalism in Europe that is not only progressive, but has the potential to reinforce European integration.

The architecture of the European Union institutions is flawed.

The European Union is far from perfect – from a Green perspective – yet at times when it is threatened, we must rally to its defence as an idea and as a project. 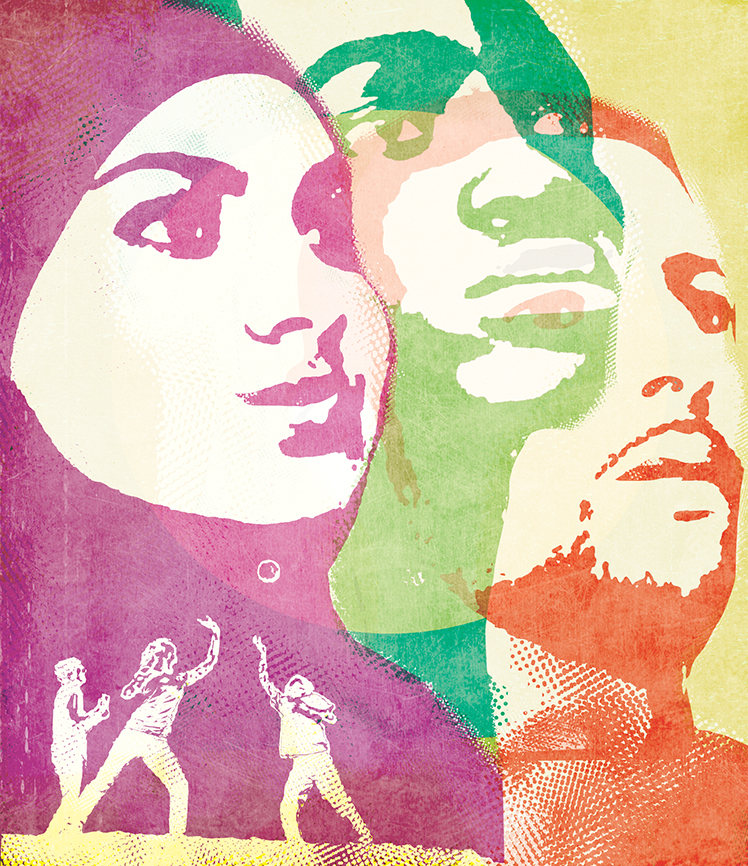