Society, Media and Culture
By Bartlomiej Kozek
All info
EN

It turned out that in order to use the ‘easy’ money from the EU it is necessary to put forward municipal money. The level of indebtedness of most of the cities went significantly up, and the authorities often decided it needs to be trimmed by cutting expenses, ie. on social services. In effect we have seen two waves, coming back and forth through the country – a wave of new aquaparks or similar ‘infrastructural’ projects and a wave of public school closures.

Along with such shifts in local politics came a lack of understanding regarding democratic participation in local policy creation. People were often surprised to know that someone cut down some trees, made room for a new supermarket in the area or argued that there were some public consultations of which they knew nothing about. Such treatment of citizens and NGOs gave fuel for a counter-wave of citizen engagement in the form of urban movements.

In order to understand this phenomenon it is useful to summarise the key findings of the book „Miasto na żądanie” (The City on Demand), that was published last year. It allows us to chart the story of the growth of urban activism in Poland, and activists’ interests in changing the paradigms that were pursued by local authorities.

Keeping the movements together wasn’t always easy. One of the sources of discussion were the tensions between the „development fora”, often stemming from Internet discussions regarding investments in the Polish cities (from roads to scyscrapers) and the rest of the activists, usually coming from protest movements wanting to block investments that in their opinion had negative social or ecological effects, such as a ringroad through the periphery of Warsaw or plans to build residential blocks in one of the main parks of the city.

This tension was followed by another one, summed up by the freelance journalist Xawery Stańczyk, who accused urban activism of being dangerously close to Not In My Backyard movements paralysing the growth of cities. He argued that it could be seen in their support for narrowing of one of Warsaw’s central streets, that in his view discriminated against people coming to the city from the neighbouring towns and villages for the comfort of people living in the city centre.

I took part in this discussion and argued that urban activism aims at redefining what progress in urban development actually means and stopping the assumption that every investment will automatically result in better quality of life.

It does not mean scrapping every huge infrastrucural investment. For example – Joanna Erbel, the candidate of the Green Party for the office of mayor of Warsaw wanted to finish the city bypass and the Kraków Against the Olympics (KPI) movement and its mayoral candidate, Tomasz Leśniak, wanted to further develop the tram network in the city.

What urban activists argue for is to shift the focus on enhancing local civic and economic life away from finding foreign investors and tourists or pursuing colossal investments aimed primarily at these groups.

Another important issue was defining what urban policy actually means. On the one side we had promoters of a narrow interpretation, sceptical to issues related to ie. local social policies or initiatives aimed at reducing inequalities. These tensions showed that contrary to declarations it is not easy to forget the old left-right divide on the local level.

To give an example – during the Green Visions of Local Governance congress, that took place in September last year Leśniak defended the public school system, which drove criticism from one of the viewers arguing that local activists should rather focus on supporting the parents’ associtations wanting to take over the schools set for closure.

This is not just a slight difference in accents, but a fundamentaly different vision of how the common good and the role of different social actors is viewed by different activists.

Members of urban movements differ also in terms of their strategies towards local authorities. For some of them cooperation with politicians responsible for privatising school canteens or allowing evictions of tenants is impossible.

Others suggest that such a strategy risks changing urban activists into a group of populist scaremongers and will in no way change the policies pursued by the local government. For them it is better to approach the authorities and neutralise the negative tendencies of backward looking clerks from the inside.

There is also an issue of political parties and a question connected to it: “Does party membership automatically exclude from being an urban activist?” The answer differs along the ideological profile of people connected to the movement and wheater they see connections between local, national and European policies or not.

On the one side you have Joanna Erbel who argued that support given for her mayoral ambitions by the Greens allowed her to more smoothly connect urban issues with the social justice paradigm. On the other side there is Jan Śpiewak – currently a member of the Śródmieście district council from The City is Ours – who argued that the local character of the movement allowed him to steer away from societal conflicts.

Urban movements – although not always directly – changed local politics during the elections last autumn. The incumbent mayors did not brag about huge investments as often as they used to and instead decided to make promises to improve the quality of life in their cities.

The way of thinking promoted by urban activists was hard to ignore. Those who tried lost. The most vivid example is the former mayor of Poznań, Ryszard Grobelny, pursuing policies aimed at large investors and appeasing the Catholic Church, who lost to Jacek Jaśkowiak – the candidate of the centre-right Civic Platform that 4 years earlier was the face of the “We, the Citizens of Poznań” movement.

Commentators analysing the post-electoral situation pointed out that those mayors who decided to focus on the dialogue between the city authorities and local activists won quite comfortably. That was supposed to be the reasons of the victories of Hanna Zdanowska in Łódź and Krzysztof Żuk in Lublin (both from the ruling Civic Platform party).

Kraków: new visions of the city

Until just recently its current mayor, Jacek Majchrowski, was one of the leaders of the push to organise winter olympic games in the city. Kraków was opening a conference hall and another entertainment hall, and at the same time it was closing some of its schools. Smog, conflicts over investments in the ecologicaly important Zakrzówek part of town, tenants’ protests – the political practice seemed far away from the leftist values one can expect from Majchrowski, a former politician of the Democratic Left Alliance.

The rejection of the idea by the voters in a special referendum by a margin of over 2 to 1 created a huge political earthquake in the city, preceeded by earlier examples of social activism – demonstrations focusing on the problem of low air quality in the city or happenings of local activists of Modraszek Kolektyw, putting on blue wings of a butterfly living in the Zakrzówek area.

But it was the emergence of the Kraków Against the Olympics initiative and its success in the fight with the propaganda machine of the city authorities that forced the local politicians to change their priorities – at least on paper.

The leader of KPI, Tomasz Leśniak, was not the only person forcing different tones of discussion about the future of the city. An MP of first the Civic Platform, and later on the liberal Your Movement, Łukasz Gibała fought for free public transportation. A former city councillor, Sławomir Ptaszkiewicz, also tried to appeal to urban activists.

A new face of the old mayor?

This difference in the political discourse was clear once someone read the election programme of Majchrowski. If one would rid him off any information regarding the candidate and statements regarding the development of the city in recent years it would be hard to believe that it is not a document prepared by some progressive local activists.

Who would have thought during the last elections in 2010 that the first point in the programme of the person ruling the second largest city in Poland would be… ecology? Or that social policies would be as important as enterpreneurship? Majchrowski even made more promises regarding public transport (6) than upgrading the road infrastructure (4) – amongst them such important declarations as expanding the tram network or creating a metropolitan rail network with new train stations.

New, huge investments are now not as important as earlier. There is a plan to create a new jobs-rich part of Nowa Huta district, but also to put up 2,300 new trash bins. In some time we should not only see a sort of „creativity cluster” in the Zabłocie part of town, but also mobile phone chargers on bus and tram stops. Kraków will – at least according the the plans of its mayor – get new parks and a Civic Centre supporting the work of local NGOs.

Strategies for the future

As one can see, the policy objectives aimed at a better quality of life in the cities can be easily taken over by the ruling authorities.

This means that urban movements need to think about their strategies how to put and keep issues on the agenda. The easiest way would be to check whether the local government is keeping its progressive promises or not. It seems like an easy tactic if, for example, the mayor is backtracking on the idea to buy 30 new trams in Wrocław or Hanna Gronkiewicz-Waltz, the mayor of Warsaw says it is impossible to curb the chaos of advertisements in the public spaces of her city.

Equally important is to find a balance between suggesting good practices from other cities in Poland, Europe and the world and creating their own ideas, suitable for local contexts. The already functioning Urban Movements’ Agreement, as well as new potential city think tanks could be helpful in this regard.

Such initiatives may be helpful also in creating a coherent „cityview” – an idea promoted as an alternative to a „worldview” on a local scale.

Such a cityview is important if local urban movements seriously think about having a long-term electoral impact. If they fail they risk driving away competent people, who might end up with mainstream political parties with no coherent plan for the cities they wish to govern.

A broad coalition seems to be gathering pace in Ireland, and extending far beyond the country’s borders, calling for a reform of Ireland’s abortion laws – the most stringent in Europe. A courageous campaign combined with a shift in public attitudes could mean real change is finally on the horizon.

Since the crash of Polish President Lech Kaczyński’s plane in 2010, a period of renewed nationalism centred around Catholicism, conservatism, and an ‘us’ versus ‘them’ mentality has taken hold in Poland. This wave of populism has led to an increase in division and violence. 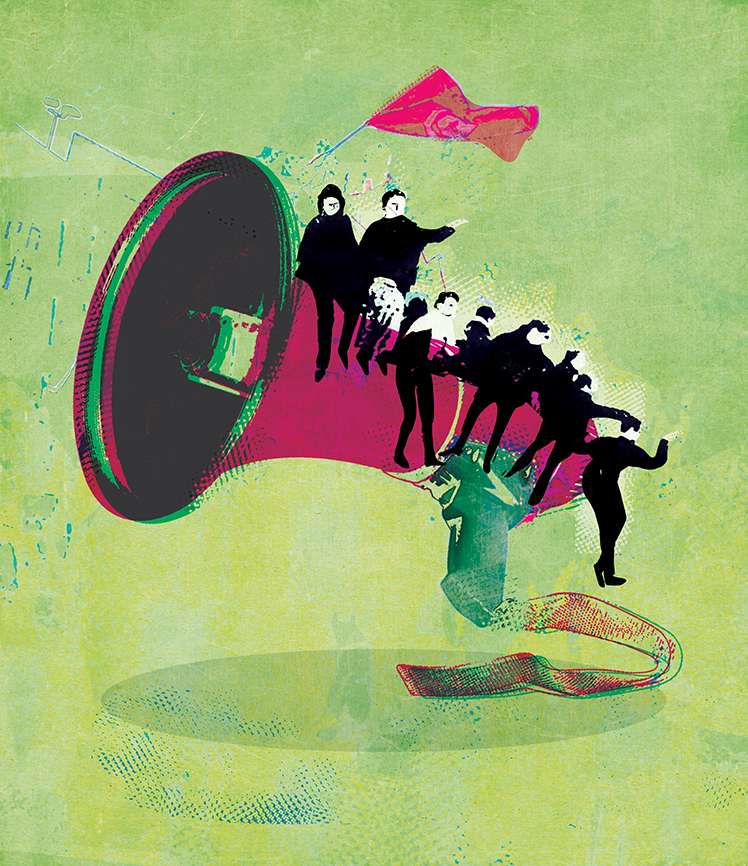