The writings of French thinker Pierre Bourdieu (1930-2002) anticipated many of the inequalities felt in today’s post-industrial societies. Despite the immense resources poured into education and record rates of university attendance, the promise of social mobility through equal opportunities rings hollow. Is it not time to think critically about the social function of education?

In today’s capitalist societies, wealth is embodied in an immense accumulation of intellectual, cultural, and symbolic commodities. Wealth involves possessing not only a plethora of consumer products (media, art, fashion, etc.) that satisfy the social and psychological needs of a large middle class, but also the intangible assets that constitute value: trademarks, patents, networks, and even skills acquired by individuals, attested by their educational titles. Although difficult to calculate, the total value of this intangible capital – which in spite of its impalpable nature consumes huge quantities of natural resources – now greatly exceeds what is attributed to mere tangible goods. Cultural capital is the intangible wealth of nations.

German sociologist Max Weber (1864-1920) foresaw how capitalism – as a bureaucratic social order aiming at maximum rationalisation – would depend increasingly heavily on its educational institutions and their capacity to issue credentials to individuals. “Cultural capital”, “social capital”, “symbolic capital”, and “human capital” are all formulas dating back to the 1960s, used in the social sciences to conceptualise or even quantify the intangible value accrued by individuals, as opposed to the pure economic value of capital in the strict sense of property and tangible assets.

Are we ready to recognise the perverse logic of the race for cultural capital?

Weber had already noticed that “class”, constructed on the basis of economic criteria alone, was not enough to explain the inequalities inherent in bureaucratic capitalism, which depend just as much on “status”. Later thinkers, including French sociologist and public intellectual Pierre Bourdieu, endeavoured to examine the relationship between economic, cultural, and social capital. It is now recognised that a high level of cultural capital can coexist with low economic capital, as is often the case in the intellectual professions. The most recent studies on social stratification, such as the one conducted by Mike Savage et al. in the UK in 2013,[1] take into account the different combinations between these three forms of capital.

The logic of cultural capital has been at work since the dawn of the modern era and the development of public administrations and universities. The investment of economic resources in an individual’s cultural formation in order to improve their condition is the mechanism of conversion and reconversion that governs social reproduction. It involves transforming one form of capital – material – into another – a capital of skills, relationships, and titles. The ultimate goal is to generate more capital than was invested at the beginning. The bureaucratisation of the modern world consequently has all the traits of “cultural capitalism”. However, free universal education, guaranteed in France since 1881 and founded on principles inspired by the 1789 revolution, was supposed to even out this kind of inequality.

The question then is whether the same investment consistently generates the same return or whether other factors come into play. Pierre Bourdieu and Jean-Claude Passeron address this question in two well-known books published in 1964 and 1970 respectively: Les Héritiers (The Inheritors) and La Reproduction (Reproduction in Education, Society and Culture). The two sociologists demonstrate that individuals enter the educational machine already endowed with the codes and skills they have absorbed from their environment. They leave this machine with greater expertise but without these initial differences evened out. Yet it is these gaps that determine the “distinction” between different socio-cultural spheres, which in turn determines social and economic differences, as Bourdieu explained in 1979.[2] Individuals with more cultural capital at the start were able to leverage it more than those who had less. Things have not improved since. Is the promise of social mobility merely an illusion?

Schools and universities make up a subsystem legitimising the political and economic status quo.

We cannot overestimate the role of education systems in our contemporary society. Schools and universities are there to transmit the shared elements of primary socialisation and the skills required by the economy based on a functional differentiation of tasks, as well as to bestow the titles that make it possible to assign duties to individuals. On the one hand, the system levels out; on the other, it distinguishes. However, the social and economic differences determined through education, which supersedes natural differences, should be justified by merit. This is then the fourth fundamental function of the educational system: the justification of the social order.

When Bourdieu denounces the contradictions of the French republican education system, the stakes are high. Schools and universities make up a subsystem legitimising the political and economic status quo. Absent this legitimisation, it is not certain whether the broader system could continue to operate. Does this educational subsystem guarantee equal opportunities? Bourdieu’s conclusion can be summed up quite simply: in France, schools and universities do not play an equalising role. The initial differences observed when entering the system are still there upon exit. Thus, the education system achieves its three most obvious functions – socialisation, the transmission of skills, and the assignment of duties – but not the fourth. If this were true, and if it came to light, the entire liberal political and economic system, known in France as “the Republic”, would be undermined.

In recent years, the debate on meritocracy has been gaining momentum. Authors such as Michael Sandel in the United States and David Goodheart in the United Kingdom have decried the unequal effects of professional selection processes, as well as their moral externalities: a lack of recognition, frustration, and class neuroses. Economists such as Robert H. Frank have analysed the dysfunctions of a “winner-takes-all society” that relies on the overaccumulation of intangible capital for the selection of its personnel. Thorstein Veblen identified and denounced this risk a century ago; Ibn Khaldun almost a millennium ago.

The conversion of cultural capital into economic capital is a complex, two-fold process. Firstly, educational institutions act as processors: they consume material wealth to produce intellectual wealth. But what translates this intangible wealth into hard cash is that there is a demand to be met. In the past, public administrations were eager to fill their ranks, and clients required the services of doctors and lawyers; today, it is the vast tertiary sector that absorbs enormous amounts of human capital.

Cultural capital investments can also result in a net loss: places in educational institutions are expensive, and people from less privileged contexts often find it more difficult to utilise their cultural capital. Moreover, the costs associated with its accumulation are only increasing, following an “arms race” logic. As a result, a mountain of sunk costs is being accumulated in order to finance a race of which the outcome is already known. A considerable amount of property, income, public and private expenditure, energy, and dreams, as well as the planet’s material resources, are consumed in this ritual that serves purely to justify the social order. It costs more and more to reproduce the world as it is.

Thus posed, the problem is far from merely being one of the insufficient resources: an arms race cannot be resolved by stocking up on even more weapons. Increased spending would only lead to widened inequalities and inflated expenditures. As early as 1964, Bourdieu refused to even consider that the solution could be of an economic nature. If we wish to deal with the perverse mechanism of cultural capitalism, it must be defused. That means slowing down the race for distinction just as we regulate financial markets and road traffic. Ultimately, this means that public and private employers would have to deal with a greater level of uncertainty when selecting new employees. Post-productivist politics too will have to think more in terms of regulation than investment.

The massive accumulation of cultural capital is inseparable from an increase in collective expenditure and an erosion of the legitimacy of the system. Bourdieu’s analysis thus reveals a deep fragility within the social order. Half a century after Bourdieu’s first studies, are we ready to recognise the perverse logic of the race for cultural capital? If we are unable to imagine a better way of guaranteeing the functional differentiation of complex societies, we will have to resign ourselves to their collapse. 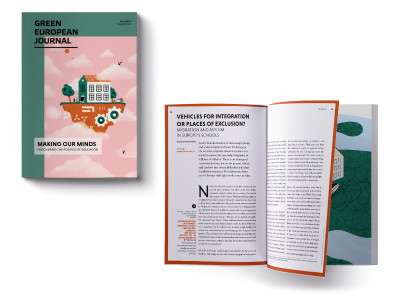 Any project of building a different society goes hand in hand with reimagining education. For Greens, this is a potential too precious to pass up.