Socrates Schouten leads the Commons Lab at Waag, an institute for technology and society in Amsterdam, the Netherlands. He previously worked for Bureau de Helling (the scientific bureau of GroenLinks) and Recycling Netwerk Benelux.

As Brussels prepares to reform its economy on the basis of the doughnut model, Amsterdam is already taking the leap with its circular economy strategy.

For the French philosopher, climate has become a defining question in politics today, shaping worldviews across the spectrum of left and right.

Big data: omnipresent but mostly invisible. How can politics catch up with Silicon Valley and get a grip on our information?

Various Dutch cities have started basic income experiments. But restrictions from central government are making some veer from the founding principle. How will it play out?

Ton Lemaire pleads for a new universal morality, which he calls humanimalism.

EN
Read more
Brexit: a Scene from the Anthropocene
By Socrates Schouten

Slightly over two months ago, the ‘Brexit’ vote took place, leaving a lot of us in horror, lethargy, or at least confusion. If our confusion has receded as time has gone by, it is because we have become used to this new reality, not because it started making sense. 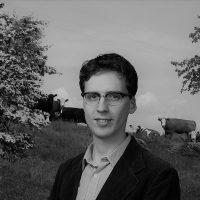