While Brexit has dominated the upcoming general election, what its form means for Britain’s place in the world has been lost in throwaway slogans and superficial debate. Christopher Hill’s latest book, The Future of British Foreign Policy, is an attempt to ground UK foreign policy post-Brexit in reality. Whatever happens, the next government will have to reckon with a new relationship with its EU partners, uncertainty over NATO’s future, and a shifting global balance of power.

Obsessed by the complications and uncertainties of Brexit, Britain’s foreign policy role has been diminished since June 2016. Foreign policy also did not figure highly in the 2019 general election in the UK. While Hong Kong burned and China herded a million Uighers into ‘re-education’ camps, it was left to the US to admonish Beijing and pass a law threatening sanctions if the Department of State deemed the former British colony not to be ‘sufficiently autonomous.’ The UK, co-signatory of the 1994 treaty, was conspicuously silent. Just before the election, allegations that President Donald Trump wants greater access for US companies to the British National Health Service overshadowed the NATO 70th anniversary summit in London. On the future of NATO, that President Emmanuel Macron warned was ‘brain dead,’ there was zero input from the UK.

‘Global Britain’ was the slogan of the Brexiteers but is a slogan sufficient orientation for British foreign policy facing its biggest challenge since the Suez Crisis of 1956? The election manifestoes of both major parties were quite vacuous. The Conservatives asserted that “getting Brexit done will allow us to do more on the international stage” while the Labour Party called for “a new internationalism” with an emphasis on human rights, international law, and tackling climate change. In neither case did the parties suggest how these priorities might be achieved in an era of reduced resources. Most estimates suggest the British economy will shrink by between 2-3 per cent because of Brexit. When asked about Global Britain, Boris Johnson simply talked about “unleashing British enterprise from the shackles of the EU.”

As global power shifts inexorably from the West to the East, Britain will struggle to maintain its present influence.

Now Christopher Hill, one of the most distinguished academics in the field, has provided some guidance to the debate, arguing that as global power shifts inexorably from the West to the East, Britain will struggle to maintain its present influence as a result of less resources post-Brexit and losing the extra leverage provided by EU membership. Hill suggests it will take some time before the reality of Britain’s situation is accepted. The UK will be unable to escape its history and geography and despite the blandishments of Trump, Britain’s interests will be inextricably bound up with those of the continent. The author notes that Britain never lost sovereignty in working with the EU on a common foreign and security policy. It was always free to go on its own but in the past 20 years it has increasingly recognised the benefits of working with European partners, whether on the Middle East, Iran, the Western Balkans, Russia, and China as well as on climate change cybersecurity and terrorism.

In the past, both Conservative and Labour governments were committed to the EU’s common foreign and security policy. Chris Patten was a highly respected external affairs commissioner. Catherine Ashton was the first EU High Representative for foreign policy. Tony Blair was the EU envoy to the Middle East for a period. And a succession of first-rate UK officials served in the EU’s foreign service, the External Action Service. Working with its EU partners, the UK played a key role in the Iran nuclear deal, in putting in place sanctions against Russia, and in securing international support for the Paris climate agreement. Even when Trump turned against climate change and the Iran deal, London held fast to the EU positions.

New ways of working with the EU will be needed, and bilateral relationships will become critical.

Now the UK will have to negotiate a close foreign and security partnership with the EU but crucially it will not be in the room when decisions are made. New ways of working with the EU will be needed, and bilateral relationships will become critical. There are precedents, including the arrangement that Norway has for consulting on EU foreign policy and then aligning itself with the results. But the UK will wish to seek influence in advance rather than merely being an observer with an option to align afterwards. It will also wish to become involved, even on an ad hoc basis, in supporting EU crisis missions, and on sanctions.

Certainly, the UK’s assets in the foreign and security field are appreciated by the other member states. Apart from its impressive diplomatic and intelligence assets, it is responsible for over 25 per cent of all EU defence spending and, with France, it is the only country capable of mounting stand-alone expeditionary forces. It also has important military planning capabilities which, were used most recently in Operation Atalanta tackling piracy in the Gulf of Aden. It is a permanent member on the United National Security Council and maintains a nuclear deterrent. Strangely there has been little debate whether the huge expense of nuclear weapons and two new aircraft carriers is justified given that the top security threats identified by the UK’s national security council are terrorism and climate change.

The EU is also changing with the new President of the Commission, Ursula von der Leyen, talking about a ‘geopolitical Europe.’ There have been significant advances in preparing for closer defence cooperation (PESCO) and a massive boost to EU funds for defence research. Meanwhile Macron has rekindled the debate about strategic autonomy and floated the idea of a European Security Council outside EU structures that could include the UK. While there has been no formal response from the UK to this proposal, London would likely prefer working with Paris and Berlin, as it did on Iran, rather than through the more cumbersome procedures involving all member states.

Paris and London currently see eye to eye on more global issues than London and Washington.

After the election both sides will take a fresh look at what arrangements might be feasible, Hill suggests that these should include specific arrangements with the EU, refreshing bilateral partnerships with a number of countries, enhanced cooperation with NATO, and ad hoc coalitions of European partners for addressing specific issues.

As partners on the UN Security Council with a shared world vision, Hill proposes that Britain should make a special effort to work with France. Paris and London currently see eye to eye on more global issues than London and Washington. While Hill does not deny the necessity of a close relationship with the US, he warns that with the decline in the UK’s influence in Europe, London will inevitably be viewed as the very junior partner. In addition, a UK-US trade deal, when London is the supplicant, could have major consequences on British domestic politics.

Hill considers that it could be politically more feasible for the UK to support greater European integration in the defence field after Brexit if the main motivation is enhancing capabilities. The UK could still play the honest broker with Washington, which fears that an EU more integrated in the defence field could weaken NATO.

In the final analysis, how the UK will be received in the EU will largely depend on the nature of the divorce. A hard no-deal Brexit that ends in recriminations will also impact on foreign and security policy. And if Johnson tries to turn the UK into ‘Singapore on the Thames’ with a bonfire of EU regulations then he will also face strong pushback from European partners. An amicable divorce will leave all options open.

Britain will also find it more difficult to deal alone with China, Russia, India, and other major powers.

Britain will also find it more difficult to deal alone with China, Russia, India, and other major powers. Theresa May visited India soon after becoming prime minister in 2016 but came away empty handed. Relations with Russia are in the deep freeze as a result of the Salisbury poisoning. The UK mobilised support from EU partners after this attack on British soil and secured their agreement to sanction Russia. This will not be so easy in future if Britain is not in the club.

China will pose a special problem for post-Brexit UK as China has invested heavily in the British economy. It is financing Hinckley Point, a major new nuclear plant, and has held out the promise of using the City of London to expand the internationalisation of the renminbi. It provides the highest number of foreign students and its tourists are the mainstay of luxury brands in the UK. And despite misgivings in some quarters, Huawei has been allowed to bid for 5G contracts. Given the UK’s growing reliance on the Chinese market there must be doubts as to whether it will be willing to pursue a critical approach to Beijing on human rights. The UK may also be left out of the new defensive trade measures that the EU is taking towards China.

In conclusion, there are few indications that the new leadership in Britain fully understands the implications of Brexit for UK foreign and security policy and this seems unlikely to change in the near future. There is a real danger of mismatch between expectations of a confident, independent role implied by ‘Global Britain’ and policies that can be delivered. Professor Hill’s previous writings include an analysis of the ‘capabilities-expectations’ gap in the EU. Now he demonstrates how this gap is likely to widen in a post-Brexit UK. While there is no better briefing material than this comprehensive survey of the foreign and security policy options facing the UK, regrettably one doubt’s Hill’s book will be read by any British political leader.

Political differences between Germany and Central Europe cannot continue to be skirted if the EU is to effectively respond to the many challenges ahead.

From Nigel Farage's Great British Countryside to the fields of Bavaria, what role does the environment play in far-right discourse? 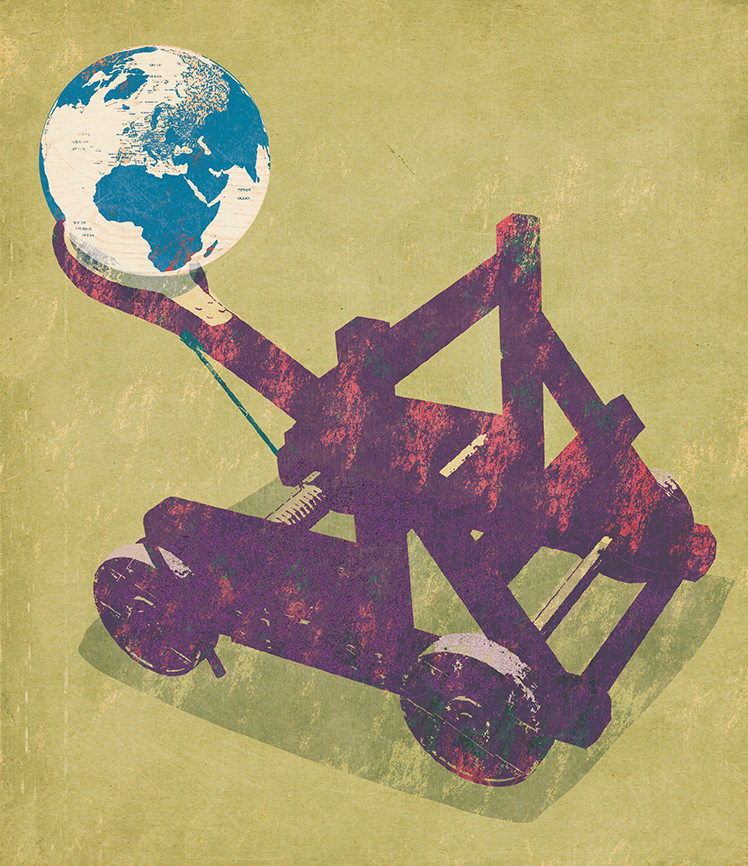