We are drowning in plastic. It is hard to exaggerate the scale and urgency of the challenge facing the world, to substantially reduce our plastics use, and to ensure we reuse and recycle as much and as quickly as possible. In the run up to the publication of the European Commission’s much anticipated plastics strategy in January 2018, highly active corporate lobbyists were granted the lion’s share of access to Commission officials.

The Commission also proactively reached-out to key plastics industry lobby groups to try to secure voluntary commitments to support its own targets, but the industry response was lacklustre. Since then, industry has also opposed a tax on virgin plastics and action to tackle single-use plastics through product bans and requirements on producers to pay for their clean-up. This is an indication of the lobby battle to come as MEPs and Member States look to turn proposals to tackle single-use plastics into law. 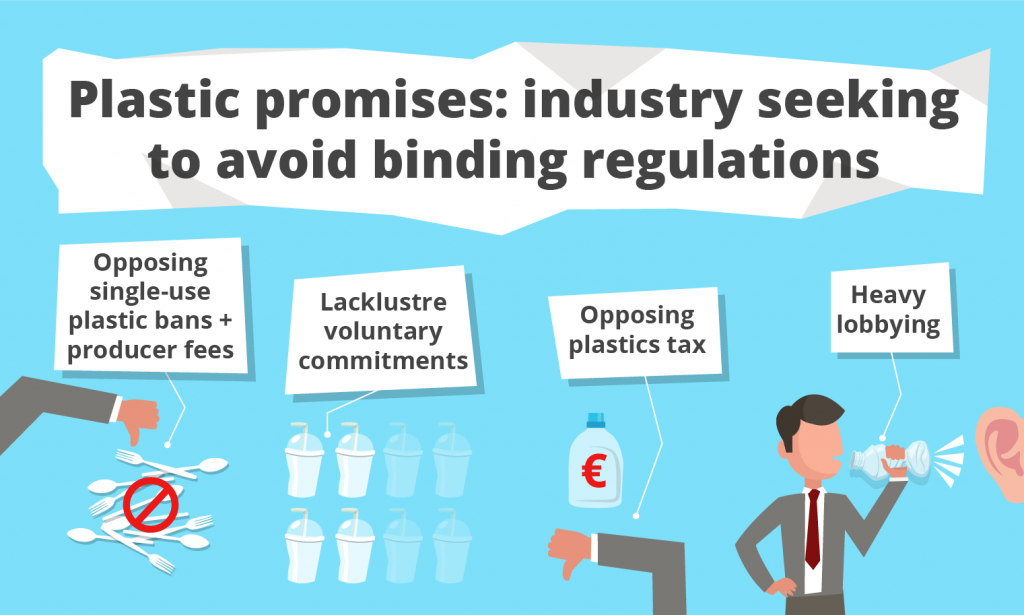 Ever since the European Commission launched the roadmap towards its plastics strategy in January 2017, plastics has been a hot topic for industry lobbyists who have poured through the doors as officials started the delicate process of drafting the proposal. In the 12 months from the launch of the roadmap to the publication of the final strategy, the Commission held at least 92 lobby meetings on the topic. Of these 92, or 76 per cent (70 meetings), were with corporate interests and only 17 per cent (16 meetings) with NGOs.

PlasticsEurope, one of Brussels’s biggest lobby groups, led the charge with a total of 13 meetings with the Commission. PlasticsEurope deploys the equivalent of eight full-time lobbyists and holds the same number of European Parliament access passes. Its members include all the big names in chemicals and petrochemicals: BASF, Borealis, Dow Europe, ExxonMobil Chemical, Ineos, Novamont, Solvay, and many others. Its self-declared EU lobby spending figures for 2016 (2017 figures not yet available) indicate PlasticsEurope has an annual lobby budget of between 1.5 and 1.75 million euros. It shares an office building with the European Chemical Industry Council (CEFIC), with whom it shares many interests and collaborates closely. 2015 leaks of PlasticsEurope’s and CEFIC’s lobbying strategies on chemicals in plastics exposed how the undermining of science had proved an effective advocacy strategy for them. CEFIC is one of Brussels’s highest spending lobbyists, and in 2017 it had five meetings with the Commission on the plastics strategy alone. 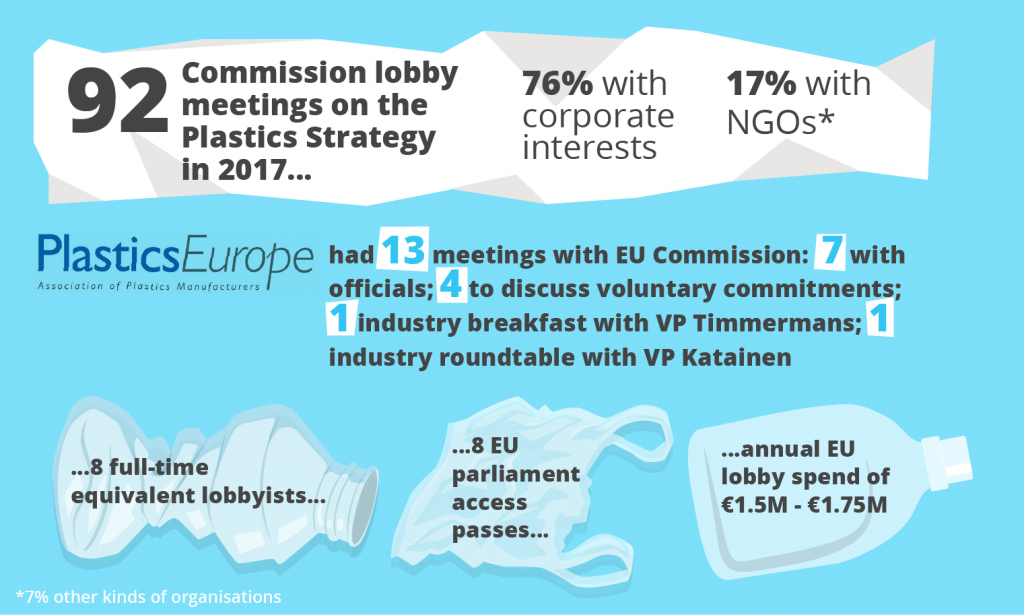 A leak of the European Commission’s draft plastics strategy found its way into the public domain in October 2017, with an eye-catching line at the top of page six: “[add here possible announcement of voluntary commitments by Plastics Europe]”. Yet when the final strategy was published in January 2018, there were no industry commitments included. What happened?

Over several months the Commission, specifically the departments DG Environment and DG Grow, had been negotiating with industry players to produce some voluntary commitments for inclusion in the strategy, specifically PlasticsEurope (whose industry members produce 90 per cent of the polymers produced in Europe), European Plastics Converters Association (EuPC, which represents plastic manufacturers and processors), and Plastics Recyclers Europe (PRE, representing the plastics recycling industry). The Commission had already committed itself to a target of all plastics packaging to be recyclable by 2030 and was keen to secure industry cooperation via the strategy of establishing voluntary commitments.

Several cross-industry platforms had been set up and visibly championed by industry with a view to developing some voluntary pledges and actions, including on polyolefins and on polystyrene. But voluntary targets and commitments are a classic lobbying tactic. Now adopted by the plastics industry, they produce the appearance of taking action and, crucially, might just convince public authorities not to implement tough regulation and mandatory rules. However, light-touch regulatory approaches by the Commission, for example for the diesel car industry or alcohol labelling, have proved to be deeply and notoriously problematic.

Correspondence and minutes released by the Commission to Corporate Europe Observatory via access to documents requests show that there was a lack of common agreement between industry players on joint commitments to be included within the plastics strategy. In November 2017, an email exchange between the Commission and industry players indicates that the Commission was eager to discuss voluntary commitments with industry. Yet there was a split within industry: while PlasticsEurope was producing drafts (the eighth version was circulated), the EuPC appeared to want to distance itself from some elements.

At the same time, DG Environment emailed PlasticsEurope’s Executive Director in quite frank terms about the draft document, recognising “that your efforts are ongoing” but saying “there is still a long way to go until this would become the ‘ambitious and credible’ commitment that we are looking for from value chain participants.” Further meetings were held with industry by Commission officials, but by January 2018 and with the plastics strategy due for imminent publication, time had run out for industry’s voluntary commitments to be included. The Commission published its strategy on 16 January 2018 and restated its target that “By 2030, all plastics packaging placed on the EU market is either reusable or can be recycled in a cost-effective manner.”

While industry’s voluntary commitments were not included within the Commission’s strategy, they were self-published on the same day. PlasticsEurope’s voluntary commitment was substantially weaker than the Commission’s; the industry expressed the “ambition” to reach 60 per cent reuse and recycling for plastics packaging by 2030, saying “This will lead to achieve our goal of 100% re-use, recycling and/or recovery of all plastics packaging in the EU-28, Norway and Switzerland by 2040”. “Recovery” in this context means energy recovery, also known as incineration, which is controversial and highly damaging for health and the environment.

The voluntary commitment by other industry players, including EuPC and PRE, also appears to be 10 years behind that proposed by the EU. While the Commission’s target is that “By 2030, more than half of plastics waste generated in Europe is recycled”, industry says it will “launch Circularity Platforms aiming to reach 50% plastics waste recycling by 2040”. And this weak objective was set despite producers of PET plastic (often used in bottles) being specifically committed to recycling and reusing of 65 per cent of its packaging by 2030.

One of the most talked-about elements of the Commission’s approach is its commitment to introduce legislation on single-use plastics, as proposed in May 2018. This takes the form of a list of products (such as plastic cotton buds, cutlery, plates, straws, drink stirrers, and sticks for balloons) which would be banned outright, and other products for which Member States would be obliged to substantially reduce use and make industry producers pick up the costs of their collection and treatment through so-called ‘extended producer responsibility’ schemes. This follows the success of existing EU rules to cut plastic bag use which, in England for example, have reduced the number of bags used by 80 per cent. 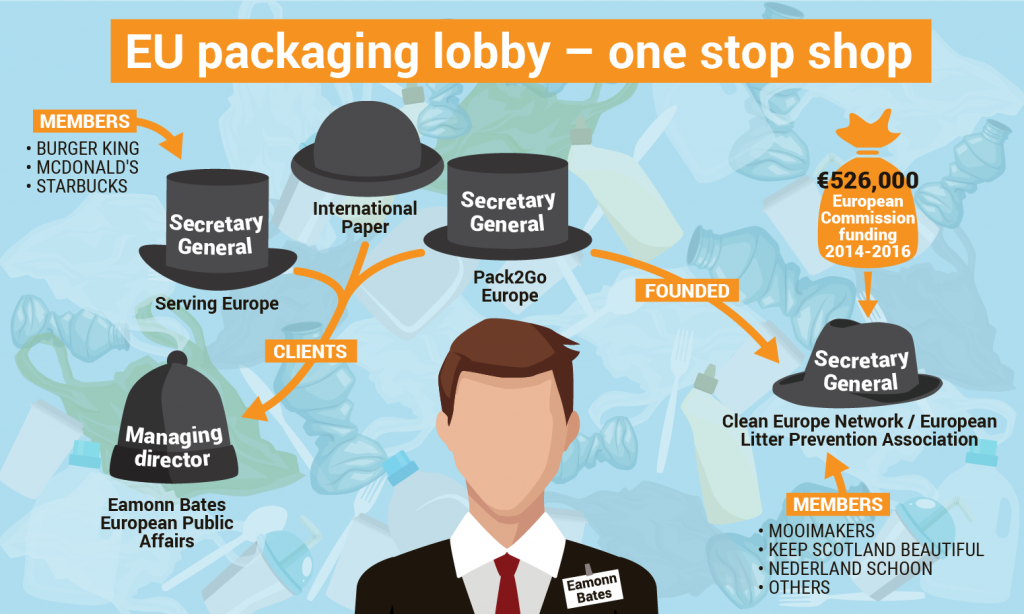 Of course, industry has been quick to criticise the move towards binding regulations. PlasticsEurope responded: “Plastic product bans are not the solution and will not achieve the structural change needed to build the foundation for a sustainable and resource efficient economy”. Along similar lines, Business Europe said: “We are concerned about some very far-reaching proposals … Rather than a ban, it is better to focus on the current voluntary pledging campaign to make plastics more circular”. Meanwhile, packaging industry lobbyist Eamonn Bates was quoted as saying:[1] “Marine litter is a major problem and it must be tackled. But product bans are not the solution … This Commission is simply looking for a few ‘fall guys’ for the press headlines rather than action based on evidence.”

In 2016, the French government passed a new law which included provisions to ensure all plastic cups and plates should instead be made of compostable, biologically sourced materials. While the French move was not perfect, it was a major initiative to try to tackle the problem of disposable tableware, and to challenge the business models of major packaging and fast food companies.  Unsurprisingly, packaging industry trade association Pack2Go opposed this through Bates, their representative, saying, “We are urging the European Commission to do the right thing and to take legal action against France for infringing European law… If they don’t, we will.” Industry pressure caused a delay but eventually France received permission from the Commission to go ahead with the ban, though only on a more limited basis.

Plastics tax off the agenda

Industry is also fighting back against another element of the Commission’s Plastics Strategy. A plastics tax was first mooted by Commissioner Günther Oettinge , who is responsible for the EU budget and is concerned about the UK-sized hole in Member States’ EU contributions post-Brexit. The final published plastics strategy included a vague commitment that the Commission would “explore the feasibility of introducing measures of a fiscal nature at the EU level”.

Such a tax is clearly opposed by the plastics industry and its allies. PlasticsEurope said: “We do not believe that this would be reasonable.… A new tax on plastics, plastic products or products containing plastics would be very complicated. In the end, the consumer would have to pay for it.” BusinessEurope also did not mince its words in a March 2018 letter to the Environment Minister from Bulgaria (which then held the rotating EU Council Presidency): “In our view, if there is one way to kill off appetite for investment in research and innovation in [sic] circular economy, it is to raise a non-material tax of which the revenues flow into the general state coffers”.

An EU-wide tax on virgin plastics does not look likely anytime soon. Disappointingly, Oettinger’s May 2018 EU budget announcement only proposed introducing a “national contribution calculated on the amount of non-recycled plastic packaging waste in each Member State”, which places the emphasis on recycling rather than a reduction in overall plastic production.

While the plastics industry is reluctant to be seen to be on the wrong side of public opinion on the hot topic of plastics, it is no doubt hoping to delay or even derail tough proposals to tackle plastics, including legislation to ban certain single-use products. We know that when the Parliament and Council discussed the plastics bag ban a few years ago, they were subjected to serious industry lobbying on the topic, with lobbyists joining forces with the MEPs and Member States unwilling to take action. It is likely that the industry, including producers of single-use plastic products, are already gearing up for a similar fight.

This is an edited version of an article first published by Corporate Europe Observatory.

Beyond Recycling: Rethinking Plastic From the Ground Up Environment
By Delphine Lévi Alvarès

An interview with plastic waste campaigners who call for curbs on plastic production to effectively contain plastic pollution at source.

The digital space needs to be regulated according to a new set of principles that protect fundamental rights but also user freedoms.

As the Covid-19 crisis saw the price of oil plummet, consequences for plastic recycling – and more broadly the transition to a circular economy – may be grave.