This spring, the Balkan region was deeply shaken by catastrophic floods. In Serbia there were 57 casualties[1], 485 homes were totally destroyed and 16,000 were heavily damaged. Lost livestock and crops, contaminated environment and enormous material damage reaching over 1.5 billion euros were also incurred. A donor conference in Brussels resulted in 195 million euros being allocated for Serbia and Bosnia and Herzegovina, and 14 EU member states sent their help directly during the emergency. Western Balkan states collected internal help as much as possible, but months later after the disaster people are still suffering, homeless, resettled, jobless, and desperate for a minimum of everyday stability and hope. The disparity between social classes in affected areas has already increased. Is there a space for questioning whether all of these consequences could have been prevented or reduced? At least to mainstream Serbian media, this issue does not seem worthy of addressing.

A natural phenomenon, an unnatural disaster

Whatever the political tampering with science, the supposed “naturalness” of disasters here becomes an ideological camouflage for the social (and therefore preventable) dimensions of such disasters, covering for quite specific social interests. Neil Smith, “There’s no such thing as a natural disaster”

For the last 14 years, each Serbian government was invariably focused on the accession to the European Union. Two decades ago, the discourse of a dramatic break up with the socialist past was followed by the violent dissolution of the Socialist Federal Republic of Yugoslavia together with its complex and firm system and administration. A few years later, bringing down the nationalist conservative regime, and the eagerness to become a progressive European country combined with an exhausted economy, led to the beginning of privatisation of the financial and production sector and negligence for the public infrastructure investment. Climate justice, or shock doctrine is not something you hear often in Serbian media, political or even academic debates. Nevertheless these concepts may be needed to deconstruct the unfortunate events from last May. Let us start from the causes.

The increased frequency of extreme weather incidents has already been proven to be caused by climate change. One does not need scientific calculations to figure that nature itself is not the one causing it, and how to distribute the responsibility for pollution and prevention. The floods in the Balkans occurred after severe rainclouds poured what would be an average amount of precipitation for 3 months in only 48 hours of constant rain. This is, historically, the highest amount of rainfall in Serbia in the last 120 years.

Nevertheless, Serbian legislation recognises floods, even of this size, as predictable natural phenomena for which safety and prevention measures are mandatory. This primarily means that the infrastructure has to be constantly maintained and urban planning must comply with the environment. To illustrate the responsible role of the state in this task, Novi Beograd, a modernistic municipality of 300,000 people, built  from the swamp during the 60s by volunteer brigades led by publicly-owned companies[2] and lying almost below the Sava river surface, was almost untouched by the floods, whilst a few kilometres upstream, Obrenovac was suffering the hardest consequences of flooding with human victims. Apart from taking care of the big protection systems and the following infrastructure, another task in prevention of catastrophes such as floods and landslides is to control deforestation, thus slowing down the water flow into lower-lying areas. Having good quality forestry legislation has been shown to be insufficient for preservation of Serbian forests in practice, not speaking only of individual illegal activities, but including the projects allowed, subsidised or even led by the institutions that are supposed to act in the public interest.

In June, one month after the devastating floods, while visiting Serbia and making an assessment of the country’s progress in membership negotiations with the EU, President of the European Commission José Manuel Barroso unequivocally marked the chapter on the environment as the most challenging one since very few moves were made in this field. Several months earlier, when presenting his three-hour-long exposé, newly elected Serbian Prime Minister Aleksandar Vu?i? took no effort in mentioning anything remotely related to environmental problems, pollution, energy, sustainability, not to mention climate change.

The acknowledgment of responsibility of the governing structures and institutions however does not go along with recent calls for help “from above” in saving us from the floods of “biblical proportion” by the Government on publicly transmitted sessions. During the emergency there was also enough space in the media for the Serbian Patriarch to blame the floods on the winner of the Eurovision song contest, together with Belgrade Pride parade scheduled for late spring.[3] Other media content referred to the material and infrastructure damage that will undoubtedly push the state into deeper public cuts, unavoidable loans and social crisis.

Another tendency in mainstream debates had its highlights during the crisis – accentuating the inefficiency of the public services (as such, excluding the political context under which they are functioning) only to present privatisation as the solution bringing productivity and expediency. In line with this discourse, companies publicly offered their services to compensate for the public shortages, i.e. Coca-cola providing water supplies and Monsanto sending seed stocks. In this situation of media contamination with “Shock doctrine” propaganda, radio-amateurs and social media users reacted quickly, and soon enough we could access reports from the spot, live and authentic. This did not last long, as new instruments for control were imposed – legal accusations of citizens for spreading panic. Several people were detained simply for their posts on social networks that were marked as scaremongering.

A question often raised after the first shock was – where was the scientific community to alert the rest of the citizens of the lapses in safety before the chaos? A possible simplifying answer might be: atomised. Due to the state of public academic institutions, professional services, communal companies, competition is much more frequently observed than cooperation. Budget limitations and cuts are not a fertile ground for academic independence and conscious devotion to informing the public. And even if they did so, would their warnings emerge as a priority on the politicians’ agenda?

A friend in need is a friend indeed

One thing from the high positions was clearly addressed to the citizens – you need to show solidarity, but the way you should do it is up to you to decide. And the appeals related merely to the individual aid. Even though legally the emergency procedure allows the government to co-opt big stacks of essential necessities regardless of whether they are from private or public companies, it decided to surpass this possibility and support the citizens individually, according to their own possibilities, to buy drinking water, food, hygiene products and medications for those hit by the floods. This opened the door to the misuse of the emergency, several private merchants opportunistically raising the prices, or simply bigger companies gaining more profit from the increased consumption.

The call for volunteers was a common platitude used by the government representatives, but on many occasions, unplanned sending of the willing people around the city and country resulted in their frustration by the lack of tools and coordination in overcrowded sites. Nevertheless, this did not affect tens of thousands of volunteers, who were mostly young and noticeably diverse in culture, class, race and political views. The myth of the lazy, willingly unemployed youth was debunked in practice. With the lack of structural support, these people constantly worked for days and weeks without any official acknowledgement of their efforts. Improvising everything they could, from tools, meals, safety protection, to shifts, procedures and communication, volunteers brought self-organisation at a high level. Maybe a level that imposes some serious systemic questions on their thoughts after a hard day’s work? Above all, this solidarity was not reserved only for local communities. From the very beginning of the events, people of the Western Balkans immediately showed readiness to help each other. Long before other European states were even informed of the severity of the floods, people of  Bosnia and Herzegovina, Serbia and Croatia, together with local communal services exchanged scarce emergency resources and human power even though they were all more or less affected by the same disaster.

The most natural thing to emerge out of the catastrophe was not the unpredictable devastating force of nature, but the empathy and solidarity among humans living and working together. Hopefully this unfortunate event will not leave us blind to the attempts to keep us atomised in inequality, but help us to rethink our priorities as communities and make us realise the power of collective acting and planning.

[1] More than a half of these were noted as “natural” deaths in Serbian Government reporting, since they were not direct drowning, even though they were obviously related with the conditions during the emergency, non-existent or late health assistance.

[2] The public property that was put into practice during the highlights of Socialist Federative Republic of Yugoslavia. For better understanding it can be rather translated as “social or communal property”. The concept includes goods and attainment that belongs to the people, the community in general. Although it is often wrongly equated with state-public owned property, it differs firstly by holding an acknowledgement of the origins of the values, produced by the people themselves, who are holding a right to it themselves, not the representative state organs.

The Green European Journal turned to young activists to ask how they envisage political change in this time of climate crisis.

TTIP: We Were Right All Along Democracy
By Thomas Fazi 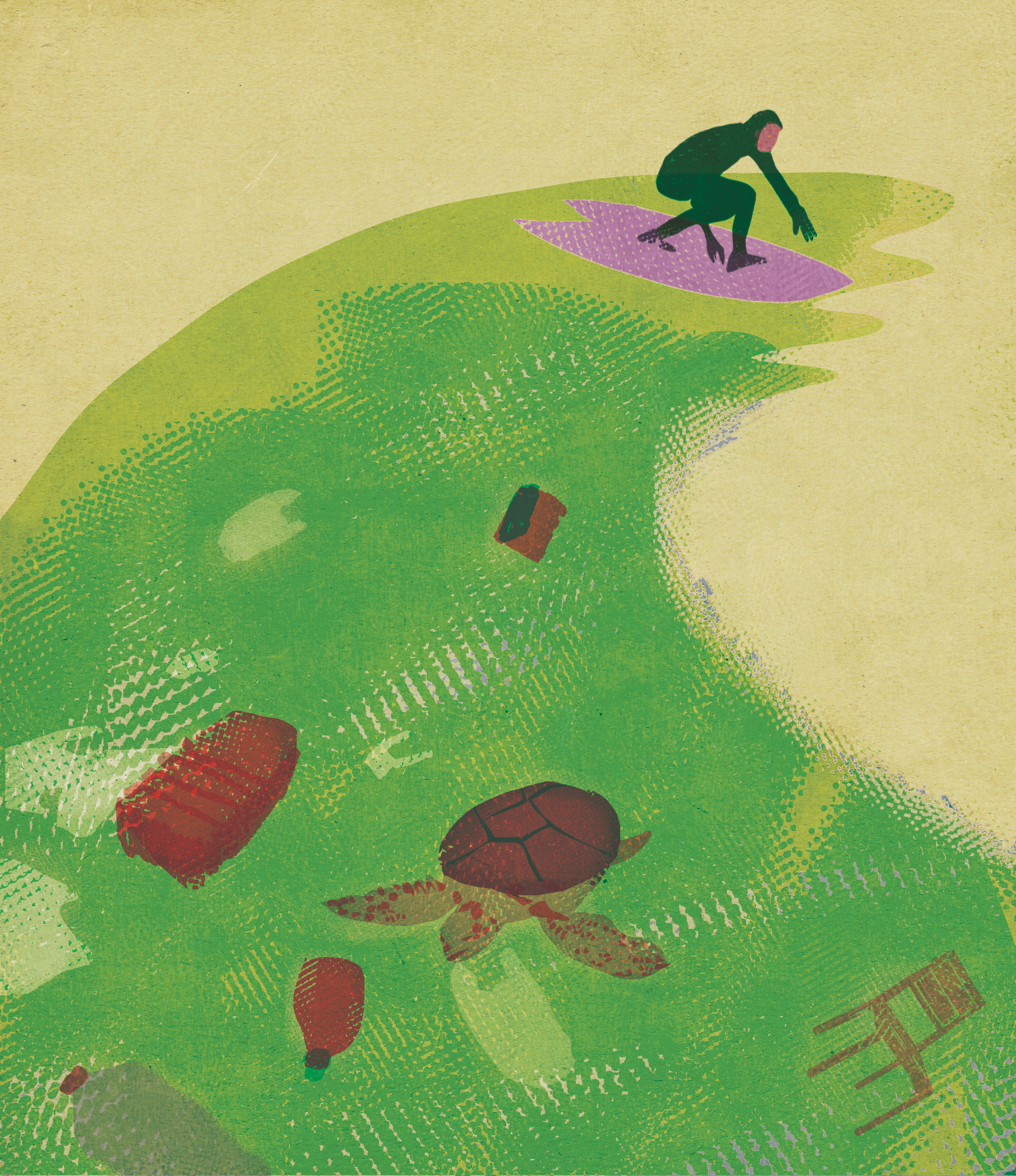