UK academics have been engaged in industrial action against pension cuts, the increased casualisation of university staff, and the gender and racial pay gap since 2017. At Goldsmiths, we have also been engaged in a struggle to make the university more democratic, accountable, and inclusive. This local movement consists of the trade and student unions as well as other collectives of staff and students. We have deployed a number of strategies for our cause: formulating proposals, for instance, on alternative governance models; developing alternative community fora involving staff, students, and members of the local community; and the occupation by students of Deptford Town Hall (Goldsmiths’ main administration building) for four and a half months in 2019 to push for racial justice reforms.

Our key demands are fairly straightforward, but they require a radical overhaul of local management, the university sector, and government policy. We envision a public education system that is unencumbered from market logics and open to everyone who wants it, and that fosters critical thought. While the university has never been entirely inclusive nor egalitarian, important reforms allowed more people access to higher education.

Unfortunately, with the expansion of neoliberalism this opening up has been turned into a profit-generating opportunity. Students are seen as income sources, while degrees have become consumer items and university workers endlessly exploitable and expendable. And with everything valued in terms of its capacity to generate money, much of the arts and humanities are treated as pointless and starved of investment. We want this to stop.

We’re not seeking special treatment for academics. We simply want to highlight the erosion of decent basic working, pay, and pension conditions. We believe this situation is further evidence of the growing divide between the very rich minority and the increasingly impoverished majority.

The administration has responded negatively. At every level we have been belittled, derided, and put down by people who build careers as university managers and consultants but who themselves do not teach or conduct academic research. Despite having much more material and structural power, they try to discredit us by portraying us as elitist academics refusing to give up privilege.

In reality, many of us – particularly those of us from ethnic minority and working-class backgrounds, women, and other marginalised groups – have not experienced this supposed privilege. We have come up through an academia that has exploited our labour, kept us on precarious contracts, worked us harder in ever-tougher conditions, and blamed us when poor management produces impoverished institutions. This situation has not just led many of us to despair; it has also made us more willing to take drastic action (including extended strike action) because we feel we have nothing left to lose. The university is failing to deliver social justice. In addition to expanding access and cultivating critical thinking, the university needs to reflect on its blind spots and privilege and on its role in making the world a better place. Through a project entitled New Social Imaginaries, a small international collective is exploring ways to do this work beyond the existing institutions. 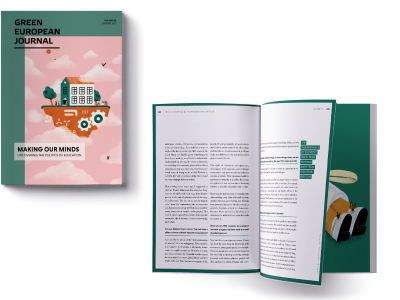 Facing unsustainable pressure and a lack of resources and decent working conditions, academics and students in the UK are taking action.

EN
EN
Will the European Just Transition Fund Deliver on Its Promise to Workers? Welfare and Social Issues
By Meike Vedder

A look at the EU's key mechanism for cushioning workers against adverse impacts of climate policies.

Object of Political Desire I: My Hypocrite Reader
Rui Tavares
On the Edge of the Sixth Mass Extinction: How Can We Prevent It?
Martin Vrba
Tackling the UK’s Insecurity Crisis
Hannah Webster, Toby Murray
“We shouldn’t be afraid of involving businesses”: Doughnut Economics in Brussels
Barbara Trachte, Benjamin Joyeux