Vattenfall is the state-owned Swedish electricity production company, which is also a major player in the European energy market. Despite being 100% owned by the Swedish state, previous governments had left the company with limited control, as the national audit office recently lamented. One consequence of this lack of management was the disastrous investment in Nuon, which caused increasing financial difficulties for the industrial giant, announcing 1000 redundancies in 2015. This mismanagement has also had a heavy impact on the environment, as Vattenfall has acquired four lignite power plants and five coal mines in Germany, which are among the biggest in Europe.

During the 2014 election campaign, the spokesman of the Swedish Green Party, Gustav Fridolin, fittingly brandished a lump of coal on a number of occasions during the televised debates, as if to say: “here’s the outcome of Vattenfall’s mismanagement by the right”. Indeed, through its assets in Germany, Vattenfall emits more greenhouse gases (88.4 MtCO₂/year) than the whole of Sweden (50 MtCO₂/year). This represents almost 10% of Germany’s emissions, or half of the reduction efforts that the country must achieve between now and 2020.

Since entering into government, the Swedish Greens have managed to negotiate for the state to play an enhanced ownership role by increasing its presence on the Vattenfall board, and by prohibiting the company to continue to expand its mining business. However, regarding the assets already held by Vattenfall, Social Democrat prime minister, Stefan Löfvén, will not hear of closing the mines. His preference is to sell them to get rid of the problem, and let the Germans deal with the issue either by themselves or with the future new owner. Clearly, for him, it is not a matter of safeguarding the climate, but to preserve the image of his country. Moreover, as the company is not doing too well financially, he would rather burden future generations with the cost of global warming than have the current generations pay for the former right-wing government’s shortfalls.

Since the September 2014 elections, the Social Democrats are not budging from their position. Despite their best efforts, the Greens have not managed to persuade their partner, particularly as they are convinced that they will be unable to gain the majority in parliament on this matter. Only the left-wing party, Vänsterpartiet, has made a clear statement for closure of the mines, whereas the right-wing parties of the former coalition are indeed reticent to acknowledge the mistake they made in the past.

In 2014 and 2015, Vattenfall did not receive significant mainstream media coverage. The Miljöpartiet leadership has simply banked on the matter petering out, hoping electors would forget about Gustav Fridolin’s lump of coal. While the 2015 Miljöpartiet Congress saw a motion voted that reminded the party that they had once wished for the coal mines to be closed rather than sold, the prime minister’s intransigence on the matter makes it difficult for Green ministers to make their members’ voice heard. The assumption seems to be that if the Greens’ government record is good enough, the Vattenfall affair will be forgotten.

It must be noted that the Swedish Greens’ governmental record is good, objectively speaking. We could mention, for example, the upcoming closure of four (out of ten) nuclear reactors, the greenest budget in Swedish history, prohibition of mineral exploration in Ojnare forest on Gotland island, expansion of wind power from 2% to 10% of the Swedish electricity mix, massive investment in sustainable housing, leadership of Sweden during the COP21 negotiations, etc.

Unfortunately, the reality is harsh: even if they have done a lot of good work, and have the intention of becoming the first developed country to achieve carbon neutrality, all of this carries little weight in the face of the 1.2 billion tons of carbon dioxide from Vattenfall coal. This is certainly the conclusion of the members of the Miljöpartiet congress, as well as numerous environmental associations. The party’s image has been terribly undermined by this affair. Friends of the Earth Sweden (Jordens Vänner) has just appointed Miljöpartiet for its 2016 Greenwash award; Greenpeace has publicly criticised the party’s breach of faith, PUSH Sverige has attacked the party on social networks; Sweden’s largest environmentalist Association, Naturskyddsföreningen, has even sent warnings to the Swedish Greens. On a daily basis, academics, intellectuals, civil servants, are penning articles in the national media contradicting Green ministers who claim they lack the legal means to act.

In short, Swedish environmentalists are in a very tense situation with their electoral base, which is also reflected in disastrous poll results. With barely 0.5% of voting intention above the 4% threshold, the possibility that the Swedish Greens will no longer form part of the next parliament in 2018 cannot be ruled out. The poor poll results can also be explained by other factors aside from the Vattenfall case, but it is clear that the dissatisfaction of the actually engaged electoral base poses a real threat.

The problem has escalated since Vattenfall asked the government on 18th April for permission to sell its coal assets for around two billion euros to a Czech company, EPH. The Sandbag Climate Campaign revealed that this company, which is based on a complicated tax structure and largely located in tax havens, has no environmental charter and even plans to expand mining, against which Vattenfall was committed.

Yet the majority of the Swedish population is in favour of the closure of coal mines, as well as NGOs, the Church of Sweden, many intellectuals and even some movements related to the Social Democratic Party as well. So, why does Miljöpartiet not take the lead in protesting against this issue, as it did last year on the matter of non-renewal of military agreements with Saudi Arabia? This had enabled the Social Democratic ally to be swayed. One reason is that, weighed down by a violent media offensive against several of its leaders, Miljöpartiet has lost its self-confidence and its ability to influence the debate.

It is likely that one problem stems from the total silence on the part of the German Greens on the issue. While the German Social Democrat Vice-Chancellor Sigmar Gabriel, clearly expressed in the Swedish media that he was opposed to the closure of mines, the silence of the Grünen leads Swedish opinion to believe that Germany is unanimous on the subject. Ende Gelände proves that this is obviously not true, but the Grünen’s absence from Swedish media is incomprehensible. Clearly, demonstrations at the mine site are necessary, but why not intervene in Sweden, where the decisions are made? The European Green Party has recently started to communicate on the issue by publishing on its website a rather discreet letter right after its Council in Utrecht. But where are the leading figures of European ecology in the face of the most important climate issue across Europe, upon which the Greens have the chance to take direct action? The role of the European Greens should be to Europeanise the debate and remind the public that the IPCC report explicitly states that to keep global warming below 2°C, 80% of fossil fuel reserves must be kept in the ground. If a European government with six Green ministers cannot do this, then how will we ever convince European voters that environmentalists hold the solutions to global warming?

The Vattenfall affair needs to be seen as a challenge for the European Green Party. Maybe it is time for the EGP to be more active in bringing out bilateral collaborations between its members – between German and Swedish Greens in this case, but also among all member parties in general. The EGP could also play a role in raising the global warming issue at the European level. We cannot be satisfied with every national party working only on national targets; we need European collaboration. We cannot continue to blame European institutions for always doing too little, too late, if we ourselves are not able to help each other, especially when the climate and our collective reputation are at stake. It is unfair to leave the Swedish Greens to face this battle alone, when it concerns us all.

The European Greens’ interest in the Vattenfall affair is all the more pressing in light of a second and equally explosive case. Following the announcement by the German government to phase out nuclear power and power plants’ closing schedule, Vattenfall’s profits are believed to have been adversely affected. Taking advantage of the existence of bilateral agreements between Sweden and Germany, Vattenfall began proceedings against the German state for 4.7 billion euros of compensation. This trial is not only held before the German courts, but also before an arbitral tribunal of the WTO. As the “trial” takes place behind closed doors, the German Parliament has no access to the dossier and cannot ensure that the government is actually doing everything it can to defend its interests. The fact that a European state-run public company should bring proceedings against another European state for a democratic decision is deeply shocking and should be challenged by all European environmentalists. The positions we take against the arbitral tribunals planned under CETA and TTIP will be totally ridiculed if judicial proceedings on which Green ministers have power to act were to compromise the German energy transition.

Vattenfall could either become a symbol of failure by European environmentalists to collaborate and help each other; or by contrast, it could be the proof that, by working together, it can bring about the ecological transition that the Swedish and German people are working towards in their own respective countries.

As we approach the early December COP climate summit, Bert Metz explains what the recent IPCC report on global warming means for the planet, the economy and for Europe.

ENTR
Read more
ENTR
Read more
First in the class, but not best in the Class – The EU’s Proposal for the 2015 Climate Conference in Paris Climate and Energy
By Silvia Brugger

A relationship with, not against, nature should be one of the core principles of ‘green growth’. 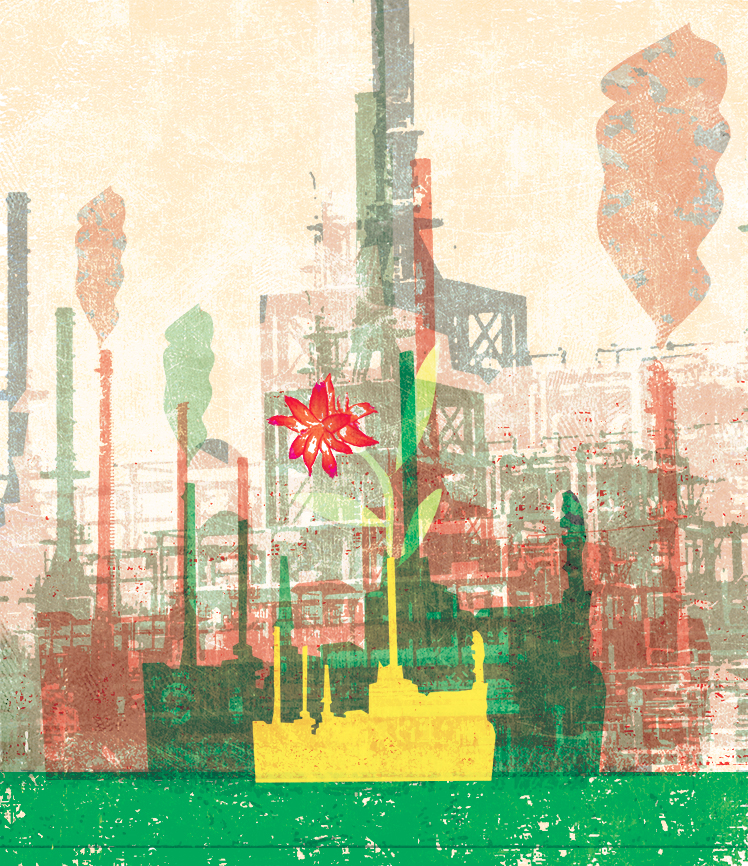