A small country by the sea finds an enormous supply of oil off its coast. An oil bonanza lies on the horizon. Mindful of the fact that the proceeds to be had from this black gold are of a temporary nature, the country’s government decides to store the revenues in a fund. The money amassed will be invested in a ‘knowledge economy’ so that future generations may profit from the proceeds generated by the oil find. The government’s revenues and its expenditure are available publicly and are decreed by Parliament. In the ideal world.

But often things take a different turn. The discovery of oil or gold in a country without good governance generates inequality and conflict rather than prosperity and peace. This phenomenon is known as the curse of raw materials. The chances of quick gain from the trade in raw materials leads to corruption. Executives filling their pockets have no interest in regulating the mining of raw materials. And why should they set up a system to levy income tax – with the risk that taxpayers demand accountability for the money spent – if they simply can trade a few extra barrels of oil to buy off protests to poor public amenities?

The focus on fluctuating profits from raw materials curbs investments in other sectors. Economic diversification is also hampered by the Dutch disease: competitiveness is undermined by the increase in value of the national currency as a result of the export of raw materials, as the Netherlands experienced after the discovery of a natural gas field in the 1960’s.

A country such as the Democratic Republic of Congo could well become rich thanks to its mineral resources. The Congolese soil is rich in coltan, gold, tin, tantalum and wolframite, minerals indispensible in our computers and mobile phones. However, the trade in raw materials is laden with corruption. All layers of civil administration get a piece of the pie. The incumbent powers are challenged by rebel groups, who fight the government and each other bitterly, supported by neighbouring Rwanda. The rebels finance their jungle war with the illegal trade in mineral resources, the so-called conflict minerals. Meanwhile, the Congolese population looks on helplessly as their soil is being plundered and the country remains in the grip of corruption and conflict.

Wars over raw materials are not confined to Africa. The Heidelberg Institute for International Conflict Research calculated that out of 414 conflicts going on in 2013, 90 were linked to natural resources. In Afghanistan rebel groups get their revenues from the trade in precious stones like emerald and ruby. Control over goldmines earns the Colombian FARC some 20 percent of its income. Mines under rebel rule are the most damaging for man and the environment, owing to a complete lack of legislation. The mining of conflict minerals often goes hand in hand with slavery, exploitation, child labour and sexual abuse.

If the mining of raw minerals so often leads to gross violations of human rights and damage to the environment, wouldn’t it be better to do away with pickaxe and shovel? At least until such time when countries have established the institutions to make sure the money earned from raw minerals is used for development? But what about the mineworker making his living and the government seeing the bottom of the coffer? As long as poverty is rife and international demand for raw materials increases, appeals to leave the mineral resources in the soil fall on deaf ears. To mine or not to mine, it’s a decision taken by countries independently. And who would dare hamper the opportunities of a given state to develop itself? After all, we know that mining can generate wealth and prosperity. The discovery of diamonds in Botswana has saved a large part of the population from destitution. By trial and error, Botswana is trying to keep a larger share of the value chain in the country itself. Apart from exporting rough stones, it is attempting to keep the polishing process inside the country.

Botswana was relatively well-governed the moment that mineral resources were discovered. Development on the basis of raw material revenues can only come from within and is only possible if the countries rich in raw materials succeed in creating democratic political and economic institutions, says James Robinson, economist and co-author of the best-seller Why Nations Fail. He doesn’t foresee the latter happening quickly. The economist Paul Collier, author of The Bottom Billion, is more optimistic. He believes governments in mineral rich countries realise more than ever that they have to use the revenues in order to make their economies less dependent on mining and that economic diversification is needed to become less vulnerable to fluctuations in the prices of raw materials.

So, warding off the curse of raw materials is first and foremost a national concern. Efforts from the outside, however, can indeed help to break through the negative spiral of the mining of raw materials, corruption and conflict, and turn the curse into a blessing. Development cooperation aimed at good governance, fighting tax evasion by multinationals, the conclusion of fair trade treaties – all of this lies within the responsibility of the industrialised countries buying the raw materials.

Transparency is a prerequisite in tackling the evils. That’s why the 2014 European transparency and accounting directive commits multinationals in the oil, gas, mining and forestry sectors to country-by-country reporting. The companies have to publicise payments settled in countries in which they are active. Consequently, it’s easier to pillory both multinationals channelling profits and governments embezzling revenues related to raw materials.

In addition, legislation is needed for chain transparency. Since the introduction of the US Dodd-Frank Act in 2010, businesses quoted on the stock exchange are forced to disclose details on the use of minerals from the Democratic Republic of Congo and its neighbours. The companies concerned have to publish whether the minerals in their products contribute to the financing of rebels. The obligation to report is based on directives for sound supply chains of minerals from conflict areas, set up by the Organisation for Economic Cooperation and Development (OECD).

As early as 2010 the European Union pledged its support for the OECD directive, but a legislative initiative was long in the making. After repeated appeals by the European Parliament the European Commission in 2014 presented the long-awaited proposal. Unfortunately, this merely concerned a voluntary reporting scheme for only a small number of companies using conflict minerals. The interests of trade and industry lobbying against new ‘administrative burdens’ were given priority over the maintenance of human rights in conflict zones.

Voluntary initiatives won’t work, as development economists Robinson and Collier agree. A SOMO study (Dutch Centre for Research on Multinational Corporations) indicates that since the publication of the OECD directive only thirteen per cent of European companies using minerals have adhered to the guidelines. Binding rules can really achieve something, Collier argues. The US led the way, but American legislation alone cannot clean the whole market. Robinson believes that noncommittal systems only function as window–dressing.

Businesses would only benefit from unambiguous legislation. The costs companies run up for reporting on conflict minerals – 0.014% to 0.154 % of turnover in the first year and 0.011% to 0.127% in consecutive years, according to European Commission estimates – will drop considerably if companies participate. Companies wanting to play the game fairly no longer need to wait to go it alone in finding the origin of their minerals, but can work together with other players in the field. An end will be made to unfair competition by reckless firms who couldn’t care less about human rights.

In the case of conflict minerals, the consumer can hardly be expected to take responsibility in his search for clean laptops, smart phones and GPS systems. Conflict-free electronics are hardly to be found on consumer markets. Governments should take responsibility by introducing rules which make the entire market conflict free. Then it’s up to companies to adhere to these rules and up to the consumers to pay a little more for clean products.

The European Parliament chose to opt for a different course from the Commission’s. In May 2015 it voted for an ambitious package of measures, forcing all companies using gold, tin, tantalum and wolframite to report about the minerals’ origins. In line with the OECD directive, companies have to ensure from beginning to end that they play no part in wrong-doings. In forcing all the companies to participate, we can clean up Chinese industry in the process: those who supply Europe with minerals will have to comply with European demands.

Now that the European Parliament has taken a stand, it’s up to the 28 member states in the Council of Ministers to formulate their position. The talks between the European Parliament and the Council of Ministers have started this autumn and will, in all probability, still be going on during the Dutch presidency of the Council in 2016. Ms Liliane Ploumen, the Dutch minister for Trade and Development Cooperation, will then be able to prove that she’s serious about her agenda on corporate social responsibility. Unfortunately, she’s taking sides with the wrong people, namely conservative trade and industry. The Dutch government’s viewpoint is totally in line with the feeble proposal submitted by the European Commission. The Dutch Parliament has said that the position taken by the Commission is too weak. That’s why we’re hopeful Ms Ploumen will dedicate herself to legislation which will genuinely make the minerals in our products conflict free.

The mining of finite raw materials such as metallic ores may lead to our descendants being left empty-handed. In developing countries, future generations are doubly disadvantaged if the mining of raw materials leads not to economic development, saving the population from widespread destitution, but instead to corruption and conflict. As long as grinding poverty exists, it is pointless to plead for the reserves to be left untouched. The fact of the matter is, however, that the proceeds are much needed. What’s more, every state has the sovereign right to determine what it does with its mineral riches. The possibility to turn the curse of the raw materials into a godsend does indeed exist. Developing countries must not be denied that opportunity.

From the Netherlands to China, the industrialised nations, wholesale users of raw materials, are responsible for the sustainable mining of raw materials, safe for man and environment. Transparency in terms of mining is a prerequisite. Binding laws of transparency can sap rebels’ incomes and force multinationals to operate responsibly in developing countries, increasing the chance of mining to act as a driving force for local development.

Paul Collier and Jamie Drummond, ‘Tackling corruption will fast-track progress on the millennium development goals’, in: The Guardian, 22 December 2010.

There is no Planet B Climate and Energy
By Liesbeth Beneder, Richard Wouters

Much to the surprise of everyone, the strongest protests in Romania’s late transition were related to environmental destruction. 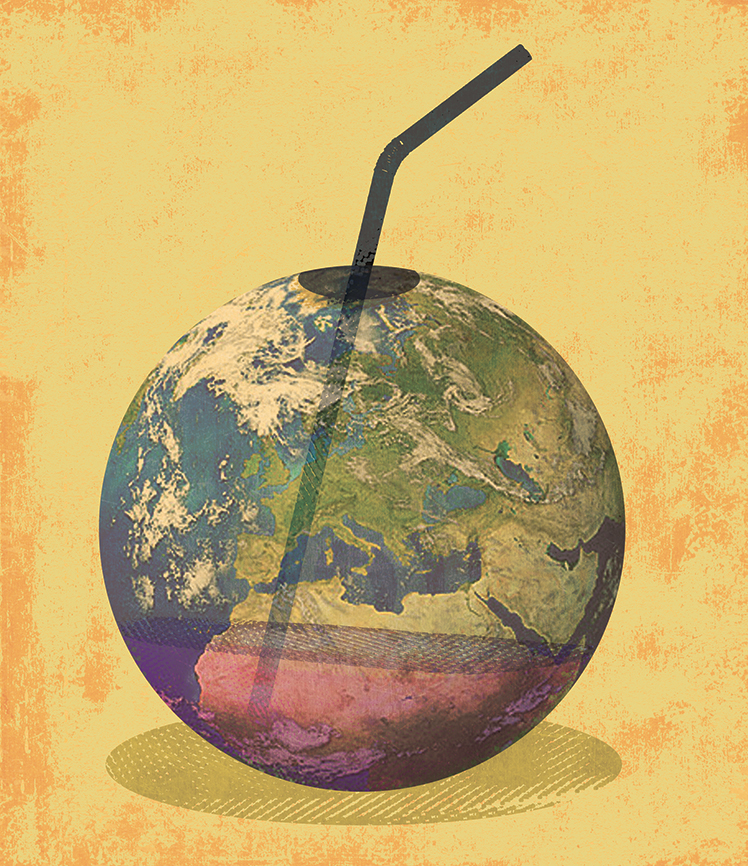