Climate and Energy
By Don Lehr
All info
EN

2018 will mark three years since the Paris Climate Agreement was signed. This excellent analysis of COP 23 sheds valuable light on what climate talks achieved in 2017, key details that remain unclear, and where the important divisions lie between the negotiating parties.

The 23rd meeting of the Conference of the Parties, the latest edition of the UN Climate Change Conference better known as COP 23, was held from  November 6 to 17 in Bonn, Germany. The government of Fiji held the presidency, the first time that a small island nation has done so.

This was the second COP since the adoption of the Paris Agreement at COP 21 in 2015. The landmark agreement aims to hold the increase in global average temperature to well below 2 Celsius and pursue efforts to limit the increase to 1.5 Celsius above pre-industrial levels. It entered into force on November 4 2016, three days before the start of COP 22 in Marrakesh, Morocco.

As of January 11, 173 parties have ratified the agreement. Of the 197 countries taking part in the negotiations, 195 originally signed it. Nicaragua initially argued it was not strong enough but acknowledged that there is no alternative to the agreement and ratified it just before COP 23. Syria, embroiled in civil war since 2011, signed on November 7, leaving the United States as the only country which has rejected it. The United States cannot officially withdraw until November 4 2020, one day after the next presidential election.

It was expected to be a transitional and technical COP – and it was. Delegates began the complex task of writing the so-called ‘Paris Rulebook’. Scheduled to be adopted this year, the rulebook will detail how all of the elements set out in the agreement will be achieved.

The main COP decision – to be known as the Fiji Momentum for Implementation – contains three elements: a call for more action from developed countries in the run-up to 2020, a reiteration of the work programme agreed in Paris, and the design of the Talanoa Dialogue.

Fiji brought vision to this technical COP through the Pacific tradition of talanoa, a word derived from tala meaning ‘talking or telling stories’, and noa meaning ‘zero or without concealment’. In the Fijian context, frank expression without concealment, through face-to-face dialogue, can lead to all participants understanding each other’s feelings and experiences.

The Talanoa Dialogue will monitor the collective efforts of countries in implementing the Paris agreement. The dialogue is a test run for the ‘Global Stocktake’ which, from 2023, all countries will conduct every five years to assess national efforts to reduce emissions. It will allow developing countries to keep track of what steps developed countries have taken since 2015, before they too begin to take action in 2020.

Work began on the Paris Rulebook, which will be crucial in determining how the agreement is implemented and how progress is monitored. Negotiations covered, among many items on a lengthy agenda, how ‘nationally determined contributions’ (NDCs) will be counted, and issues around transparency, the Global Stocktake review mechanism, and compliance. Over the first seven days, countries proposed all of the rules, principles, and procedures they want included. These opening proposals have been annexed to a COP decision.

Another part of the rulebook creation is entrusted to the Subsidiary Body on Scientific and Technical Advice. This advisory body is made up of diplomats with scientific expertise and focuses on ‘enhancing ambition’, or working out where greater efforts to reduce emissions can be made. An important provision of the agreement establishes ‘internationally transferred mitigation outcomes’, which would allow “a ‘buyer’ country to finance lower-cost emissions reductions in another country”. Observers at COP noted the numerous references in the body’s text to cooperative approaches “outside the NDCs”. These repeated references could open the door to countries counting financial support for non-state actors such as CORSIA, a UN aviation emissions offsetting scheme, towards national targets.

Good news on agriculture and for communities on the ground

A breakthrough early in the second week after five years of what could only be called bad faith negotiations on agriculture came as a genuine surprise to many observers. Developed countries stepped back from their opposition to long-standing proposals from developing countries and agreed for the subsidiary bodies to “jointly address issues related to agriculture, including through workshops and expert meetings” and to take “into consideration the vulnerabilities of agriculture to climate change and approaches to addressing food security.” The decision on agriculture means that scientific talks can now begin and the UN will be able to provide more strategic support to countries that need it.

Civil society observers and activists with a handful of allies in governments continue to push for inclusion of the human rights language from the preamble of the Paris Agreement into the rulebook. Meanwhile, civil society, human rights defenders, and representatives of human rights institutions held side meetings to establish a narrative that frames climate change as a human rights issue and to discuss legal avenues for holding big polluters accountable for human rights abuses resulting from climate change. It was encouraging to see real progress achieved throughout COP 23 in investigations and court cases of strategic climate litigation around the world.

After several negotiating sessions over the first eight days of the COP, and with the spectre of failure hanging over the negotiations, a final push propelled negotiators to agree on a Gender Action Plan. Building on the language of the Paris Agreement, the Gender Action Plan reminds countries that gender-responsive climate policy requires strengthening across all areas from implementation to decision-making. Most importantly, the plan recognises that women need to be represented in all aspects of the COP process, and, in order to increase its effectiveness, gender must be mainstreamed through all relevant targets and goals.

The need to strengthen the efforts of local communities and indigenous peoples in responding to climate change was recognised in the Paris Decision text, which established a platform for the exchange of experiences and best practices. On the back of highly successful talks on advancing the platform this past May, and the decision to create the platform was finally adopted. The Local Communities and Indigenous Peoples Platform is a small step towards recognising and respecting the perspectives of indigenous peoples in the COP process.

The outcome of the negotiations on long-term climate finance – continued efforts by developed countries to raise 100 billion dollars each year until 2020 – were predictably unremarkable. The talks made no substantial progress on moving faster before 2020 or on mobilising the 100-billion-dollar annual goal. No significant announcements of additional climate finance contributions were made beyond some support for the Adaptation Fund and the Least Developed Countries Fund. An opportunity to build more trust between developed and developing countries before 2020 was missed.

The final decision on ‘loss and damage’, finance available for people affected by climate change, is hopelessly weak. The sole concrete result is an ‘expert dialogue’ in 2018 to explore how finance might be secured. The bottom line is this: there is no guarantee of financial support for those affected by catastrophic disasters or even for the body tasked to find that money.

COP 23 saw many attempts to promote quick techno-fixes for the climate crisis (such as nuclear energy, carbon capture and storage, and solar geoengineering) at side events and ‘climate action’ spaces. There were also, encouragingly, lively debates between academics and civil society on how to achieve the target of limiting the increase of temperatures to 1.5 Celsius above pre-industrial levels. These debates targeted the fossil fuel and energy sector, transport, agriculture, lifestyles, financial institutions, economic growth, and many other out-of-the-(climate)-box ideas. Members of the Convention on Biological Diversity Alliance expressed their alarm over increased talks of geoengineering in an open letter entitled “Geoengineering is a distraction from the real priorities – emission reductions”.

A tale of two COPs

COP 23 was actually one COP in two zones – Bula and Bonn, two kilometres apart. The Bula zone was the site of the official negotiations while the Bonn zone hosted dozens of civil society kiosks and hundreds of events. According to the official list of participants, 16 028 people were registered – 9 202 delegates, 5 543 from observer organizations, and 1 283 media. An additional 5 940 people were accredited for the Bonn zone only. Thousands more participated in off-site events, marches, and demonstrations throughout the two weeks.

The call for an end of the fossil fuel era throughout numerous events in the Bonn zone echoed the messages of the People’s Climate Summit from November 3-7, the Climate March that saw 25 000 people on the streets in Bonn on November 4, and Ende Gelände, a peaceful mass civil disobedience action against open-pit coal mining in the Rhineland, from November 5-7. All of these events expressed a message of global solidarity and climate justice, and highlighted feasible alternatives to a corporatist approach to climate negotiations offering false solutions to the climate crisis.

The author would like to thank Teresa Anderson, Kate Dooley, Sébastien Duyck, Lili Fuhr, Stephen Leonard, Julie-Ann Richards, Anne-Laure Sablé, and Hans Verolme for their contributions to this analysis.

COP 23 turned out to be more about regulations than revolution - but some advancement gave cause for hope.

We spoke to the Secretary-General of ICLEI, a global network of cities and local actors working together against threats such as climate change.

EN
Read more
EN
Read more
The COP 21 is over… Or is it only just beginning? Climate and Energy
By Michel Genet

And so, the COP 21, the Paris talks on climate change which have been on everyone’s mind for the past 15 days are over but already registered in limbo for some. Will these talks really go down in history, as Hollande has repeatedly claimed? 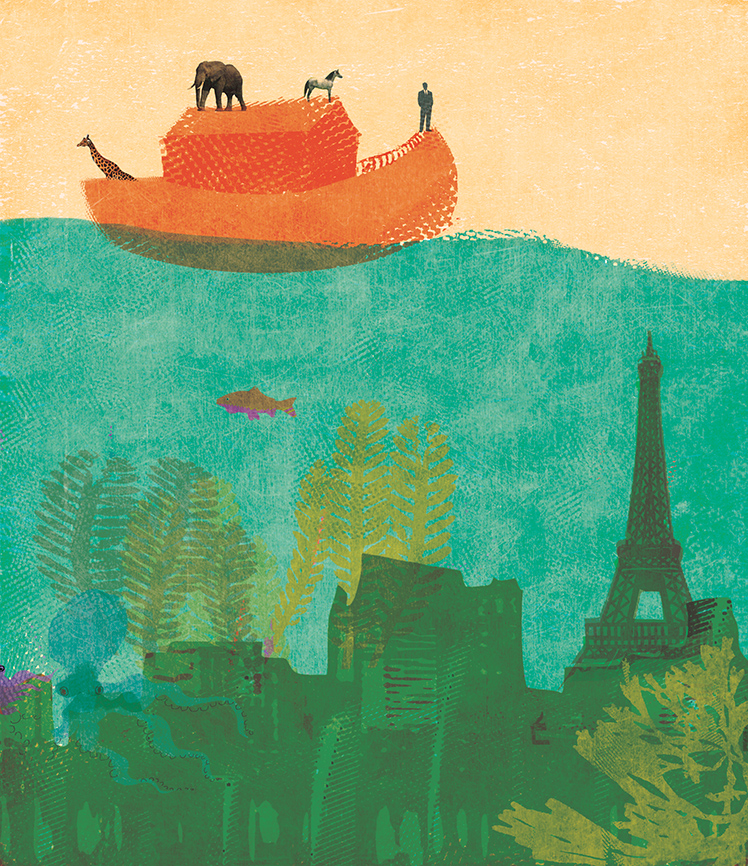