Daniel Cohn-Bendit was a member of the European Parliament from 1994 until 2014, representing both the German and French Green delegations in rotation.

The right to asylum is not a numbers game, it is a human right.

DEENFRNL
Read more
“We will manage!” – The challenge of integration
By Claus Leggewie, Daniel Cohn-Bendit

The conflicting messages of welcome displayed by the German government towards refugees is hindering integration processes, for the state, the refugees and the citizens. For the sake of all three, accepting the situation is the only way of moving forward.

The specificity of ‘democratic radicality’ is by no means a bulwark for the Greens against developments or rationales that run counter to this ‘democratic requirement.’

The neo-liberal Taliban have brought Europe to its knees. For the first time in its history, the European idea has been weakened to the point that its survival is now at risk.

Europe’s difficulties are undoubtedly causing a rise in populism and Euroscepticism, and while it needs to be more democratic, it needs to push for a more tolerate and humanist future; built through education, exchange and understanding.

EN
Read more
Manifesto for Rebuilding Europe from the Bottom Up
By Daniel Cohn-Bendit, Ulrich Beck

In this proposal, initiated by Ulrick Bech and Daniel Cohn-Bendit, a group of pro-Europeans argue for a form of active citizenship to promote European democracy and resolve the political crisis that continues to grip the European project.

The Greens must remain faithful to their European commitment by continuing to promote a European alternative to the austerity policy of the ‘Merkozy’ duo. But passing on an unsustainable debt to the future generation is just as ecologically unsound as leaving a planet in ruins. Whatever their differences, the Greens must present their alternative to the neoliberal’s prioritising of market forces and the “statism” of the old left. This alternative must begin with a recovery package funded by a tax on financial transactions.

This afternoon whilst strolling in the university gardens I had a most extraordinary, if not hallucinatory, encounter! 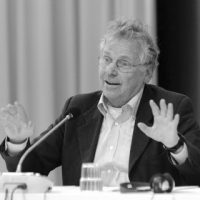