Isabelle Durant is the deputy secretary-general of United Nations Conference on Trade and Development. Formerly Belgium’s deputy prime minister and minister of transport and energy, she also served as vice-president of the European Parliament and was a senior consultant on the empowerment of women.

On the paradigm shift that awaits, a common-sense approach to rebalancing the troubled structures of international trade in the global economy.

An interview with Isabelle Durant. Great upheavals have occurred and are still occurring in the Middle East: the successive revolutions and counter-revolutions of the Arab spring, the lightning emergence of ISIS, the agonies of the Israeli-Palestinian conflict, the stagnating civil war in Syria. How do the Greens analyse the situation?

ENFR
Read more
Pathways to a Europe of the Citizens
By Gesine Schwan, Isabelle Durant

The time has come to review the democratic workings of the European Union. Ideally, this should be the subject of a new Convention, but it is also possible to strengthen, here and now, European democracy.

Europe’s difficulties are undoubtedly causing a rise in populism and Euroscepticism, and while it needs to be more democratic, it needs to push for a more tolerate and humanist future; built through education, exchange and understanding.

Nothing seems to disturb what feels like a silent coup d’état carried out with the tacit consent of 27 Heads of State and Government. 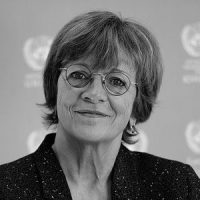