In Europe as across the world, transport systems are changing with huge implications for our daily lives and urban spaces. While new technologies help drive this shift, transport’s future remains open and multiple. From here to 2049, current possibilities, argue transport experts Yoann Le Petit and Jens Müller, offer the opportunity to rethink not only how we move, but why.

Predicting the future is a difficult exercise. When the first railway lines were built on the European continent in the 1830s, many believed that passengers would be unable to breathe if trains were to run faster than the speed of a horse. German Emperor Wilhelm II famously said in the early 20th century that cars were a temporary phenomenon, but horses would be there to stay. Today, these predictions make us smile.

Nevertheless, most of today’s transport policies are based on similar thinking. National and European transport strategies take for granted the assumption that people will continue to drive and fly forever, and that the number of containers transported can only increase. They conclude that the best we can do is adapt to this future by improving technologies and infrastructure.

It is time to leave behind this narrow viewpoint and take the future for what it really is: the result of our choices of today and tomorrow, something to be written and not predicted. Both the challenges and possibilities of our era should stimulate our imagination and help us develop an appealing vision for how we will move in 2049. 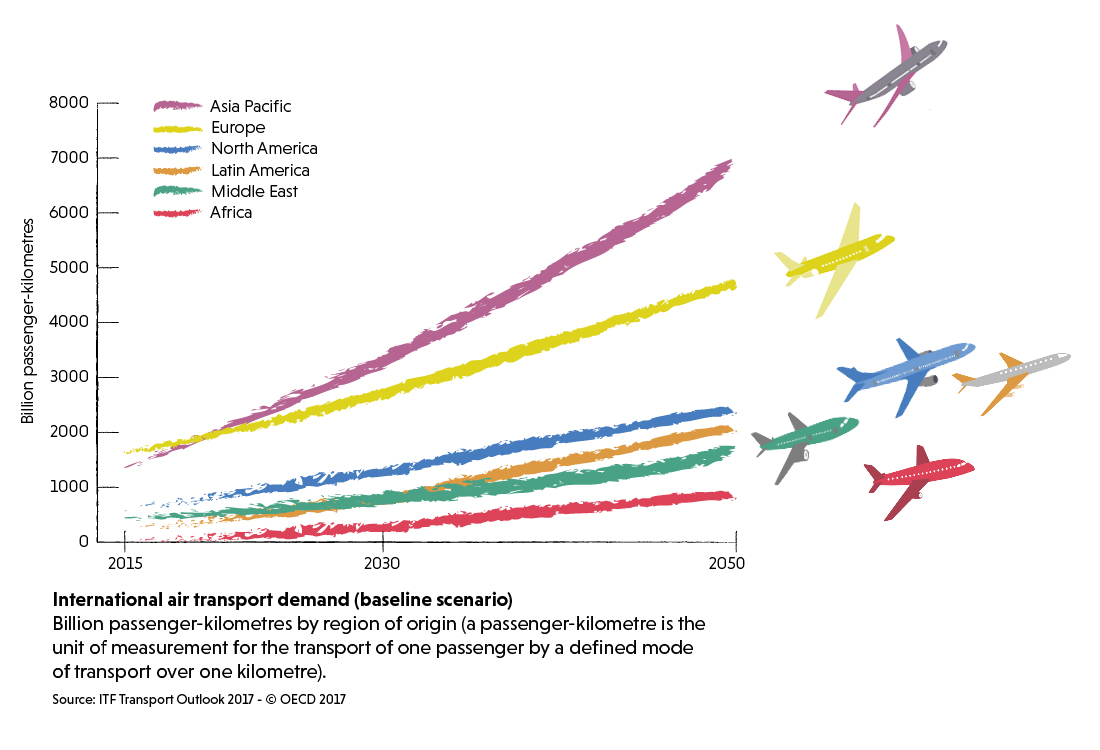 A fresh look at mobility

Now is an opportune moment to step back and rethink our mobility because, for the first time in decades, we can rewrite fundamental principles and policies. The decisions that we are about to make on shared mobility, autonomous delivery systems or electric cars, bikes, and pedal scooters will have a profound effect on our century.

New technologies are the most visible facet of the ongoing transformation. Drones can now deliver medicine to remote islands or victims of natural disasters. Truly self-driving trains, trucks or cars suddenly appear within reach. And Hyperloop projects, such as the one recently unveiled in Spain, are being tested to shoot people through tubes at more than 1000 kilometres per hour. This would cut travel time between Madrid and Barcelona to just 25 minutes and may eventually bring European capitals closer to one another.

Some of these developments seem like science fiction becoming true. But even more fascinating than the technological changes are the more fundamental, truly ‘futuristic’ questions that they force us to address. At the end of the day, transport flows are rarely about the physical movement itself but about deeper needs and desires in our lives – about seeing our loved ones, going to work, purchasing a product or travelling to foreign countries. Those needs and desires may be affected in ways we can hardly imagine now.

Just think about a few of the questions that we may be confronted with: will people still want to move as much once this is no longer necessary? Why travel, if hologram meetings become so good they are indistinguishable from a meeting in person? Will we want to transport goods around the globe if a 3D printer in our neighbourhood can produce them within minutes? 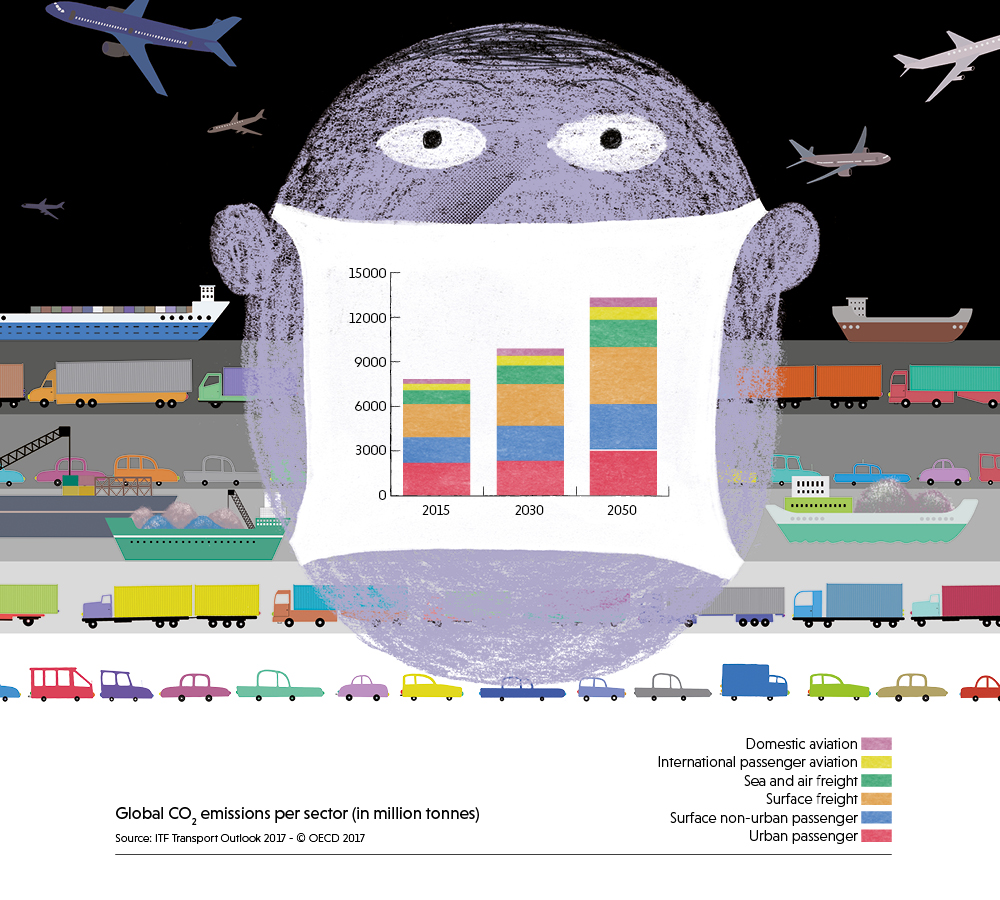 Our mobility could see a radical change, and change often scares us. But when looking at transport today, the prospect of something different becomes rather appealing. Just look at the faces of today’s commuters: for many, the daily drive to work has become a time-consuming and stressful obligation that depends on costly subsidies for company cars. On average, Europeans spend between 17 (in Finland) and 45 hours per year (in the UK) in traffic jams. This not only dictates the rhythm of their lives, but also puts a serious strain on everyone’s health. In most European cities, road transport is one of the main sources of air pollution which still causes almost 400 000 premature deaths every year in the EU. Not to mention that transport is now Europe’s biggest climate problem, as the sector has achieved no reduction in greenhouse-gas emissions over the past decades.

More of the same is just not an option. But what should come instead, and why is it desirable? An important part of the answer is new technologies like those mentioned above. However, a closer look at some of current crazes also exemplifies the ambiguity of technological breakthroughs. Take vehicle automation and car sharing, for example. Both probably have the potential to revolutionise our transport systems. The OECD’s International Transport Forum modelled the impact of autonomous, shared vehicles that users could hail in the Portuguese capital of Lisbon. They found that, under certain circumstances, the number of cars could be reduced by far more than half compared to today – surely a desirable future.[1]

A choice between heaven and hell?

In a desirable scenario, self-driving cars run on renewable electricity and are available on demand as part of shared fleets that you can subscribe to book rides. Prices are lower if you share journeys with others. As these vehicles are shared and pooled, vehicle use becomes much more efficient. There are hence much fewer vehicles on the road, meaning less road space is needed, and sidewalks and bike lanes can grow. The need for parking spaces diminishes, freeing up (expensive) city space for housing, terraces, playgrounds, and greenery. Congestion and road transport pollution could be mostly eliminated.

On the other hand, the problems of cities today may also be amplified. In this undesirable scenario, self-driving cars remain privately owned and still run on internal combustion engines. Because of the convenience of autonomous cars, vehicle kilometres increase (there is no need to find a parking spot if a car can drive around empty, always available), as do congestion, noise levels, and emissions. There is less space available for other modes of transport, or for people to sit on a terrace, play outside with their kids or do sports.

The ambiguous potential of technologies illustrates the need to make choices and define rules. If steered wisely, technology and innovation can help us advance down the road to truly better transport. But this requires clear rules and a priority for sharing, along with a deep integration of traditional public transport and new mobility services for people and goods such as the sharing of cars, rides, delivery capacity, and (cargo) bikes.

These decisions will not be easy. The months-long protests of the gilet jaunes, which sparked in France late 2018, or the failure to tackle the toxic legacy of the Dieselgate scandal on our roads show the social and industrial policy challenges that we will have to face.[2] For decades, European governments have encouraged and subsidised unsustainable mobility patterns and industries, making it now very difficult to gradually turn towards future-proof choices. Entire industries which are amongst the largest and most influential in Europe will have to change. The car of the future may not look entirely different from the outside, but will have to be powered, managed, and used differently.

Even if the emerging technological changes are particularly profound, the key challenge will be the transition to a new mindset. So far, our thinking and policies are mainly geared towards an increase of transport flows and care too little about an increase in mobility. The mobility of the future – and in many cases even of the present – is much less about moving heavy vehicles or a container from Madrid to Helsinki and much more about considering whether every movement is really needed.

Our smartphone or laptop already saves us a lot of going back and forth when we can work or study from home instead of spending two hours commuting by car or train. And what if 3D printers can replace a lot of today’s logistics, or if your local supermarket turns into a service centre for delivery, repair, and specialist advice within walking distance? Then transport could be replaced by mobility – the possibility to satisfy our needs and desires without necessarily changing our location. 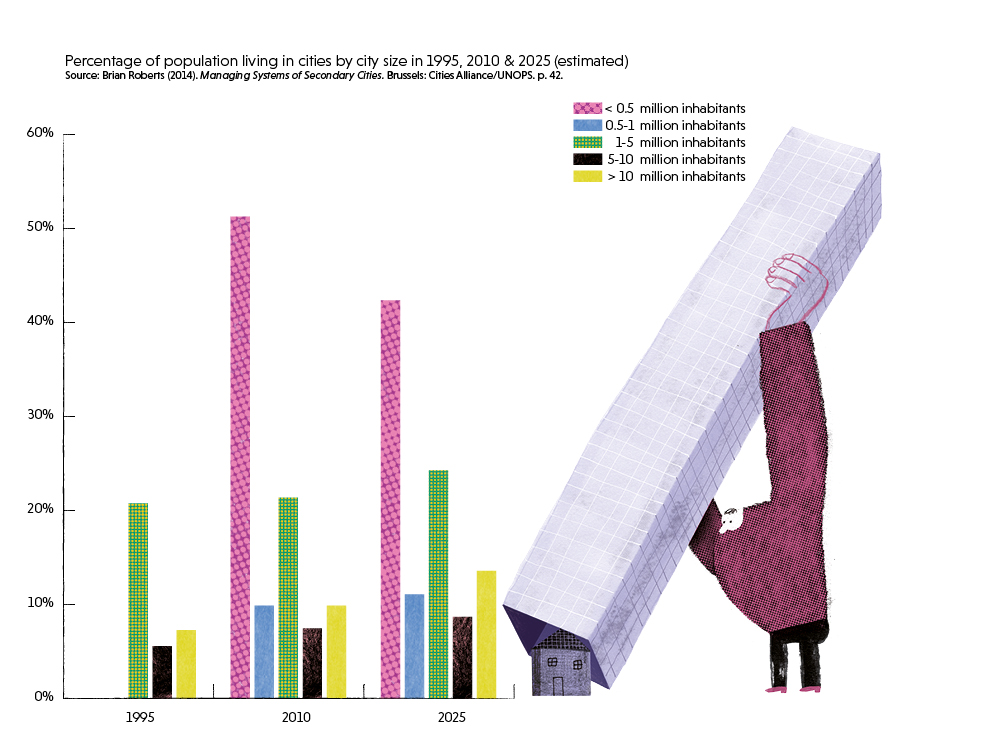 In almost every European city, people are already experimenting with these changes. Our cities have in many regards always been the creative laboratories and forerunners of the emerging mobility revolutions. So much sometimes that they do not even notice any more how revolutionary they are. Many Dutch citizens, for instance, believe that the Netherlands have always been a paradise for cyclists and active mobility, with safe public spaces and a high quality of life, and where not only the prime minister but also young children cycle every day.

In reality, the country was just as car-centred as most industrialised countries until the 1970s. Then, a true revolution started: people no longer accepted that more and more children would die on the roads and took to the streets. The ensuing social movement radically transformed the way people move and the way the cities, streets, and squares are designed. What started with a few bike lanes became a whole network across cities, providing a lot of space for humans rather than cars.

Today, Dutch cities can feel like a window to the future of cities in general. And cities in many other countries have long since started their own experiments, from Copenhagen’s cycling paradise to France’s revival of city centres built around new tramways and pedestrian zones.

All these models embrace new technologies, from shared e-bike systems in Copenhagen to the trolley-wire-free tram lines in the centre of Bordeaux – but they do not stop there. We should adopt a similar approach for the European mobility strategy, which is still to be written to a large extent. The rules for electrification, autonomous vehicles, and sharing services cannot be defined for only one city or region. We must enshrine principles, interfaces, and rules in laws that apply from Stockholm to Bratislava, starting not with technologies but with the desired outcome.

A person booking a trip from Sofia to Rome in 2049 should be able to use one service across all national borders and transport modes, with strong incentives to share vehicles on the way and opt for a route with a minimum environmental footprint. And why not remind them of alternatives to going to Rome in person, like a 3D virtual meeting?

When ordering goods in 2049, an algorithm should be able to compare different options, ranging from alternative products and local 3D printing that recycles material, to zero-emission delivery from other parts of the world.

Most probably, the future will not look exactly like this. Just as trains are now running at more than 350 kilometres per hour and cars are still around – despite Wilhelm II’s prediction – today’s ideas about the future will doubtless fail to foresee some very important elements. Our thoughts will make future generations smile. But only if we dare to dream and create is there any chance we will at least move in the direction we hope for. It is time to rewrite Europe’s mobility.

The views expressed are the authors’ own and do not necessarily reflect those of the organisations with which they are affiliated.

Philipp Cerny asks whether free public transport can transform how Europeans get around.

Elon Musk and other super-rich “visionaries” are seeking to revolutionise transport – but ordinary people are getting left behind.