The liberalisation of international trade has increased competition between countries with different levels of social protection. In response to sustained criticism, the EU now includes clauses ensuring the protection of workers in its free trade agreements. As Jean-Claude Juncker hands over the reins of the European Commission to a new team, Thibaud Bodson asks what the verdict is on these clauses. Seen as a glass half full, they strengthen protection for a handful of fundamental labour standards and encourage countries to work together. As a glass half empty, they neglect swathes of employment law and lack binding enforcement mechanisms. The new Commission needs to take this mixed record into account when devising its strategy for international trade and the protection of workers.

The number of free trade agreements (FTAs) signed by the EU has grown significantly over the past 20 years. 11 of these agreements were already in force before 2000; 12 followed between 2000 and 2010; and 24 were agreed between 2010 and 30 June 2019. Today, the EU has deepened its trade relations with over 80 countries through these agreements. While classical economic theory suggests that free trade, economic growth, and the redistributive capacity of states are linked, FTAs are often accused of triggering a race to the bottom that can harm certain workers.

A new, “fair” approach to trade was an important aim for Juncker’s outgoing European Commission. Its 2015 “Trade for All” strategy stated the EU’s intention to use trade agreements to promote “sustainable development, human rights, and fair and ethical trade.” The Brussels soundbite “a values-based trade policy” sums up these objectives. EU trade deals now include expanded Trade and Sustainable Development (TSD) chapters that are designed to fulfil these commitments. The new EU-Japan Economic Partnership Agreement (EPA), in force since February 2019 and considered the most ambitious EU trade agreement to date, has a TSD chapter that includes obligations on workers’ protections enforced by a dispute settlement mechanism.

The EU-Japan trade agreement binds the parties on labour protection, principally through the articles 16.2 and 16.3. The agreement first recognises the countries’ respective sovereignty over workers’ protection policy, stating that each state can establish its “own levels of labour protection” and “adopt or modify” accordingly the relevant legal framework. The TSD chapter then sets out a series of obligations binding the parties. However, these obligations vary depending on the type of action imposed on the parties; their scope of application; and the level of precision in their wording.

Certain obligations are upheld with strong normative force, whereas in other cases the provisions are only moderate or even weak. In other words, some obligations are more demanding than others. For example, the obligation in article 16.3§3 of the EU-Japan EPA, according to which each party shall make “continued and sustained efforts on its own initiative” to ratify fundamental International Labour Organization (ILO) conventions leaves significant room for discretion. It is far less demanding than the article 16.3§5 which states that each party reaffirms their commitments to “effectively implement” ILO Conventions that have been ratified by Japan and the Member States of the European Union respectively. This provision precisely defines an outcome and does not limit the scope of its application. 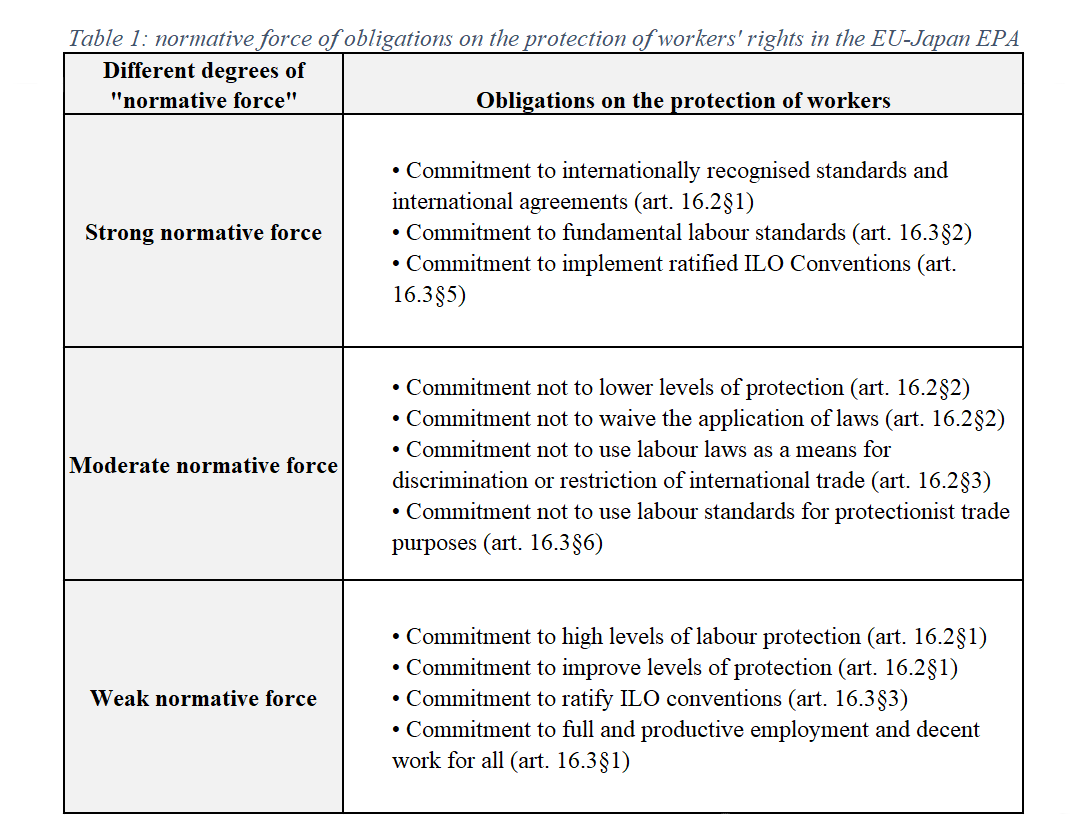 Obligations contained in TSD chapters are underpinned by a dispute settlement mechanism to be referred to in the event of disagreement on the obligations’ implementation or interpretation. Articles 16.17 and 16.18 of the EU-Japan EPA govern this procedure and divide it into two phases. The first phase stipulates that the governments must hold consultations to try to resolve the dispute themselves. If the parties cannot reach a mutually satisfactory solution, one of them may request that a panel of experts examine the dispute. Thus the panel of experts assesses the situation and makes recommendations to settle the litigation. The parties then review which measures they can take and their implementation is monitored by a special committee. The dispute settlement mechanism does not provide for sanctions for breaching the obligations in the TSD chapter, but relies on cooperation from the country in breach.

This settlement procedure has only been triggered once to date, in December 2018 for a dispute between the EU and South Korea. In this case, Brussels is concerned that South Korea is not complying with its commitments on fundamental rights, namely freedom of association, and that South Korea has also failed to make appropriate efforts towards ratifying four fundamental ILO conventions despite its commitment to do so. The case is still pending and its resolution will reveal much about how effective TSD chapters are at protecting workers’ rights.

A mixed regime for workers’ protection

Analysing the obligations in trade agreements TSD chapters reveals both strengths and weaknesses from the perspective of workers’ protection.

First, the EU places significant emphasis on compliance with “internationally recognised standards and international agreements”, which are protected by obligations with strong normative force. “Internationally recognised standards” mainly refer to the four fundamental labour standards, namely: (1) freedom of association and the right to collective bargaining; (2) the elimination of forced labour; (3) the abolition of child labour; and (4) the elimination of employment discrimination. In turn, “international agreements” largely stands for ILO conventions. As far as conventions are concerned, it remains up to ILO member states to decide whether or not they wish to ratify them. Indeed, only a limited number of conventions have been implemented. Of the 189 conventions recognised by the ILO, 52 are in force in the United Kingdom, 32 in Japan, 23 in Canada, 20 in China, and 12 in the United States.

Second, strengthened protection of “internationally recognised standards and international agreements” implies that workers’ rights that fall outside this core group of standards have weaker protection under EU FTAs. For example, rights regarding fixed-term employment contracts, redundancy and layoffs, retirement, and maternity leave are all therefore protected by less demanding obligations. In this context, TSD chapters can be said to consolidate a limited number of standards, but the regime that they guarantee clearly offers less robust protection for the rest of workers’ rights, leaving the door open to a race to the bottom and greater insecurity for workers.

The trade deal regime for the protection of workers is therefore mixed. The model established by Brussels does emphasise a core group of fundamental standards and encourage countries to work together to resolve disputes. Nevertheless, TSD chapters leave whole swathes of labour law to the whims of contracting parties and relies on a dispute settlement mechanism that will not sanction them if they do not meet their obligations.

The limits of EU action

Whatever the verdict on EU trade agreements, any evaluation of to what extent they protect workers must account for the division of competences between the EU and its members states. While the EU can act alone on matters falling under its exclusive competences, for matters covered by shared competences it must operate in concert with member states. Trade deal clauses on the protection of workers are particular in this regard. The Treaty of Lisbon provides that common commercial policy is an exclusive EU competence, but that social policy, for the aspects defined in the treaty, is a shared competence. So while the EU can in principle conclude FTAs alone, clauses on the protection of workers should in theory be subject to a co-adoption procedure by the EU and its member states.

The division of competences in the European treaties determines Brussels’ ability to protect workers’ rights.

This conflict of competences was resolved by the European Court of Justice in May 2017. The Court of Justice ruled that the EU has limited room for manoeuvre when negotiating TSD chapters if it wishes to remain within the limits of its exclusive competences. The court found that the EU’s exclusive competence on trade cannot be exercised to “regulate the levels of social protection.” Against this backdrop, it can be argued that obligations reaffirming “internationally recognised standards and international agreements” do not constitute the regulation of levels of social protection, and therefore do fall under the exclusive EU competence. However, measures such as dispute settlement sanctions or adding to the list of rights that enjoy reinforced protection under TSD chapters could be seen to regulate levels of social protection. As such, these measures would fall under shared competences and require the support of EU member states.

The division of competences in the European treaties therefore determines Brussels’ ability to protect workers’ rights. If it acts alone, the EU is limited in the protections it can guarantee through its trade agreements. If, on the other hand, it wanted to negotiate more robust mechanisms to protect workers, member states would have to adopt them as well. Such adoption is far from certain however. Which is why, to prevent agreements negotiated from being rejected by one of the 28 capitals, Brussels might prefer to seek ways to act alone.

Thus, the question of protecting workers in FTAs must be put in the context of the division of competences between the EU and its member states. Progress could however be made by referring to an existing but underused mechanism: regulatory cooperation. Regulatory cooperation has indeed been included in recent agreements. A case in point is Chapter 18 on “Good regulatory practices and regulatory cooperation” of the EU-Japan agreement. Its procedures have several notable features. First, the chapter envisages general regulatory cooperation and that it should take place through a special yearly committee. As such, the measure is not specific to the protection of workers’ rights and can cover other areas such as cybersecurity, animal welfare or consumer rights. Second, regulatory cooperation is voluntary and the contracting parties reserve their full right to regulate. A party could well decide not to participate in this cooperation procedure and, even if it were to, it would remain free to adopt, or not adopt, regulations as it saw fit. Third, the procedure also establishes consultation channels with civil society. This provision widens dialogue to include non-governmental stakeholders and promotes transparency. Finally, the cooperation mechanism provides for prior notice on planned major reforms and allows a party to express its concerns, making it possible for parties to discuss and potentially contest a draft of regulation before it is adopted.

If properly used, regulatory cooperation would both strengthen the protection of all rights for workers and make it possible to identify trends towards a race to the bottom on social standards.

At a time when the new European Commission is being installed and the EU’s trade strategy needs redefining, the provisions on workers’ protections signed by Brussels are a mixed bag. Hopefully the new team can continue to strengthen this regime, particularly by using regulatory cooperation mechanisms. It is as much about good labour relations as it is about well-managed competition between markets. Because when the glass is empty, the workforce complains. And when the glass is full, market forces and competitive pressures slowly empty it.

Trapped in a Populist Imagination: Slovenia under Janša Politics
By Alem Maksuti

Prime Minister Janez Janša is locked in a war with imagined enemies, fuelled by conspiracies and a distorted view of history.

In a volatile world, the EU needs to restore its damaged credibility on foreign relations and find ways to assert its power.

Cultural professionals are vital to Europe’s recovery. It is time member states and EU action reflect this by addressing working conditions in the sector.

Why Is It So Difficult to Regulate Toxic Contamination?
Shachi Mokashi
Why We Need a Decolonial Ecology
Aurore Chaillou, Louise Roblin, Malcom Ferdinand
The Return of Industrial Policy in the European Union
Ferdi De Ville
Greek Watergate: Behind the Predator Spyware Scandal
Alessio Giussani