Geert Wilders formed his party in 2004 when he split from the centre-right Liberal Party. In 2006 his party won seats in parliament for the first time. With his new party, Wilders took over the political niche of the charismatic maverick Pim Fortuyn. In 2002, Fortuyn had fragmented the Dutch political landscape with a campaign focused on immigration, Islam, civic integration, and national identity. Until 2002, Dutch political parties had mostly focused on economic questions. The most important parties, from economic right to economic left, had been the conservative liberal Liberal Party (VVD), the centrist Christian-Democratic Appeal (CDA), the Social-liberals (D66), the social-democratic Labour Party (PvdA), and two smaller left-wing parties, GroenLinks (GreenLeft) and the Socialist Party (SP). Political debates were focused on the balance between public investments and fiscal responsibility, between unemployment and income redistribution, and between economic growth and environmental protection. Fortuyn instead spoke about the growing number of Islamic immigrants and their effect on the societal acceptance of homosexuality and women’s rights. Because Fortuyn was shot days before the 2002 election, a number of politicians have sought to become the new Fortuyn. Wilders proved successful in occupying this niche.

Heir to a social-democratic tradition

Cultural themes are most dominant for the PVV. Unlike the traditional radical right but much like Pim Fortuyn, Wilders has ‘modern’ positions where it comes to the rights of women, lesbians, gays, and bisexuals. The PVV does not propose to extend these rights but claims to protect the rights of ‘our women’ against an external threat: Islam. It sees Islam not as a religion, but as an ideology bent on domination. While this claim is all but realistic, the views of first- and second-generation immigrants from Turkey and Morocco on issues of gender and sexual morality do tend to be more conservative. From this perspective, the PVV is a kind of fundamentalist liberal party that seeks to defend the values of the sixties in terms of freedom for women and homosexuals. On this basis, it advocates closing the Dutch borders to (Muslim) immigrants and restricting religious freedoms for Muslims.

A second key issue for the PVV is sovereignty of Dutch citizens. Here, it does propose reforms. It has become a vocal advocate of direct democracy, particularly in the forms of referenda, something progressive left-wing parties have been also calling for for years. The external threat to Dutch sovereignty, according to PVV, presents is the European Union. It campaigned for voting against the European Constitutional Treaty in the 2005 referendum. Despite a majority voting against the treaty, it was still implemented with only superficial changes. The PVV sees a great problem in the discrepancy between the decision of the Dutch people and the inability to effectuate such a decision in the European Union; a democratic deficit that is also problematic from the perspective of progressive left-wing politics.

Since 2010, PVV has been developing a distinct economic discourse. During his time as Liberal Party MP, Wilders was the strident advocate of tax cuts. Whilst PVV does advocate cutting taxes, it has also layered its social-economic message with new proposals. During the last decade’s economic crisis, most established parties have advocated budget cuts and welfare state reforms, such as raising the retirement age, liberalising the labour market, and introducing more out-of-pocket spending in healthcare. PVV, which used to be the most right-wing party in the Dutch parliament, strongly opposed these reforms, with their only ally being the Socialist Party. This has upset the Dutch political landscape.  Economic issues are debated as much along a pro-reform/anti-reform faultline (with the Socialist Party and the Freedom Party versus the mainstream parties) as along a left-right dimension. PVV does not support many proposals to extend welfare state protection, seeking instead to protect the interest of the ‘insiders’ of the welfare state – older, white men – by preserving the Dutch welfare state in its current form. Here, again, they also see an external threat. The Dutch welfare state in their eyes cannot be combined with being an immigration country, as immigrants can easily move to the Netherlands and exploit its social services.

Between 2010 and 2012, the Freedom Party supported the centre-right minority cabinet. After 2012, the party went into opposition facing a Liberal-Labour coalition. In that period, the Freedom Party’s ideological development has only one distinct direction: radicalisation. In order to monopolise media attention, the Freedom Party has taken increasingly extreme positions

The most extreme of these are in the cultural domain. When seriously questioned before 2014, Wilders had distinguished between Muslims and Islam; his problem was not with individual Muslims but with the Islam as an ideology. Between 2010 and 2011 Wilders had been criminally prosecuted, and cleared, for a number of statements where he had compared Islam with fascism. He was cleared of charges of discrimination. During the 2014 municipal election campaign, where the Freedom Party only campaigned in The Hague and Rotterdam, Wilders had moved his target from Islam to Moroccans. On the evening of election day he stood in front of a small number of supports and let them chant that they wanted “less, less” Moroccans in the Hague. A new criminal case was started and in the fall of 2016 the court found Wilders guilty of discrimination but declined to sanction him. Wilders has made a qualitative shift from focusing on the ‘religion as an ideology’ to portraying an ethnic group as a threat. This places them closer to the mainstream of the radical right.

When it comes to EU integration, the Freedom Party had made a similar radical step before. Until 2010 the Freedom Party has been Euroskeptical, advocating for the European Union to be reduced to the European Economic Community. Since 2012, however, it has advocated leaving the European Union altogether, demanding instead a relationship like Switzerland or Norway has with the EU. The curious 2016 referendum campaign on the EU-Ukraine association agreement provided another platform for the PVV to voice its opposition to the EU. The inability of the government to effectuate the ‘no’ vote has clear parallels to the 2005 referendum on the European Constitution Treaty.

Where the PVV was able to beat the other heirs of Fortuyn in 2006 by taking the most extreme positions on Islam, its positions on European integration and its anti-Moroccan statements have been less successful. In the 2014 European election, just after focusing on these issues, it lost votes. The anti-Moroccan statements also caused a number of MPs and MEPs to leave the party. These were already dissatisfied with the PVV’s socio-economic course and went on to found the anti-tax anti-immigration party For the Netherlands (VNL).

The Freedom Party has combined this radicalisation with a new media strategy. In the 2017 election campaign it has shunned traditional media. Whereas other politicians cannot stay away from discussion programmes, the Freedom Party has only appeared in one during the current election campaign, and demanded there would be no other guests. It has also backed out of most televised. Whereas 2010 and 2012 elections saw the party write extensive election manifestos, no more than a single page has been published for the 2017 election campaign. In contrast to 2010 and 2012, when the PVV – like all other parties – asked the independent Dutch Bureau of Economic Policy Analysis to model the macro-economic effects of its manifesto (such as expected effects on unemployment and economic growth), this year it has backed out.  Instead, the party now prefers to communicate via Twitter, with Geert Wilders using the platform to make more and more extreme statements. The traditional media can do little else but read out his tweets on television and ask other politicians and commentators for their response to his extreme tweets.

The success of this strategy remains to be seen. In the Peilingwijzer, the poll of polls, the Freedom Party is leading, alongside  the Liberal Party. During the European refugee crisis in 2015 and even in the autumn of 2016 when Wilders was prosecuted criminally, the Freedom Party was the topping party in the polls.

On the one hand, the media is currently overflowing with the campaign of other parties. The governing Liberal Party has moved sharply to the right, in particular on cultural issues, with prime minister Rutte saying to pro-Erdogan Dutch-Turkish protestors that they should ‘get out’. Moreover, the 2016 Ukraine-EU referendum has led to the mushrooming of Eurosceptic, populist right-wing parties: in addition to the aforementioned For the Netherlands, which has taken one of the spokespersons of the ‘no’camp as its leader, the two other leaders of the ‘no’-camp have founded their own anti-elite, populist parties. This may undercut Wilders’ electoral success.

At the same time, in the final weeks of the current campaign, the PVV and the Liberal Party hope to cast the voting decision as a presidential race between their leaders. The Liberal Party hopes to draw centrist voters by forming the main barrier against the PVV becoming the largest party, whilst the latter hopes to mobilise voters dissatisfied with the current government.

So, is the Freedom Party a prime example of an unprecedented rise of radical right-wing populism in the Western world? First, its current polling success is exceptional. The Peilingwijzer has the Freedom Party on 17% of the vote. This the exact same share of the vote Pim Fortuyn won in 2002 and it is just a few percentage points above the Freedom Party’s share of the vote in 2010. The only difference now is that it is neck to neck with the largest party. This is mainly due to the fractionalisation of the Dutch political landscape. If it were to become the largest party with 17% of the vote, it would be the smallest largest party in the Netherlands’ history. The Freedom Party is unlikely to enter government, as all parties but the Liberal Party and a pensioners’ party have announced that they would not cooperate with it, and given the fractionalisation, a coalition would need at least four parties to get a majority. So, yes, the party is polling well, but there is nothing exceptional about the party’s current performance.

As observed above, the party is also more progressive on issues of women and LBGT rights. During the European economic crisis, these parties have become more similar in terms of their positions on European integration (the Front National now also advocates leaving the European Union) and have become more vocal defenders of the welfare state; especially the Front National and the Austrian Freedom Party.

The similarity between the Freedom Party and Geert Wilders with Donald Trump is quite clear. Wilders has embraced the Trump phenomenon. He attended the 2016 Republican Convention and spoke at an event for LBGT Trump supporters there. In the current campaign, he has used Trump’s victory as an example of what could also happen in the Netherlands. There are also clear strategic and policy similarities. For instance, both politicians shun traditional media and prefer to use Twitter to send out their message. Both Wilders and Trump seek to defend ‘our women’ against the threat posed by immigrants and have turned against Islamic immigration in particular.

The Dutch Demise of Social Democracy: A Green Opportunity? Politics
By Tom Vasseur

A striking yet underreported feature of the recent Dutch elections was the downfall of the labour party. What led to this? What does it mean for Greens?

Green for the People Politics
By Tijs Sikma

How do we define populism? How did it influnce the Dutch elections, and what can Green parties learn from it? 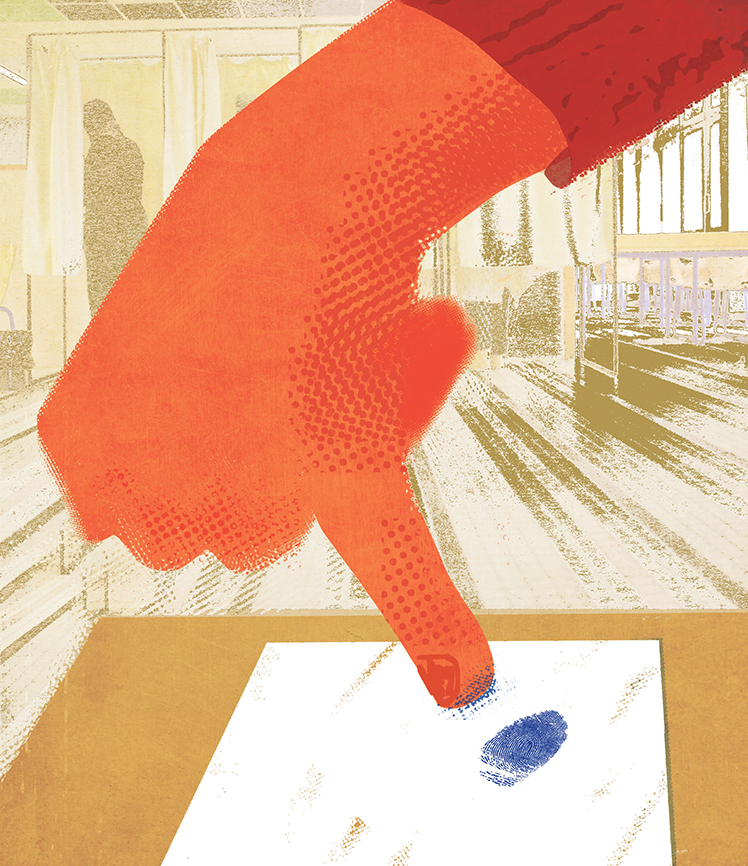