One of the primary conclusions of the past five years is that the days of “easy politics” are gone, we have moved to an era of “hard politics.” The shift of society to a more sustainable paradigm has run into greater resistance than the Greens anticipated. The great wave of environmental consciousness that began in 2007 quickly gave way to strong conservative pushback. This is not just because of the economic crisis, which actually only served to boost the already existing counterattack launched by a system that feels its vested interests are directly at risk.

Producers of fossil fuel generated energy are loath to give up the €500 billion in gas, oil and coal that is imported each year to the E.U. The banks would rather pass off the cost of their irresponsible behaviour to the taxpayers. Agro-industrial lobbies would prefer to maintain a system that wreaks havoc on the environment, harms famers and damages the health of consumers. Proponents of neo-liberalism and productivism continue to believe that competition by all and with all and growth spurred by consumption of goods, irrespective of what they are, are intrinsically good.

The Greens have shown that they are capable of forging alliances with those in the current system that are willing to work towards sustainable development. From financial regulation to fighting overfishing, from promoting renewables to fighting for digital rights, they have pragmatically moved forward a number of important files through alliances with parties with which they do not always agree.

But, they also know how to fight those who resist change. Sometimes that means starting by simply naming them! In this age of global communications, it is important to clearly establish who one’s opponents are and then state it publicly. This is all the more important since the Greens can count on the increasing support of the citizens, who have already begun to change their habits. These alliances between politicians and grassroots movements are of paramount importance to the success of the Greens, because although entering in the majority culturally speaking, they remain firmly in the minority in the political sphere. These alliances are crucial in Europe as it is the only arena where it is actually possible to have an effect on global changes.

A Green battle in Europe

The Green battle is being waged in Europe. As understandable as the desire to reject European decision makers is, it would be entirely counterproductive to support political parties that advocate for receding back to within national borders. Supporting sovereignists and nationalists on the left or the right will only play to the favour of the conservatives who have already clearly stated that they do not intend to change their currently policies, something their campaign manifestos confirm. The fight against today’s major challenges – climate change, declining bio-diversity, and financial deregulation – can only be done globally, through a united and willing EU. Europe must re-establish itself as a leader in the fight against climate change, a position that it sadly lost in 2009 in Copenhagen. Similarly, only the European Union is capable of enacting legislation to regulate finance to protect against future crisis, the brunt of which the least advantaged always bear.

A Green battle for Europe

This battle for global justice will not be possible if we do not first re-establish justice within Europe. This will require building bridges over the trenches that have been dug between Europeans. This can be done through a better handling of the crisis. Europe will not be taken seriously in its defence of solidarity globally if it is not able to uphold it within its own borders.

There will be no economic governance of the Eurozone without social governance and a meaningful transfer union. Those who would have us believe otherwise will bear a major historical burden.

Moreover, we must keep all of the pieces of the European puzzle together! The debate surrounding the need to tighten integration within the Eurozone means that we must give a clear indication to those who are not yet a member as to what it will require to become one.  Citizens of Ukraine know well what the E.U. means in terms of democracy and by extension of shared prosperity, whatever the definition.

This edition of the Green European Journal aims to show – without overestimating or underestimating – what a small group of Green MEPs can accomplish. Their courage and determination are anchored in a vision of shared progress for all Europeans. If the crisis has taught us one thing it is that progress is slow and comes through trial and error, and that we have an obligation to learn as much from our failures and as from our triumphs. In honour of the 100th anniversary of WWI (1914-1918), we contemplate our history to better understand current policy. In order to ensure a fruitful debate on what our priorities should be for reform, or for where to best take action, we must, as Etienne Balibar advocates, understand the historical moment in which Europe finds itself. As arduous and theoretical as this may seem, we have an obligation. Failing to do so would mean failing to be effective in our political endeavours, and in our ability to offer a firmly forward looking vision. 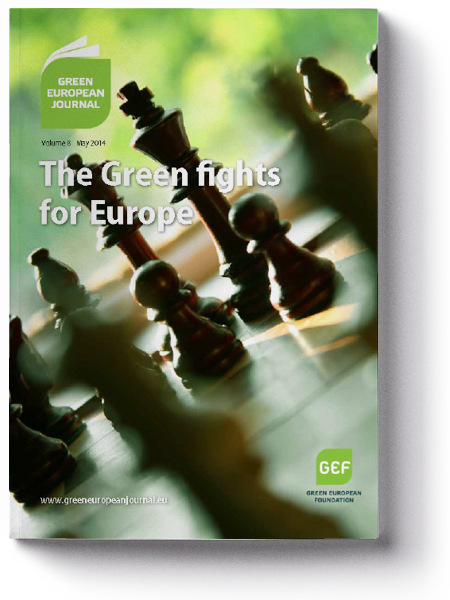 What has the Green movement been able to achieve and what will be the next key challenges for Europe and for the Greens?

Given the current political climate, it behoves ecologists to thrust imagination, innovation and experimentation to the forefront of political action and thought. This requires a “benevolent distance” between the Green foundations and the Green parties.

ENFR
ENFR
For an Ecological Democracy Democracy
By Dominique Bourg