As we think about building societies that can be ready for pandemics and resilient to shocks, basic income needs to be part of the picture. The insecurity and hardship caused by the economic fallout of the COVID-19 crisis have prompted calls for an emergency basic income. The proposal could prove vital for people in many different situations: out of work, on reduced hours, or at-risk working in unsafe conditions. While it is unlikely to join the support announced by governments in the immediate future, the argument for a permanent, universal basic income grows stronger.

Winston Churchill is often credited for insisting that one should never let a good crisis go to waste. While the COVID-19 pandemic understandably forces our attention on the immediate here-and-now, it is opportune to also reflect on how our current predicament will affect our social relations and structures going forward. Areas of life that long seemed untouchable are suddenly open to questioning as the weaknesses and inequalities in the current systems are thrust to the forefront. In particular, insecurity contributes to the pressures many people are facing, undermining attempts to slow the spread of the disease due to the financial necessity of staying at work.

At the start of May, 88 countries around the world have announced 130 cash transfer programmes as part of the pandemic response, representing almost a doubling of pre-COVID levels. Most of the schemes are temporary, with the average duration being 3 months. Around a quarter of the programmes offer only a one-off transfer. Predictably, these programmes are heavily targeted at existing workers and affluence-tested and important coverage gaps remain. One immediate effect of the social and economic fallout of the global pandemic response is a sudden boost in civic, media and political support for what is most commonly called an emergency basic income (EBI). Whether calls from the First Minister of Scotland for the UK to devolve fiscal powers for the country to deliver the policy, pan-European petitions for the idea, or even the media excitement for the Spanish government’s minimum income proposal (not quite a basic income), it is clear that the idea has moved to the centre of policy debate across Europe.

The idea is simple enough. At a time when a significant portion of the workforce is forced to stay at home and individuals and families, as well as small businesses, are suffering economic hardship, government assistance should directly address the most urgent problem – loss of income. EBI is such an instrument: it offers immediate cash assistance (no delays or lags due to eligibility checks), it targets those most vulnerable to the economic crisis (even a universal payment has the greatest impact on the most disadvantaged), and it boosts pandemic solidarity by offering a burden-sharing mechanism that compensates those who have lost work or business opportunities and those essential workers who are continuing to service us all at considerable personal risk. A critical advantage of the proposal is that it would cover not merely those working in standard employment but also offer urgent income support to the self-employed, the precariously employed, and those with care responsibilities – paradoxically in many cases now deemed “essential workers”.

There is a need to think about the policy responses that promote social and economic resilience and pandemic preparedness.

The EBI proposal has several drawbacks, however. The first is that it is essentially a temporary measure, meant to cover the period of severe economic fallout provoked by the lockdown measures. The assumption is that EBI would be a short-term response in the order of several months. But there remains serious uncertainty as to how long the economic fallout will last; economists predict COVID-19 will lead us into the most severe economic crisis since the 1930s and so the impact, especially on the most vulnerable and disadvantaged members of our society, may extend years beyond the time frame initially envisaged. This uncertainty undermines the boost to security that an EBI should bring – the temptation for governments to limit support to short-term measures reduces the belief that long-term support will be in place when most needed. In addition, as the economy settles back into whatever the “new normal” will be, the lingering effects will be felt very differently by different individuals and groups. Some may find their lives restored to something resembling their previous quality, but many will face continued hardship and face a cliff edge as soon as the support dries up.

A second drawback is that current calls for an EBI face both practical and political hurdles at a time when immediate remedies are required as a matter of urgency. The political hurdles are obvious and familiar to anyone who has advocated for basic income in pre-pandemic times. Even at a time when workers are effectively forced to reduce hours or give up their jobs, the politicians’ knee-jerk response to unconditional support is to baulk at giving out “money for nothing” and instead insist on relying on existing programmes, irrespective of how fit for purpose they are in current crisis conditions. Practical hurdles that impede the immediate implementation of an EBI exist as well. In many countries, ensuring every individual ends up on a register entitling them to this support is easier said than done, especially in a situation when bureaucratic capability is under severe stress. The same applies to the delivery mechanism of the EBI keeping in mind the surprisingly large number of individuals without bank accounts or fixed abode. These are practical hurdles that can be overcome given time, but time is precisely what is at a premium in the midst of the COVID-19 pandemic.

In short, EBI is a good idea and a potentially vital tool in a comprehensive pandemic policy response, but introducing it now is not likely to happen in many jurisdictions. But let us think ahead for a moment. COVID-19 took the world by surprise, despite public health officials, epidemiologists, and many others warning us for many years about the possibility of a pandemic scenario and its disastrous social and economic consequences. In large part because of our continued destructive relationship with the environment and our highly connected societal organisation, the same professionals predict that COVID-19 is but the first – and in fact not even the first, think about SARS and MERS – in a long line of viral epidemics. This means we need to think ahead in terms of preparedness and acknowledge that the new normal may be a world in which the sort of economic shock we experience today is likely to come about again – possibly sooner than expected, and possibly in the form of an even more deadly and destructive disease. There is a need, therefore, to think about the policy responses that promote social and economic resilience and pandemic preparedness. Resilience is about ensuring that society maintains the capability to adequately respond to the sudden shock of a viral pandemic. Resilient policies will ensure that urgent human needs continue to be met during the pandemic crisis in a manner that reflects key social values – compassion, fairness, solidarity.

Basic income as a tool for resilience and readiness

Basic income would play an important role in terms of promoting social and economic resilience as part of pandemic preparedness policy. We can think of basic income and pandemic preparedness in two ways. One way in which society can become more resilient is by getting itself ready to implement an EBI as soon as the situation mandates it. This means having the required political debates now rather than in the midst of the next crisis. The current crisis experience means politicians and other key stakeholders are very much alive to the need for a robust economic support programme. The merits of EBI in this context can be debated in advance and legislation allowing for triggering its introduction in a pandemic context can be voted upon. Similarly, the practical aspects of readying society for the urgent introduction of EBI when needed can be addressed well in advance, with appropriate decision-making on how to deliver the measure in a time of reduced workforce capacity.

There is a stronger strategy to consider, however. The best way to prepare society for the pandemic is to institute a proper, permanent basic income: a small monthly cash grant paid to all individuals with no strings attached. Having an actual basic income already in place obviates the need for political debate or finding solutions to implementation concerns in the midst of a crisis. It may be that we start off with a low basic income grant that needs “dialling up” to a much higher level in the midst of the pandemic crisis, but that would merely require a political decision on financing while the instrument itself is readily available. We find a real-world example of this strategy in Brazil. At the start of 2020, the municipality of Maricá near Rio de Janeiro had already instituted a low basic income that paid a monthly 130 reais (roughly 21 euros) to around 42 000 residents – not quite universal but with 25 per cent of the population covered and plans to expand over time a close approximation of the basic income ideal. As soon as COVID-19 hit Maricá built on the existing basic income scheme and is now paying the same individuals 300 reais (almost 50 euros) as part of the pandemic emergency response. The Maricá experience offers a prime example of how we can implement a rapid real-time response to an emergency by ratcheting up a pre-existing scheme.

Increased trust and solidarity would also be a critical feature for building resilience into political systems that currently are under thread of populism, polarisation, and partisanship.

Having a basic income in place boosts resilience in many other ways. The effects of economic security on public health are already well documented and are likely to be even greater under the added stress of a pandemic crisis. The existence of, and experience with, a secure income floor will ensure individuals and families enter a possible pandemic crisis – including protracted lockdown restrictions – much better prepared and less worried about their economic security. The expectation of maintaining a secure economic floor will have a critical positive impact on stress and mental health both at the start and during a pandemic crisis. The existence of an economic security floor is also likely to boost social relations by increasing trust and solidarity, which again is a critical feature for dealing with a pandemic on the community level. Increased trust and solidarity would also be a critical feature for building resilience into political systems that currently are under thread of populism, polarisation, and partisanship.

In this time of COVID-19, many governments around the world are implementing short-term cash transfers, albeit mostly heavily targeted to workers and often failing to cover self-employed or precarious workers. These short-term, targeted approaches cannot offer the long-term resilience and security that basic income can and would but they open a unique window of opportunity for making the case for basic income. Governments need to be building the conditions that allow us to not only survive the current crisis but to rebuild societies stronger to thrive in the future. By developing the argument for a permanent basic income now, we create a foundation that will better prepare us for future pandemics.

A look at basic income’s enduring merits through the eyes of one of its ardent advocates, Malcolm Torry.

Building shock-resistant societies calls for a break with capitalist logic to propose solutions that prioritise wellbeing while factoring in ecological limits.

The moment is now to redefine our food systems around principles of sustainability and justice. 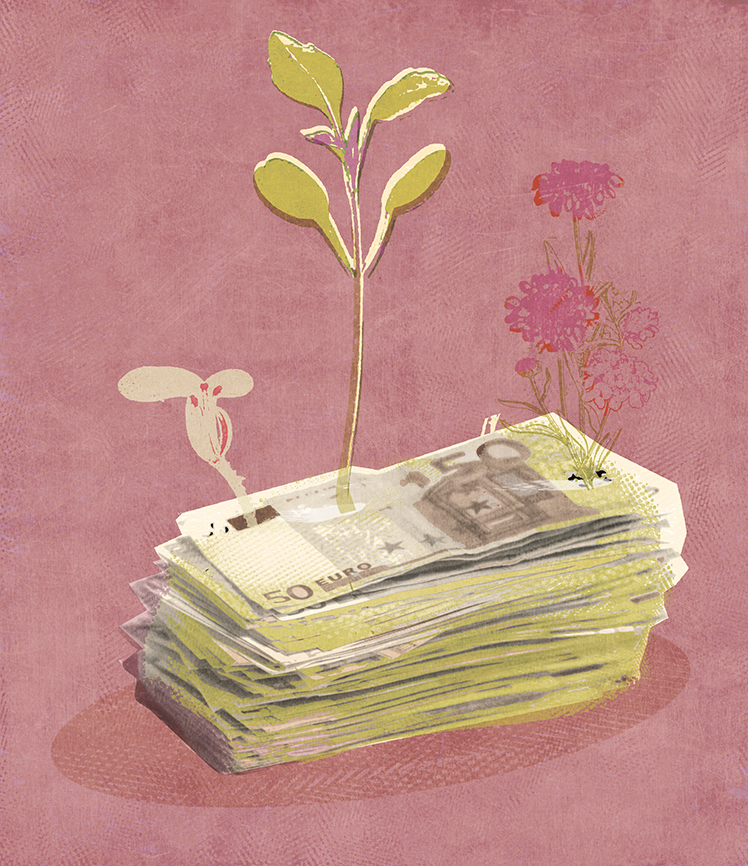