EN
More by Samir Jeraj
How Greens in Government Are Tackling Homelessness Anti-Racist Politics in Practice: Greens and Black Lives Matter The New Urban Crisis: A Manifesto for the Status Quo

Grenfell Tower, a huge block of social housing flats in West London, caught fire on the 14th June 2017, killing almost 80 people. This national tragedy, which has seen Londoners mobilise to help those displaced and bereaved, has also elicited protests and anger across the capital due to the fact that the incident might have been prevented if warning signs hadn’t been ignored.

As you come into Latimer Road station from Ladbroke Grove you can see the looming, burnt out shell of Grenfell Tower. I’ve never seen a building so wrecked. As you get closer, you notice the ground floor is strangely unharmed from the outside, but the children’s play area just outside is covered in burnt out debris.

On Wednesday early morning around 1am, a fire started at Grenfell Tower a 24-floor block of 127 flats in west London. The fire spread rapidly, and engulfed the building. Residents who escaped said they were woken either by Muslims returning home from Ramadan prayers who ran to their aid, or by the screams of neighbours. At present, the death toll stands at 79 and it is likely to rise. Throughout the neighbourhood are hundreds of missing posters taped to every building, shop, and wall. Most of them are people of colour, some old, many young.

The details and background emerging from Grenfell Tower tell the story of the UK’s failed housing policy, and its experience of austerity.

The neoliberalisation of the housing market

Grenfell Tower itself is public housing, constructed in 1974 and owned by the local government – Kensington and Chelsea Council. There has been talk of the council deciding or in practice designating particular blocks of housing for particular communities, in this case the residents of Grenfell Tower were largely people of colour. These policies were certainly in place elsewhere in the UK. In the early 1980s the then Conservative Government privatised a large amount of social housing by giving tenants the ‘Right to Buy’ at a substantial discount. At the same time, they effectively ended the ability of local governments to build public housing, and instead encouraged Housing Associations (charitable and not-for-profit organisations) to replace them. The number of new build public and social housing collapsed along with the financial might and political leadership of local government. Right to buy reduced council-owned housing from 40 per cent of all housing in 1980 to less than 10 per cent today. The impact has been a soaring increase in housing costs for renters and people with a mortgage.

The Labour Governments of 1997 – 2010 did little to redress this problem. They were content to ride the bubble of house-prices as it benefited the conservative middle-class voters they needed to win over. Soon they became fully wedded to neoliberalism, encouraging councils to part-privatise public housing – putting them into housing associations or ALMOs (arms length management organisations). The rationale was that these new organisations could be more ‘customer focused’ on the residents. The reality was a deep hostility to local government and publicly-owned and managed services. These arrangements were tied into any big investment in upgrading or improving housing that had been neglected and starved of funding during the 1980s and much of the 1990s.

All of these neoliberal-inspired policies opened up between the rich and poor, between those who owned property and did not. Working class and people of colour found themselves increasingly marginalised in less secure and more expensive housing, often in the even less regulated private rented housing sector – where you can be evicted without reason. The hundreds of people made homeless from Grenfell will struggle to be rehoused nearby. Austerity has led to a dramatic increase in homelessness, with families being transported across the country away from their communities and support networks. Homeless people will usually only be offered private rented housing due to the shortage of public housing, and become subject to insecure and unhealthy conditions.

This climate of austerity was reintroduced in 2010. Public and social housing budgets were slashed and housing associations encouraged to become more commercial and borrow from banks instead of receiving public funding. At the same time, social security and funding for local government were dramatically cut back. In London alone, 10 fire stations, 27 fire engines and more than 600 firefighters have been lost to cuts since 2010. These undermined emergency responses and efforts to prevent fires by inspecting buildings and taking enforcement action under fire safety regulations. On one of the walls round the corner from the tower is a makeshift memorial with pictures, flowers, and candles – a firefighter’s shirt is attached to the fence with the simple words ‘we tried our best, we’re sorry.’

Government hostility to regulation played a role. Following a smaller fatal 2009 fire in South London, a series of recommendations including installing sprinkler systems and reviewing the ‘stay put’ advice given to residents living in higher floors in the event of a fire. These recommendations were sat on, ignored, and delayed despite efforts from parliamentarians, campaigners, and even the magazine representing housing professionals. The requirement to carry out a Fire Risk Safety Assessment by the Fire Brigade was changed to make it the responsibility of landlords – Kensington and Chelsea Council opted to use the cheapest company available to them. These assessments are not public, unlike in the US, and are now the subject of huge public scrutiny along with the series of decisions that led to Grenfell Tower being ‘re-clad’.

The media has created a general hostility to public housing and to regulation. Years-long campaigns to depict public housing estates as full of undesirables have supported the running-down and privatisation of housing. Channel 4 and the ironically named ‘Love Productions’ screened a reality TV show about a working class community called ‘Benefits Street’ – depicting the neighbourhood as ‘workless’. Similarly, ‘health and safety gone mad’ has become an often used phrase by the media and the political right to denigrate the rules and laws that protect us – often the poorest of us. In this narrative, such rules and regulations are always at fault, to the extent one right-wing newspaper tried to blame EU regulations for the cladding used on the tower. Given the cladding was banned in Germany, this is just misinformation. This hostility to regulation, and particularly to any that has its origins or can be associated with Europe, is part of the UK’s Brexit narrative. Everything from the lack of bendy bananas, to dim light bulbs, to maroon passports, are the fault of EU regulations according to Brexit fans. Moves to strip out the protections and regulations gained in Europe are a key part of the demands from the right.

The management of Grenfell Tower was transferred to an ALMO – a company specifically set up to manage the housing for Kensington and Chelsea Council. The structure is meant to involve residents, but as with many similar arrangements it had become distant and remote. A bureaucratic mechanism rather than a democratic community organisation. Recent upgrades to Grenfell Tower, in particular outside ‘cladding’ of the tower, were controversial among the residents who complained systematically and in numbers about safety concerns. These were ignored. 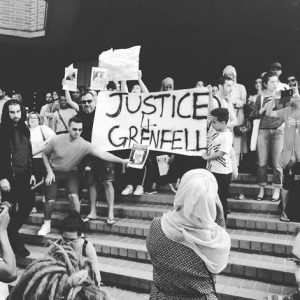 Following the fire, which some are calling the UK’s Katrina (after the 2005 Hurricane and subsequent humanitarian disaster in New Orleans), the response from the local government was poor at best. I was on site a couple of days after the disaster to do some news interviews as someone with expertise on housing and on race equality issues. There was a total absence of local government staff. Volunteers were in charge of the response, people working without sleep (many still observing Ramadan and thus going without food or water during the daytime) to clothe, feed, and support the community. Residents vented their anger and disappointment by picketing the government offices on Friday evening – people held pictures of their dead and missing loved ones up against the windows as the Police barricaded the doors. Several days later a neighbouring local government took over management and coordination of the emergency efforts, an embarrassing admission by Kensington and Chelsea that they had neither the staff nor the trust of the community – despite being one of the wealthiest areas of the UK.

As further details emerge, so will other stories. About the individuals, like the promising artist on the verge of success, the Syrian refugee who thought they had found a place of safety, or the kindly neighbour who took care of kids when they were hungry. Still bigger stories will come out about how and why decisions were made, who made them, and whether personal enrichment played a role. What is clear is that the ideology, of deregulation, of privatising, of austerity, combined to kill people in their homes. Their safety and their lives were not valued by the system, nor were their voices heard until it was too late.

How Greens in Government Are Tackling Homelessness Anti-Racist Politics in Practice: Greens and Black Lives Matter The New Urban Crisis: A Manifesto for the Status Quo

Leilani Farha, global housing expert, explains the housing crisis, how to alleviate it, and why housing should be viewed as a fundamental human right.

The UK faces a housing crisis. It is this crisis, and the growing number of evictions that are mobilising people to campaign on housing. A group of young mothers fights back with direct action.