This fifteenth edition of the Green European Journal goes to press just a few days before the elections in the Netherlands, the first of a series in Europe in 2017, set to be a year ridden with dangers. Throughout the European Union, anger and fear can be felt, and swell the ranks of the extremists and the national populists who feed off them, and are fed by them. Despite unprecedented levels of social welfare and material wealth, in all its forms, security – or rather insecurity – imposes itself onto the political agenda: the physical insecurity of societies afflicted both in spirit and in the flesh by terrorist threat and attacks; cultural insecurity provoked by the crisis of the nation state and the increasing flows of migrants through a continent beset by an existential malaise; the material and economic insecurity experienced by the many workers hard hit by the consequences of global neoliberalism.

As heralds of forward thinking and the precautionary principle, Greens have always battled military, environmental, health, nuclear, and industrial risks – on behalf of citizens, and against states with few scruples on these matters. But, paradoxically, even if they were born of the dialectic between security and change, Greens are ill at ease with today’s demands for security. They claim, and always have, that neither the militarisation of prevention and repression, nor the restriction of freedoms in the name of security, are the answer to today’s challenges. On the question of external security, for example, they stress that spending more to meet NATO criteria, while the 28 Member States together already spend four times more than Russia on defence, doesn’t really guarantee Europe’s security.

But the emotive power underlying the prevailing discourse, the fear and feelings of insecurity, make for a complex political challenge for Greens. The security debate certainly forces them to grapple with difficult, nay existential, questions. But it is not about ‘greening’ defence and policing, or accepting ‘discipline and punishment’ in exchange for ever more fragile guarantees of individual liberties. Today, it is about being a force for change, playing a role in reassuring and helping us break free from an obsession with the ‘risk society’ and the permanent anxiety over how we ‘manage’ a multitude of threats and uncertainties. It’s about setting out a broad, positive vision of security: not naïve but honest. A resolutely concrete vision to respond to the legitimate anger and fear that permeate our societies.

For Greens in Europe, the challenge is to change the terms of the debate, to untether security and protection from its association with inward-looking nationalism and the dangers of a ‘surveillance society’. For security is more than just another ‘political issue’. It cannot be restricted to matters of policing or immigration, nor reduced to the irrational emotions that justify states of emergency, walls and barbed wire, and general control. This debate, monopolised by the politics of fear and its talented orators, rallies around a retrograde project of shaping internal identities and national states of mind; the promise of a future, but a future devoid of prospects. The stakes are high and what we stand to gain is vital: a vision for society with security at its heart, a collective vision that citizens would fight for.

The cross-cutting approach of this edition, while not claiming exhaustive coverage of all topics, underlines the ubiquity of security issues in the Greens’ current and yet-to-come political programmes. From the EU’s place in the world to the risks faced in the Baltic Sea region, from terror-ism to the affirmation of progressive values against national populism, from technology, food, climate, and energy security to home affairs and prevention, from identity politics to the economics of fear and surveillance, from welfare systems to social instability, from the banality of widespread domestic violence to the brutal injustice faced by minorities, the cracks in European societies are laid bare through all the articles in this edition. Greens and progressives have a duty to respond to these waves of fear and danger with a discourse of hope, and policies that can integrate security and protection profoundly and positively.

In a Europe with a changing political landscape, the future of the Union– and incidentally that of the Greens in 2019 – will be largely played out over the question of security. Security and protection are at the heart of the democratic pact between the values of liberty and solidarity. Greens must grasp this subject, for all its emotional charge and communication challenges, with both hands, and proclaim, loud and clear, their progressive pro-European message. A politics of hope to trump the politics of fear. 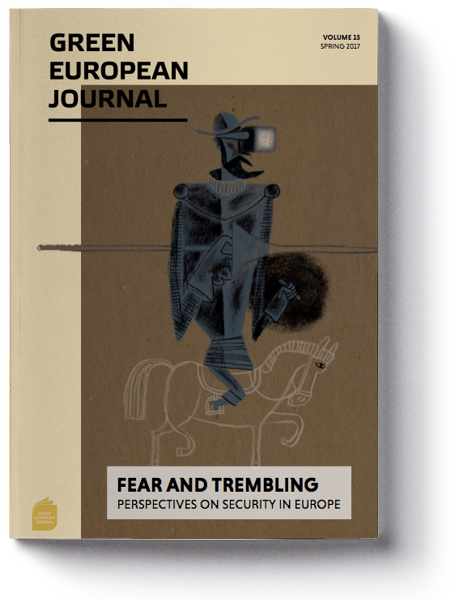 What are the real sources of insecurity in Europe today? This edition takes a look at some of the threats we face and asks whether our perceptions match up with the reality.

Experts & activists from around Europe discuss the security issues in their national context.

EN
EN
Nuclear Energy: Back in the Mix? Climate and Energy
By Luis Nicolas Jachmann

Europe’s most powerful economies are committed to reaching climate targets but diverge sharply about how to get there.

The sense of security in a society is closely bound up with its institutions; the cases of the Nordic countries demonstrate that these feelings of security can be enhanced by fostering inclusive institutions.