Czech Greens in the capital city of Prague must contend with the region’s history and with conservative and pro-business forces when dealing with the core urban issues of housing and construction, as well as mobility. How can Greens then develop a positive and sustainable vision of the city that also resonates beyond its boundaries?

Prague is one of the few places in the Czech Republic where Green politics and policies can be tested and seen in action. The Czech Greens are a part of the broad coalition making up the city’s government, having received 11 per cent of the vote in the last municipal elections of 2014. No small feat for a party without a single elected member in the parliament. To connect the dots of sustainable city policies, Greens must contend with the region’s past – and also preserve some of the positive aspects of the communist period – as well as with pro-business, anti-regulation attitudes inherited from recent decades during which Central and Eastern European governments embraced neoliberalism. At the heart of their urban struggle, Greens attempt to tackle two major political challenges – development and mobility – and therefore forge their vision of the city, namely one that connects beyond the city limits and ecosystem.

This article is from the paper edition
Talk of the Town: Exploring the City in Europe
Order your copy

Like in most of the Central European region, Prague still remains quite friendly to business developers and their projects, often giving them a deciding say over the city’s own strategic plans. In 2010, a report on property developers in Prague observed that, “the asymmetric power relationships existing between the municipality and the private sector can lead to the development of regeneration projects that are loosely regulated and primarily serve the profit motives of international capital, rather than the pressing needs of the municipality in question, such as the construction of affordable housing.” [1]

During Prague’s municipal elections in 2014, [2] Greens entered into a coalition in which Matej Stropnický, former leader of the Czech Greens, became vice mayor, making him one of the highest-ranking elected Greens in the country. [3] It didn’t last long. Within a year of proposing a controversial plan to restrict the power of developers and put in more building regulations, the other members of the Prague government called for his resignation.

“There’s people who would just let the developer do what he wants and make the profit he wants to make. Then the city has to build all the rest, the schools, the parks, the public transport and so on,” explains Stropnický.

“I started questioning this system because it was creating deficits in the public budget. I was saying that the developers are making profits, so they should cooperate with the city on building the public goods. That caused a reaction of course, from this financial part of the city which is very strong in Prague, a very quickly developing city.”

After Stropnický’s plan to rein in the developers was rejected, he was replaced as vice mayor by another Green, Petra Kolínská, and the Greens remained in government. Kolínská, a Green local politician since 2006, is more diplomatic than her predecessor, but still struggles with the cautious approach of coalition partners which has reached a level where citizens and businesses are outpacing their elected officials in creating progressive change in their city.

“I see that in the field of activism, active citizenship, we have very interesting results,” says Kolínská. “For example, Prague Pride, other human rights or music festivals, pianos on the streets, new start-ups like bike-sharing, or guerrilla gardening. You can feel how people are enjoying public space more than ten years ago. But [local] companies and people are more active and more progressive than their political representation and I feel that the political representation is too careful.”

But regarding plans for new developments, the Greens in the Prague City Hall have tried to find a way to make sure it is done with public interests in mind and with the gradual integration of a more sustainable vision of the city. As Kolínská explains: “Ten years ago, the developers were used to corruption in the city hall, to sending money to private accounts in exchange for the building permits, regardless of public opinion, of course. Now we improved the rules for collaboration and communication between private developers and city hall offices. For example, in the autumn of 2017, a new city planning centre opens where the city and the developers introduce their projects and everybody can come and see the projects in advance, send questions and get answers. In Smichov [Prague 5], there is a big brownfield where a pilot project – on the collaboration between developers, citizens, and politicians – invited citizens to contribute to the design of public spaces for this private project. Private companies had very positive feedback because public participation helped them improve their projects. Developers are a natural part of society in the city, but they have to respect strict rules. By now, developers have slowly learned to invest some of their money into public space and entities, such as schools or kindergartens. Ten years ago, this approach didn’t exist.”

Another Green fight has been to lower the price of public transport. In Prague you can now get a yearly transport pass for 3,650 Czech crowns (140 euros). This was a campaign promise in 2014 and carrying it out is something they don’t mind boasting about. And rightfully so. Prague’s reliable and efficient public transport, a legacy of their past, is a crucial aspect of life in the city.

Despite this, the Greens regularly find opposition in the local council when trying to advocate for more public transport. “Transport is the thing that we have the most controversies over in the assembly here in Prague because we want to explain that the streets should be for different types of transport, not just for cars,” continues Stropnický.

Improving public transport and shifting away from personal car usage inevitably meets opposition from pro-business actors in the city council and again from developers. “It’s a conflict we are facing here; we’re trying not to expand the city into the suburbs any further and trying to concentrate the new buildings in the city centre or closer surroundings”, says Stropnický. “The rising number of people travelling by cars, mainly from the suburbs, is a problem. This creates again a conflict with the other areas, with the developers who bought the land in the suburbs for cheap to develop housing outside the metropolitan centre, something we opposed.”

Kolínská sees public transport as being even more crucial – as one of the ways Greens can appeal to rural voters, a demographic which they have struggled to reach, something which remains one of their greatest challenges. In the last Parliamentary election in 2013, the Greens received twice as many votes in Prague as they did in the rest of the country. No other Czech political party has such lopsided electoral support.

“In the former regime, public transport covered almost every village, every small city”, explains Kolínská. “After the change of regime, there was a very fast change in the financing and image of public transport. Buying became one of the first steps to show that we are free, rich people. So people moved away from trains and buses to cars. Now, there is a wish to return to public transport but there are no provisions. As the Green Party, we want to support public transport, not only in the big cities but also to have good connections between cities and villages. I think it’s the most important area in which the wishes of people from the countryside are in line with our policy.”

Trying to find the common interests of rural and urban inhabitants and translating that into policy is not just something the Czech Greens struggle with; it’s an issue across the continent. As Stropnický explains, “The reaction of the people living in the countryside in Great Britain for example, when you look at Brexit, is quite similar to the reaction of the countryside of the Central European regions: we are feeling left by the wayside. We’re just all feeling that we’ve been left behind here and that it’s just the leftovers of your profit that you’re leading us towards. So we are turning to people who acknowledge this problem.”

The city question therefore reaches far beyond and above urban policies in the Czech Republic, because the country is the most Eurosceptic of all the former Eastern bloc, with only 35 per cent of the country believing that staying in the EU is a good thing. “Definitely in the capital and the bigger cities, the EU is more popular than in the countryside or small villages”, says Kolínská. The Czech Greens are one of the few parties (if not the only one) in the country which is clearly pro-European. The capital city and bigger cities then become a great political lever for positive messaging on Europe – as long as they don’t drift away from the other towns and rural areas.

Without all of the pressures and complexities of national governing, Prague, like many other cities, is the type of place where experiments can be done on both a policy and political level. So far, it seems that the Czech Greens are taking advantage of this. Whether it will be fighting against corrupt developers or improving public transport, what the Czech Greens are able to do at the city and local level will be important to learn what Green governance actually looks like and what it can bring that other political forces don’t.

2 The local government of Prague is arranged in a tiered system, with the Magistrate of the Prague being at the top, followed by self-governing municipal districts. The responsibilities of the City Magistrate include public transport, waste collection, police, care of historical sites, or other issues of citywide significance. The municipal districts are responsible for parks, schools, some social and health programs, and public housing.

3 The Greens currently have six elected Senators as well as some regional and local councillors throughout the country. 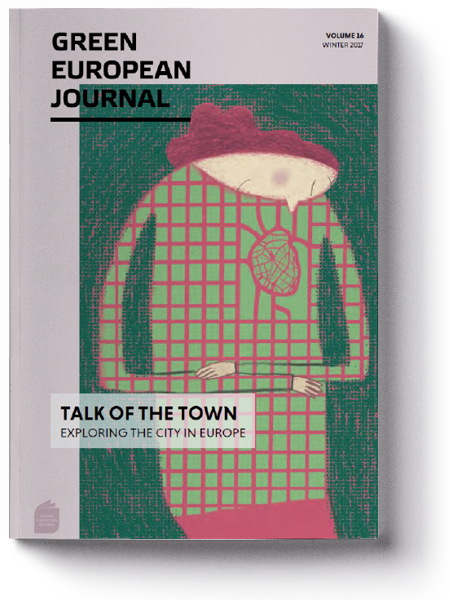 'Talk of the Town' focuses on cities and their significance across Europe and beyond, both as the site of key transformations and new dynamics, but also as political actors in their own right.

Miami Afloat: Facing Climate Reality in the USA Turning Point for the Czech Republic? An interview with the Czech Greens Leader The Cost of Making America Great Again

An ambitious policy to encourage cycling sparked by the pandemic has the potential to transform the French capital's transport landscape.

Presenting "Schuman goes to China", the cooperation on green tech, urban planning and big data that shaped the geopolitics of 2049.