In our second reading of The New Urban Crisis, Cosme del Olmo pushes the conclusions of Richard Florida’s recent work on urban dynamics and looks to find solutions beyond the mega-cities of the global economy.

“Are cities richer, safer and cleaner than they have ever been, or have they become areas for consumption by the super-wealthy that increasingly tear middle and lower classes apart?” – Richard Florida.

If the quotes that preface an academic or literary work often guide the reader in a subtle or veiled way towards the underlying principles that inspired the author, those that introduce The New Urban Crisis (Richard Florida, 2017, Oneworld) are an unequivocal declaration of intent. Two notable social and urban thinkers as emblematic as Plato and Jane Jacobs establish from the outset the central idea of the work: that any city in the world is in fact two cities, one for the rich and the other for the poor, but that urban environments can generate opportunities for all, so long as they are designed for all.

The problem of growing inequality in cities and the possible solution of an urbanism for all are the building blocks upon which the premise of The New Urban Crisis is constructed. The foundation is a rigorous methodology, based on analysis that is thorough and meaningful, but that remains accessible. The abundance of data not only simplifies, measures, and illustrates the technical concepts such as urban density and gentrification, but can also be understood as a redemptive process for the author. Florida is an acknowledged expert in the field: as he himself recounts in the prologue, this renowned urbanist has received widespread praise over the last decade for his work on the regeneration of post-industrial cities and what he dubbed ‘the rise of the creative class’.[1] This positive analysis of urban living centred around the ‘three T’s’: talent, technology, and tolerance, seen as having transformed cities into vibrant places full of quality of life, economic progress, and success.

Until the publication of The New Urban Crisis, Florida was the torchbearer for a group of academics he himself labelled ‘urban optimists’ who advocate the potential for cities to engender progress and well-being and believe that these environments are richer, cleaner, and safer today than they ever have been. In contrast, ‘urban pessimists’ view urban centres as areas of inequality and class division, only capable of generating opportunities for a select group of individuals. The New Urban Crisis attempts to move beyond this dichotomy and explores a more eclectic approach. If we examine the two building blocks referred to earlier, the first section – considerably lengthier and which can be considered analysis – is an acknowledgement of the structural problems inherent in new urbanism. While the second – confined to the final chapter and which can be considered the proposed solution – is confirmation of Florida’s innate urban optimism. Although the author’s background focuses his work on North American cities, in both sections it is possible to see its relevance to urban policies in Europe, precisely because of the increasingly global nature of cities that the author himself points out. And, in fact, the events that impelled Florida to review his immutable franchise concepts come from both sides of the Atlantic, albeit from within the English-speaking world (the election of right-wing populist Rob Ford in Florida’s adoptive city of Toronto, Brexit, and the triumph of Trump).

A preliminary analysis of these events reveals a gulf between the cities in high demand and all other populated areas. Florida thus returns to the concept of ‘superstar cities’, criticising the detachment of these cities from other towns and regions. According to existing economic and social indicators, London and Paris are the two giants that enjoy such a status at a European level, but the appeal of big cities as places of professional and intellectual pilgrimage is also mirrored nationally and regionally. This pre-eminence leads to a scenario aptly described by Florida as ‘winner takes it all’ urbanism, wherein the most sought-after cities offer more opportunities, in turn attracting more talent, thus generating even greater appeal in a cycle that sets cities with a less powerful brand on a trajectory of decline.

As a direct consequence of their appeal, superstar cities see their equilibrium altered and become prone to economic segregation. The phenomenon of rising housing prices in central urban spaces that forces pre-existing residents out to peripheral zones, known as gentrification, is the central focus of Florida’s analysis. Superstar cities suffer from a crisis of success, which prevents their own inhabitants from keeping up with the pace of growth. Europe is no stranger to this trend. London and Paris both feature highly on several indicators of intra-urban inequality. In short, the most prosperous and attractive cities are also the ones that leave the most individuals behind. Urban areas are experiencing a rapidly shrinking middle class and a diminishing quality of life in the suburbs, which are seriously beset by poverty and insecurity. The urban crisis is exacerbated in developing countries, where there has been a complete breakdown of the traditional association of cities with prosperity.

Superstar cities suffer from a crisis of success, which prevents their own inhabitants from keeping up with the pace of growth.

Unlike the analytical section – both extensive and accurate – the section on proposals is less consistent. Some critics suggest that Florida’s study is part of the problem, not the solution, as it represents an elitist vision of cities. The author exhibits a brilliant understanding of urban problems, but his foray into interventionist policies – the promising “7 pillars of urbanism for all” – falls short.[2] Beyond calling for local government officials to implement remedial measures – which verges on the idealistic given the limits of their authority – and urging national politicians to include the issue in their agendas, the generalisations of The New Urban Crisis are well intentioned, but they deserve another work and not just a chapter that lacks concrete solutions.

Throughout his work Florida successfully sets out the threefold nature of the city: as an engine for creativity and growth, as a magnifying glass on society that exposes economic inequalities, and as a political battlefield. Urban spaces are becoming a stage for winners and losers, just like the societies they accommodate.

Progressive and environmentalist political movements should be the key players in developing solutions that avoid this polarisation and prevent a ‘GAFA’ phenomenon translated to the urban setting.[3] Essentially, similar to what happens in an oligopoly in the world of business, a very small number of companies (in this case, cities) dominating the market is not beneficial to the consumers (in this case, citizens), whose options are limited, forcing them to opt for the main sites of opportunity. This in turn widens the gap between the large capitals and other areas, to the detriment of territorial cohesion. And while European progressivism has flown the flag for the middle class on the social front, it has not taken steps to do the same on the demographic front, despite the social and environmental benefits brought about by a balanced distribution of the population. Clearly, it is not a matter of obstructing by force the natural flow of people moving to places that offer more opportunities, but of creating the right conditions to ensure that talent and prosperity are not confined to a small number of urban centres.

From a European perspective (an area much more densely populated than the United States), intermediate cities, also known as secondary cities, could accommodate many of the proposals outlined by Florida, though the author does not address this possibility in his work as these types of urban centres are fewer and farther between in North America. The definition of intermediate cities varies depending on the geographical and demographic conditions of the country in question.[4] An intermediate city in Europe (such as Lyon, Bilbao, Bonn, Manchester, Oporto, Florence, Eindhoven, or Malmö) could equate to a small city in China. In any case they make up a large majority of urban centres: there are almost 10 000 cities worldwide with more than 50 000 inhabitants, but only 442 of these have more than a million inhabitants. The influence of intermediate cities in relation to urban agglomerations has been on the decline in recent decades, according to the United Nations Department of Economic and Social Affairs (DESA), which estimates that the number of mega-cities has risen from 10 in 1990 to 28 in 2014.

progressive politics should place its bets on a conglomeration of intermediate cities, capable of attracting enough talent and creativity to allow them to become engines for economic growth

The lack of a universal definition for intermediate cities means that there is no reliable data for this category of city – one that is vital for sustainable development and social equity, that serves as a bridge between the rural and urban worlds, and that eases the excessive economic dependence on the big cities. Their close relationship to the people, their ability to create a more coherent social fabric, their simplicity in terms of governance and civic participation, and their contribution to the local economy, are all factors which have led international organisations to highlight the value of intermediate cities in recent years. The OECD, the International Labour Organization, UN-Habitat, the World Bank, and Cities Alliance all recognise their importance and criticise the lack of information on the cities that house more than half of the urban population. Faced with the decline of the middle class in increasingly segregated cities, progressive politics should place its bets on a conglomeration of intermediate cities, capable of attracting enough talent and creativity to allow them to become engines for economic growth, but perhaps without so much glitz and glamour that they become devoured by their own brands.

[2] According to Florida, the 7 pillars are: using clustering for the benefit of all; investing in infrastructure that favours density and growth (as opposed to urban sprawl); building more affordable housing; transforming low-paid jobs into middle-class employment; tackling poverty with investments in people and places; leading a global effort to achieve prosperous cities; and empowering cities and the communities that inhabit them.

[3] GAFA, the acronym for Google, Apple, Facebook and Apple, refers to the four tech giants that dominate the market in a growing number of sectors.

[4] UN-Habitat defines intermediate cities as urban areas with a population between 100 000 and 500 000 inhabitants (UN-Habitat, 1996), while the organisation Ciudades y Gobiernos Locales Unidos considers that they have less than one million inhabitants.

The New Urban Crisis: A Manifesto for the Status Quo Welfare and Social Issues
By Samir Jeraj

Growing inequality has become a hallmark of many cities. For this reviewer, Richard Florida's latest book is a worrying prescription for more of the same.

Poland’s Futures: A View from the Countryside Politics
By Przemysław Sadura

Poland's cities are emptying as those who can move out for the peace and quiet of a country life. What does a strained relationship between city and country spell for Poland's future? 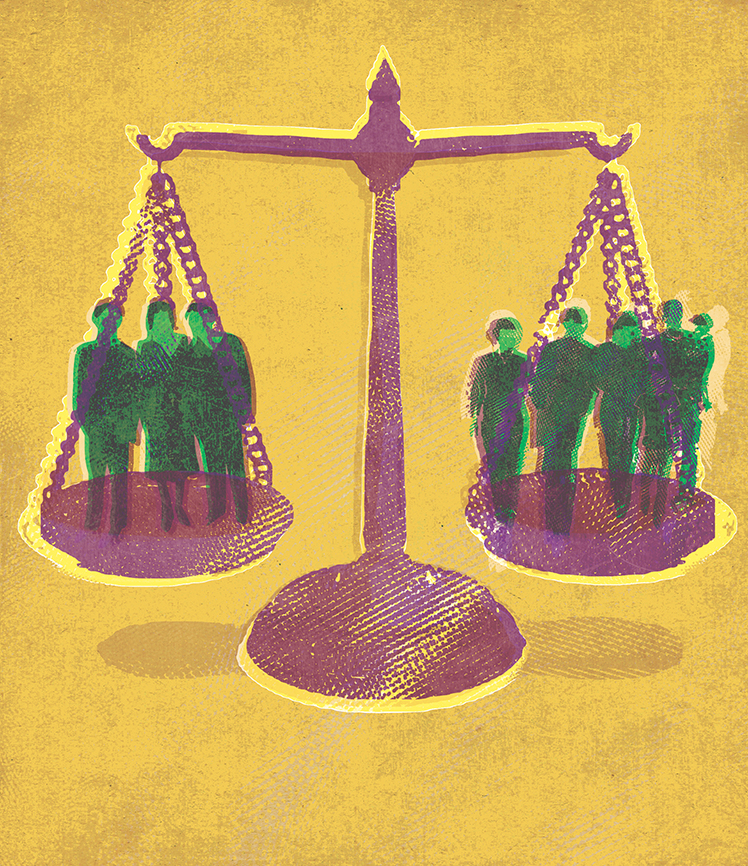