German state elections held on 13th March produced significant levels of support for the Alternative for Germany (AfD), but where does the German party system stand overall after the elections? Germany is now heading toward a new system split between establishment parties and populist challengers, paralleling previous developments in countries like Austria.

On 13th March, three German states went to the polls to elect new legislatures. In the old West Germany, two prosperous southwestern Lander, Baden-Württemberg and Rhineland-Palatinate (Rheinland-Pfalz) considered whether to re-elect their centre-left Social Democratic-Green governments. In the former East Germany, sparsely populated Saxony-Anhalt (Sachsen-Anhalt) judged the fate of its grand coalition administration, an alliance of the Christian Democrats (CDU) and Social Democrats (SPD): identical to the one Christian Democratic leader Angela Merkel leads in Berlin as federal chancellor.

Regardless of local differences, German commentators agreed that these were classic second-order elections, where voters were to a great extent judging the policies of the Merkel government, and most especially her refugee policies. These refugee policies have fuelled the growth of the Alternative for Germany (AfD), formerly an elitist soft-Eurosceptic party that has embraced social conservatism and right-populism along the lines of the Freedom Party in neighbouring Austria, or the Swiss People’s Party in Switzerland. Its leader, Frauke Petry, has gone so far as to suggest that the border police use armed force to stop migrants.

Merkel has refused to make any moves to limit refugee arrivals, even in the face of the AfD challenge and growing opposition in her own camp (including the threat of a lawsuit from her allies in the Christian Social Union – CSU). This turmoil on the right created some odd dynamics in the race. Merkel has refused to limit refugee arrivals into Germany, so the CDU candidates in Rhineland-Palatinate and Baden-Württemberg distanced themselves from Merkel.

Meanwhile, the SPD leader of Rhineland-Palatinate, Malu Dreyer, and the Green premier of Baden-Württemberg, Winfried Kretschmann, embraced Merkel’s “welcome culture.” Malu Dreyer told her CDU opponent in a debate that “The chancellor is simply right. We need a European solution, and you are stabbing her in the back.” Kretschmann went so far as to say “I support the chancellor’s course with all my strength and passion.” So what happened? And what does it tell us about the state of the German party system?

The German party system and the 13th March elections

The big headline will be the gains made by the AfD insurgency. The party won nearly a quarter of the vote in Saxony-Anhalt, coming in second, with more votes than the SPD and Greens combined. As a right-populist party, political observers would expect the AfD to do well in eastern Germany, which has fared poorly after unification. Right-populism appeals to “modernisation losers”, often former industrial workers or lower-middle class voters who lost out to globalisation, feel divorced from the political elite, and may see immigrants as challengers for resources and symbols of their economic and social decline. Saxony-Anhalt has lost more than a fifth of its population since reunification. But the AfD did well in prosperous Baden-Württemberg too, winning 15.1% of the vote and coming in ahead of the SPD, the country’s oldest and second-largest party. In Rhineland-Palatinate, the party managed 12.6%.

Why did the AfD do so well? Well, protest voting forms part of the answer, being intrinsic to second-order elections. Most right-populist parties do better in these elections than in general elections. Nor can we argue that Germany is bucking a trend; the success of right-populists is a Europe-wide phenomenon (I discuss another aspect of it here). The AfD is drawing on common support for the main elements of right-wing populist appeals, defined by Cas Mudde as “a combination of nativism, authoritarianism and populism.”

There are two features of the AfD’s success that are worth noting. The first is their ability to turn out previously abstinent voters. The Guardian reported that “in Saxony-Anhalt, as many as 40% of AfD voters were previously non-voters.” ARD/Infratest dimap found that more than a third of AfD voters in Rhineland-Palatinate were former non-voters, and about 28% of those in Baden-Württemberg. This fits a pattern; in the Land elections in Brandenburg and Thuringia in September 2014, non-voters provided nearly a quarter of the party’s 150,000 votes across the two states.

Turnout was up in all three states on 13 March. This confirms earlier research from Norway that showed that higher turnout (that is, the entrance of previous non-voters into elections) can aid both the left and the populist-right, since both appeal to lower-income groups. The elections also showed that left-wing populists in Germany do not seem to be able to make similar appeals to non-voters, even those parties that we would expect to appeal to low-income voters or East German modernisation losers; the Left Party (Die Linke) did badly in all three state elections.

The other point to stress – and one which strongly affects the fortunes and coalition strategies of the mainstream parties – is the salience of the refugee issue. It is not exactly a secret that right-populist parties are ethnonationalist and mobilise on immigration issues. But as Cas Mudde points out, they do best when these sorts of mostly post-materialist identity issues come to the fore.

What is even more interesting is how this focus on post-materialist issues affected the mainstream parties. As Ed Turner writes, the state Christian Democratic leaders who were most eager to distance themselves from Merkel’s policies – Guido Wolf in Baden-Württemberg and Julia Klöckner in Rhineland-Palatinate – were the ones who did worst at the polls. Socially liberal voters who backed Merkel flocked to vote for the Green Kretschmann in Baden-Württemberg, and SPD leader Malu Dreyer in Rhineland-Palatinate.

A positive interpretation of this would argue that this means Germany has a large pool of socially liberal mainstream voters who embrace Merkel’s openness to immigration, a generosity of spirit that must comfort the chancellor and those of us who watch the right-populist advance with trepidation. But even more telling is how indiscriminate these socially liberal voters are. In Rhineland-Palatinate, they flocked to the SPD and left the Greens to suffer severe losses. In Baden-Württemberg, they chose the unusually pro-business Kretschmann and let the SPD go into freefall. In a PR system, there is far less pressure for tactical voting – it exists, but not to the same degree as in the United Kingdom or France.

Why is that important? Firstly, because it implies there is no longer a class barrier to switching between Social Democrats and Greens. The SPD is the German labour party, the party of the working classes, and once a bastion of orthodox socialism. It abandoned the democratic replacement of capitalism and class struggle with the 1959 Godesborg Programme, but even decades later, it remained more proletarian than the mostly middle-class Greens. Now it seems the two parties are interchangeable, and to an extent, even interchangeable with the CDU – in Baden-Württemberg, 31 per cent of CDU voters from the 2011 election voted Green. Dirk Kurbjuweit, writing in Der Spiegel, concluded that Angela Merkel had “managed to transform the CDU into a green-liberal-social democratic amalgam, having largely exorcised conservatism from the party.”

And so Germany expresses the crisis of party politics that Peter Mair outlined in Ruling the Void and his work (with Richard Katz) on cartel parties. The mainstream parties grow closer together, partly because the defeat of socialism has so reduced the ideological space in the mainstream; new populist parties emerge, left out of this consensus. Because the system cannot absorb them, politics grows more polarised, the public angrier. To cite Ed Turner again, the result is that these same disgruntled voters continue to cast the mainstream parties as identical and identically illegitimate.

At the same time, because they have lost support, the mainstream parties increasingly have to govern together, despite being nominally from very different party families. In Baden-Württemberg, the SPD did so badly that it can no longer form a majority with the triumphant Greens, forcing Kretschmann to form either a Green-CDU grand coalition or a Green-SPD-Free Democratic Party (FDP) coalition – even though the FDP is a small-government liberal party. Dreyer faces the same problem in reverse; in her state, the Greens did badly, so she has to add the FDP to her existing government or form a grand coalition. In Saxony-Anhalt, the two big parties – CDU and SPD – no longer even have a majority between them.

The end result may be a German equivalent to a model we already see elsewhere: Increasingly, there is a new cleavage between “establishment” or “mainstream” parties and their populist challengers. In some countries, such as Norway, Denmark or Finland, the populists are being absorbed into coalition politics. In others, like Sweden and now Germany, they are not, forcing the existing parties into increasingly compromising positions and threatening the stability of the political system. (The AfD has already stated that it does not intend to enter a state government; nor will Merkel be changing policy or considering a CDU-AfD pact.) The first scenario has helped give us spectacles like the Danish refugee law. As for the second scenario – well, at least Germany will never run out of Weimar references.

This article was originally published on LSE’s Europp Blog.

Is right-wing populism really on its way out - or is it seeping into the mainstream? How can it be countered? An analysis in the wake of the upcoming elections.

An interview with Benjamin de Cleen on nationalism versus populism in Europe, the Flemish far-right, and the limits of the cordon sanitaire. 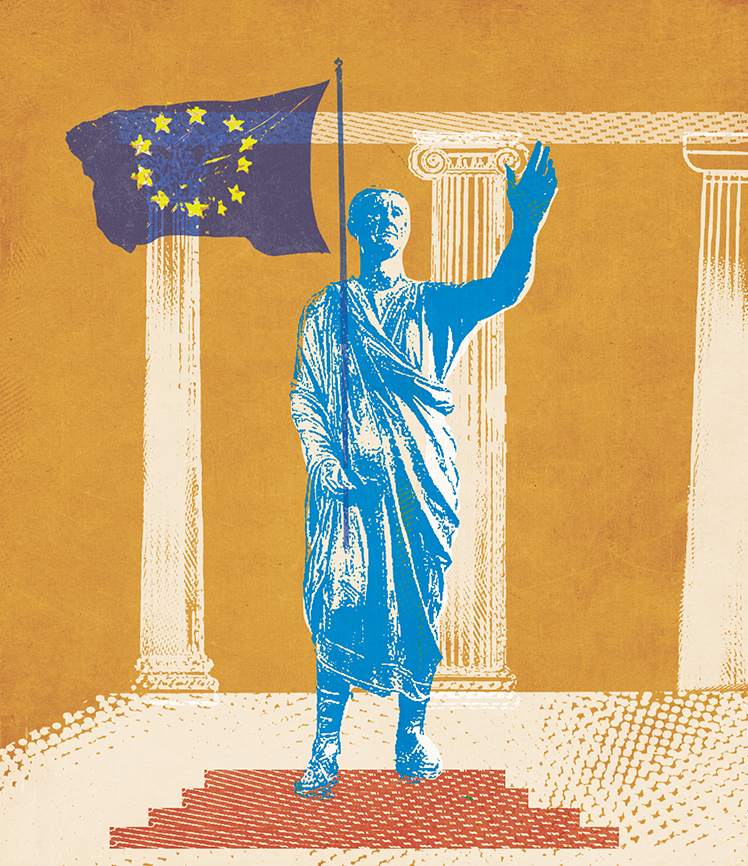