Finance and Economy
By Hanna Clairière
All info
EN

The Entrepreneurial State by Mariana Mazzucato takes an original approach towards the debate of how to create growth in Europe. By highlighting the role of innovation within a demand-related economy (Keynes), and through various concrete examples from within the corporate and industrial world, Mazzucato describes how State-directed institutions contribute to innovation and suggests how financial returns could be brought back to the State, thereby positing innovation as a key for creating societal growth.

In trying to dispell some common myths, such as the idea that the free market auto-regulates itself, or that the state is bureaucratic and the private sector originates as the guarantor of innovation and growth, leaving for the State only the role of fixing market failures, Mariana Mazzucato describes her work as a pamphlet, rather than a book. She points out that these misconceptions, taken for granted by the public, are partly due to the role of the media, but also to governments’ and financial bodies’ lack of information (take the roles of Westminster, the European Central Bank (ECB), or the Eurogroup, for example).

Since Adam Smith, many economic theorists have argued the omnipotence of the free market economy. Moreover, there have been periods when the State has been the origin of a totalitarian regime [i] by not allowing any interaction between State and Corporations – Mazzucato gives the example of the USSR between 1975 – 1985, where all resources were directed to the military sphere without any interaction between the State and the entrepreneurial world. This is a part of the old ethical concern in Europe that prohibits interactions between pure research and financial or other interest groups.

From ideas to products

This is precisely where Mazzucato discusses a new way of approaching the role of the State within innovation finance. A common misbelief, due to insufficient insight into how innovation is created and how it functions, is the idea that it would be venture capitalists that guarantee innovation and therefore also growth and job creation within our societies. Actually, it has turned out to be the opposite: the financing and the role of  State based institutions – through university and government laboratories – are crucial for innovation. Furthermore, even in the USA, which has a very strong corporate world, the main source of the greatest discoveries and products within innovation is still the State (the Federal Treasury and the Governmental Administration included). The role of venture capitalists, who are risk-averse and refuse to invest in long term research, is largely overestimated; it is still the State that has been the principal initiator, carrying a vision and in charge of financing the long-term risks.

Another concern about short-term sight, due to lack of information, is the common belief that the main IT and technological-based inventions that we profit from today are the result achievements from the past 10 – 15 years, whereas in reality, the source of these inventions can be traced as far back as the 1950s. This lack of information has has severe consequences on our understanding of the functioning of innovation in our societies today.

Deconstructing myths about the roles of the private and public sectors

It is important to discuss the complicated nature of innovation. It is not just investing in Research and Development (R&D), creating patents on products, or by directly investing in SME’s or Start-Ups, that innovation appears. It is far more a question of knowledge acquisition (education of researchers at scientific institutions) and especially of knowledge distribution through human resources networks within and between the public and private sector actors. This means that, as Mazzucato highlights, using the USA as a model, cooperation between the different actors within a society is indispensable in order to guarantee quality innovation, growth, and job creation. Concrete examples of knowledge based innovation are:

Apart from deconstructing the myths concerning the role of distribution between public and private sectors, one of Mazzucato’s core points reveals the severe hard-locks for the State in getting back the money invested in basic research, since the marketing and sales procedures are taken care of by the private sector, mainly. This is particularly stark in the pharmaceutical industry, where drug-producers openly posit themselves as the initiators of a product and as a result gather all the financial benefits from putting forward, falsely, their role as having made the discovery of the drug. Additionally, low-demand ‘orphan drugs’ in some cases bring in more revenue than ones in much higher demand, which shows that the State is able to contribute by developing a better market strategy than the private sector, thanks to its long-term vision based on the needs of taxpayers as humans and not only for the sake of financial benefits.

Another big issue concerns company and corporate tax-evasion, where taxes are not paid – entirely or in full – to the State, even if the company or corporation has largely benefitted from State based financing in the beginning – take Apple, for instance. But, the ‘national’ characteristics of each State play a role. Nokia, the Finnish mobile phone and IT company, poured a lot of money into the State Treasury between 1985 – 2010, thanks to the socio-institutional tradition in Finland, where even private companies are ‘good’ tax payers. The Danish solar energy company Vestas, which profited in the beginning from funds coming from California and from the US Federal Treasury, was finally saved from bankruptcy thanks to the Danish governments’ comprehension. Cooperation between different institutions is necessary: the vital role of human resource networks within the public and private sector is crucial. Indeed, the State has also turned out to be capable of resisting the uncertainty in calculations on provisions of rent-a-bility, which venture capitalists rely on in their risk avoidance. The State’s capacity to create new laws and regulations in order to monitor the outcome of an innovation is made possible by imposition through procurement and commissioning  – like when State owned companies are allowed to create patterns on products – and thus, increasing the role of State control. The multiplication and democratisation of European institutions have also positively contributed to this increase of control. But the regulatory role of the State has been minimised by most actors and preference has been given to the free market’s supposed auto-regulation.

Mazzucato discusses a range of theories in this book [ii], concerning the demand-based economy of innovation. But the main trend within innovation economy has shifted from theories presented in the form of mathematical equations (exogenous theories) to endogenous approaches, where innovation is based on knowledge economy and behavioural economics [iii] .

The case of the green energy industry

The case of green energy is particularly illustrative of the complexity of the different factors implicated in innovation economy. First of all, Mazzucato constates the following: there is, on the whole, a lack of political willingness from the side of governments (in Europe and globally) because sustainable products and development are not perceived as approachable investments. States are today supposed to take into account dual objectives to avoid global warming: innovation should lead to job creation and also to the decreasing of carbon emissions.

In fact, the role of the State has become particularly important in the case of green technologies, where venture capitalists expect the State to dictate the duration of financing and to create a positive atmosphere towards green energy sources by putting in place a reliable framework. Otherwise, venture capitalists will not invest in it. In the case of Great Britain, the promises from the side of the government have not been kept and the infrastructure needed for the creation, investment and development of green energy sources has not been implemented (cf. the DARPA and SBIR  in the USA)[iv]. The Green Investment Bank, for example, alone, cannot do enough. Mazzucato gives the example of Solyndra, a company that went bankrupt while having received investment from the State for green energy. Its own shareholders abandoned the project because of competition; they simply withdrew all their money from the project, which ended in a huge loss of jobs. Yet, in the media, this has been given as an example of how the State fails to ‘pick the winners’.

A good example of State intervention is the evolution of nanotechnology industries. The US State invested in nanotechnology when they realised its potential for growth, not for its potential to kick-off the green energy transition and to put an end to fossil fuels. But this highlights what Mazzucato brings forward as an important task for the State: to use its regulatory and law creating capacities. The US governments’ active role in regulation made it possible for venture capitalists to invest in it, due to the reliable frame and security, guaranteed by the State. Venture capitalists have been more reluctant in the case of big green energy investment projects, such as manufacturing solar energy panels, windmills for aeolian energy, advanced biocarbone refineries, emission storage etc. Globally, these are dependent entirely on state guaranteed investments [v].

Nevertheless, Germany is the first country in Europe to have begun the project of abandoning nuclear power centers by 2030, down to a special government subsidised banking and investment programme which has been created for green investments and can be compared to the US DAPRA and SBIR programmes.

The true story must come out

The model presented by Mazzucato relies heavily on the USA and therefore, specific cases of green energy transition policies in European countries have not been thoroughly studied. This pamphlet’s biggest advantage lies in showing the unfair treatment that State suffers when it comes to its capacity of innovation. Particularly annoying are the large company tax-avoidance strategies which cause huge losses for the State, the way the private sector refuses to return the benefits to the State and the huge losses of jobs due to cold-blooded financial calculations. It seems that we are just beginning to get rid of economic approaches based on the gut-instinct as the only way of seeing how human societies behave when it comes to money [vi]. By emphasising the role of human resources networks and especially the role of the State as the regulating and law creating power, the importance and the real value of human capital are clearly the sources of real innovation.

Paul Mason – Post-capitalism: A Guide to the Future Democracy
By Derek Wall

Paul Mason, economics correspondent for the UK’s Channel Four news, argues in his new book Post-Capitalism that capitalism is failing and will be replaced by a new system. Everyone should read this provocative and inspiring account of how, if we want to, we can transform our present economy to one based on sharing, democracy and participation.

If the Green movement is to change the status quo, it will have to change too. The interrelationship between the plundering of the earth and the exploitation of people requires a much more principled and more consistent struggle against the capitalist system than we have seen in recent decades. 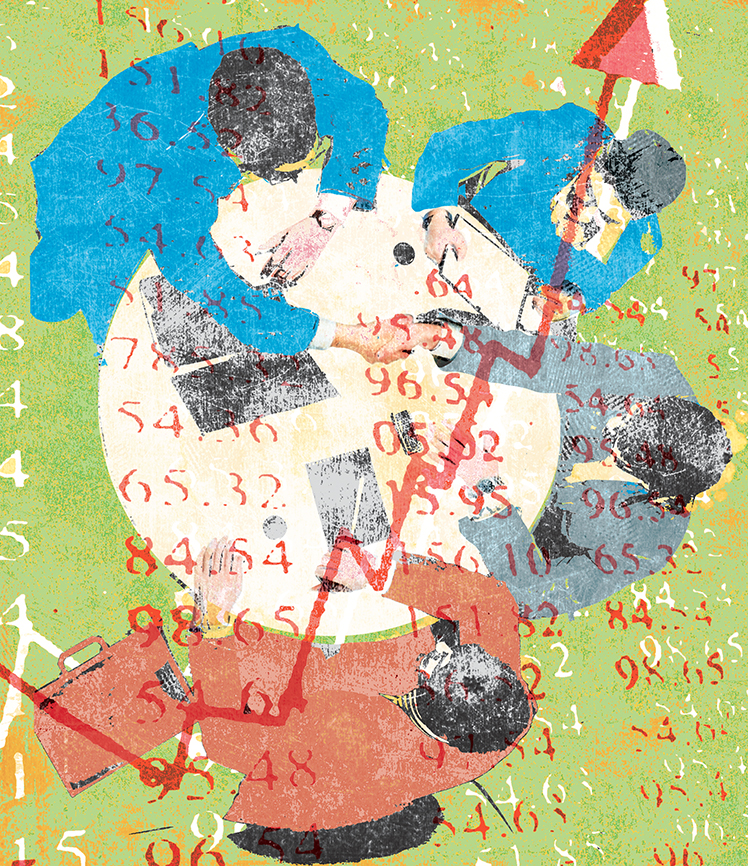