Europe is suffering a massive economic and financial crisis. Debates are taking place all over the continent and doubts are being raised whether the prevailing economic system, capitalism, has finally come to its knees. Some are even talking about a post-capital society, claiming that the free market-ideology simply doesn’t work, at least not for the majority of EU citizens.

One thing is clear, though: capitalism has been impotent in responding to the current shocks and crisis. One of the most embarrassing facts today is that every fourth European under 25 is unemployed, and this figure is set to rise. Today’s capitalism is failing. The blame-game is on-going – how did we get into this situation and who should take the responsibility for getting us out of it? From its conception the European Union has had to manage tension between opening up markets to provide free movement of people, capital and goods, and at the same time, trying to balance the effects of this freedom with a ”European social project” to tackle exclusion and poverty. This liberal-social EU, was it just a dream that never came true or are there ways in which it would be possible combine these both?

Is the ’only for-profit’ business model the best way to produce goods and services for people, considering that it is often associated with lack of labour rights,  damage to the environment and huge profits for shareholders at the expense of everything else? In the end, the fact remains that status quo is not an option anymore; we need things to change and we need to change them fast.

Austerity measures causing a shift in social and health policy

Austerity measures – cutting public budget deficits by increasing taxes and making spending cuts – are taken for granted as a way out of the crisis. However, austerity plans have caused a worrying shift in social and health policy. Social and health care sectors are the biggest spenders of public money and many services are now being outsourced and privatised in hope of creating savings.

Unfortunately this has been a very short-sighted approach. The free market, endorsed by the current procurement and state aid rules of EU, in public service has meant that mainly big national and multi-national companies win public contracts by offering the cheapest contracts. Over time, competition dies out leaving these large companies to put their contract prices up. The EU’s big idea of diverse and competitive markets is made redundant. In Finland, for instance, big private companies driving to meet their quarterly targets are making 20% profits with tax payers’ money in the care sector. Surely, it would be much better to invest this money in increasing the quality of the service, in well-being of the staff and creating added social value in the community instead of making overseas shareholders even wealthier?

Instead of an instant move to marketised services it is first important to decide what it is that is needed from the services; what is the desired outcome of the service. The delivery method should then be decided accordingly. Some services are clearly best to keep under public provision and some might actually benefit from free competition of bigger players, whereas some would produce the required wider outcomes through more innovative means of delivery. Public bodies should think how they might use public service contracts to improve the economic, social and environmental well-being of our communities and thus, provide long-term savings through sustainable growth.

Market fundamentalism with its idea of creating freedom of choice, and citizens needs being served simply by supply and demand, is naive. It forgets about the consequences of market failure for communities and the structural issues that affect disadvantaged people (e.g. lack of affordable child care and public transport, racism and sexism etc.). Not everyone can have the freedom so eagerly promised under capitalism. Austerity plans should not be used as an excuse for absolving public responsibility for looking after the most vulnerable.

Much of the blame for the current crisis has been placed on the international finance sector. More widely there has been a reaction against corporate greed and a questioning of whether the interests of international capital are in conflict with those living ordinary lives across Europe. In addition to the call for better regulated markets there is an increasing interest in different business models that can balance monetary, social and environmental needs.

In Finland, big private companies driving to meet their quarterly targets are making 20% profits with tax payers’ money in the care sector. Surely, it would be much better to invest this money in increasing the quality of the service, in well-being of the staff and creating added social value in the community instead of making overseas shareholders even wealthier?

Social enterprise or social business; which for the purpose of this article are used as synonyms; does not anymore operate in a niche market but is becoming more of a global movement. In Europe alone, it is estimated that there are a 11 million people (6% of total employment of EU) working for social economy which, more often than not, uses social enterprise business models to achieve its social goals.

The definition of social enterprise is still being discussed all over the world. However, it is largely agreed that it is a business that operates in the markets to fulfil its social and/or environmental purpose and that it re-invests the majority of its profits into realising its social and/or environmental mission. They characteristically are businesses that are open and transparent in their actions and that often involve their different stakeholder groups in the ownership, governance and decision making structures.

Social enterprise combines the best of two different worlds: it is a mixture of the dynamism, nimbleness and self-sufficiency of the private sector, and of the public and social economy sectors that are more value-based. It is an individually, socially, societally and environmentally sustainable business model that “does good” in the society. To be able to do good in the society and in the world, social enterprise need to be viable business, but it does so with a conscience. It is still important what figure is on the ”bottom line” but it also thrives towards a double, even a triple bottom line approach. The social, and increasingly ecological, success of the business is measured, and hence, people, planet and profit are equally important.

Social business is a concept, not a legal form. Its legal forms are diverse in different countries (e.g. economic societies and foundations, mutuals and co-operatives, even company forms like Community Interest Company that was specifically created for social enterprise). The term social enterprise may be new but the idea itself is not. It goes back in history to mutual and self-help practises and draws many values from the old co-operative sector. There are different ways or routes of getting into social business:

Many people are familiar with Fair Trade and ethical micro-finance services of the Grameen Bank as great examples of social enterprise but there are many more in sectors as diverse as energy, clean technology and recycling; health and care; banking and finance; utility services; and work integration social enterprises (i.e. social firms). Here are some European examples.

If Europe is adamant that capitalism is still the way forward capitalism needs to change fundamentally.

Turning Point, the UK’s biggest public social care and service provider, is an inspiring story of a small, local alcoholism project growing into a big, ethical business by being innovative and flexible and by putting its customers and staff always first. To compete with the big multi-nationals it is using new outcomes-based commissioning methods, co-operation structures like consortium and outside-market activities (e.g. timebank) to co-produce public services.

Mondragon Corporation was established in the 1950’s with the express purpose of creating employment for young men in the Basque region of Spain and has evolved into an integrated system encompassing several manufacturing and service businesses, a bank and a university. Over the years it has thrived and has demonstrated a sustainable form of economic development. As a people-centred business (structured as an employee-owned co-operative) it has been resilient in recession and provides employment for over 80,000 people.

Specialisterne is a Danish social enterprise that uses the characteristics of people with autism spectrum disorder as a competitive advantage in the business market providing software testing, quality control and data conversion services. They create meaningful and well-paid employment for a group normally excluded from society. It has successfully expanded outside Denmark to Scotland, Iceland, Austria, Switzerland and the USA and has a vision of taking the model to India too.

Baywind Energy Co-operative is a community-owned windfarm in England that has 1,300 members. It has replicated its model by investing its profits in its Energy4All Ltd company that works with community groups and landowners to develop more renewable energy projects all around the country.

Putting it simply, capitalism is based on accumulation of capital. There are two questions we should ask in this time and era. Firstly, what is done with that accumulated profit? Considering the huge impact of the current crisis, is it anymore justifiable to only increase shareholder value or should the profits be re-invested in creating other types of capital? Secondly, how were those profits accumulated in the first place. Were, for example, ILO agreements respected or did the company use child labour and sweat shops? Or were redundancies necessary for short-term financial gain?

If Europe is adamant that capitalism is still the way forward capitalism needs to change fundamentally. Future, more responsible capitalism – or indeed, capitalism with conscience – that would pull Europe out if its economic, financial and climate crises must include creation of human, social and ecological accumulation of capital. To stimulate social and environmental progress we must go beyond GDP for new measurements. Instead of just plain economic growth, maximum wellbeing for minimal planetary input should be our aim. Values-led social enterprise could be a vehicle in achieving all this – making money and changing the world.

Whether social enterprise can become this transformational force in Europe will largely depend on what kind of enabling policies the EU and the Member States will create for it. It will need advocacy to make different social business models better known and it will require access to right-kind of finance (e.g. social investment and social impact bonds). To enable social enterprise to compete in public service markets it will need a level playing field. For instance, EU procurement rules don’t have a selection criteria specifically for social enterprise. If we don’t want to squander public money into tax havens anymore, this must be done.

To make this happen political leadership in both the EU and the Member States is required. The Green New Deal of the European Greens is all about changing current policies and practises to create social and environmental value. Will the Greens take the lead? 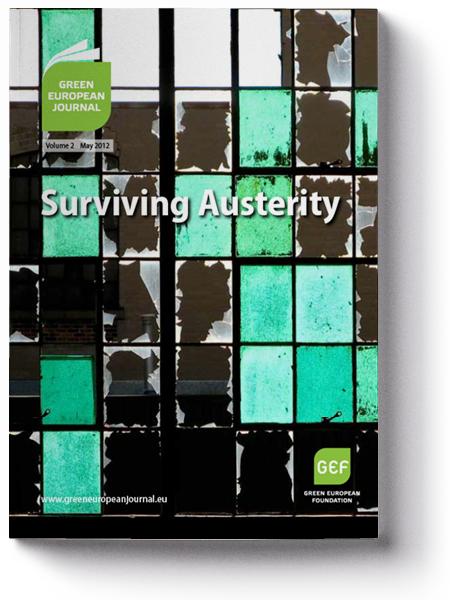 A new type of denialism is taking hold in the fossil fuel industry, a bid to ward off systemic change and protect their business model.

How can Europe introduce greater autonomy and wellbeing to its energy systems?

Why Is It So Difficult to Regulate Toxic Contamination?
Shachi Mokashi
Why We Need a Decolonial Ecology
Aurore Chaillou, Louise Roblin, Malcom Ferdinand
The Return of Industrial Policy in the European Union
Ferdi De Ville
Greek Watergate: Behind the Predator Spyware Scandal
Alessio Giussani