Green Transition
By Silvia Zamboni
All info
EN IT

On Sunday, June 16th, 2013, between the hours of 2:00 and 3:00 p.m., the price of electricity in Italy (the PUN or Single National Price) hit zero for the first time in history. In other words, electricity demand was fully covered by renewables. For the Italian energy sector and consumers this was an historic moment and an historic date. Until then, the PUN had dropped to zero in a few areas of the country but never before had it done so in the country as a whole.

Of course, it helped that it was a clear, sunny, windy day and that the catchment area of the hydro-installations was full. Two figures speak for themselves in terms of the extent and performance of renewables in Italy: in 2013, comprehensively, electricity generated from clean sources accounted for nearly a third of the total demand for electricity (32.9%) and approximately 15% of overall energy demand. Significantly, thanks to 7.5 % of the national yearly electricity production covered through PH solar energy, Italy is the world’s leading country in this energy sector today.

Moreover, in all 8054 of Italy’s municipalities there is at least one electric or thermal plant that runs on renewables, with a grand total of 700,000 plants. This is a solid indication of the advent of a new generation of Italian energy that diverges from the recent past of oligopolies and mega plants that run on fossil fuels. Over the last thirty years, a number of government-pricing incentive efforts have been implemented.  These have had a negative effect on foreign investment and on the Italian energy industry. Despite this fact, the transition to a low carbon energy market remains very respectable indeed. In 2013, Italy passed the 100 TWh “mark” in electricity from renewables, climbing to the top of the “Everest” of 104 TWh for the first time ever and this despite a drop in the roll out of new potential.

This increase is reflected in the energy facilities of Italian municipalities. As previously stated, 100% of Italy’s 8054 townships currently have at least one renewable-fueled plant, but that is not all. The number of municipalities that have already achieved 100% of their energy supply from renewables – currently 35 – is increasing too. All of these 35 municipalities are entirely self-sufficient in both electricity and heat supply through their use of renewables: a mix of photovoltaic solar, thermal solar, biomass (short circuit), geothermal (semi-thermal), micro-hydroelectric and wind power. Legambiente does not factor in townships that use high enthalpy geothermal plants and large hydroelectric catchment areas when establishing which communities are considered self-sufficient. That is an extremely strict interpretation, which effectively reduces the number of communities that qualify for the gold medal for 100% renewable towns.

Of the magnificent 35 (energy self-sufficient communities), the majority are located in the autonomous Province of Bolzano (22).  Second is the Province of Trento (5), Sondrio (2), Alessandria, Bergamo, Grosseto, Pisa, Siena, Udine (1 each). Some 2629 municipalities throughout Italy are self-sufficient in electricity alone, i.e. they produce more electricity than they consume. Some of the best examples include Cuneo which uses a mix of five renewable energy sources (photovoltaic, micro-hydraulic, geothermal, biogas and biomass) thereby covering 100% of its residents’ energy supply; Foggia, which meets household energy needs with 3 technologies (photovoltaic, wind power, and biogas); Terni with 5 technologies (photovoltaic, micro-hydraulic, biogas, biomass, bioliquids); and finally, in the south, Lecce, which is self-sufficient through its use of photovoltaic and wind power.

All of this is good news, especially since the transition to the post-fossil era has become unavoidable. There are several reasons for this. First, environmental factors exist; meaning there is a need for a reduction in greenhouse gas emissions. Additionally, there are economic reasons – peak-oil for example – and geopolitical reasons, which include the increased instability in the regions from which Italy imports methane gas and crude oil or through which gas products transit.  The latter have brought to the forefront – to the detriment of environmental concerns – the issue of “energy security” e.g. security of supply. Finally, for a country like Italy, which in 2012 spent a record 64 billion on its energy bill, shifting to a low carbon economy is something that is necessary from a strictly budgetary point of view.  A drop in consumption and in the price of crude oil brought the energy bill down to 56 and 51 billion in 2013 and 2014 respectively, but it’s still too much.

Europe needs to take the lead

Commitments made within the European Union, both old and new, have also boosted Italy’s energy transition. Italy aimed to meet CO2 emissions reductions by signing the Kyoto Protocol, but it also signed up to respect targets set by the E.U. 20-20-20 Climate Package established by the European Council on October 24th of last year. The commitment was to reduce CO2 emissions by 40%, increase by 27% final energy consumption, which is covered by renewables, and a non-binding commitment to a 27% increase in energy efficiency. Green Italia labeled these objectives a disappointment both in terms of fighting climate change and in terms of European leadership in reference industries, as well as by way of breathing fresh air into environmental and social sustainability of the economy and job creation, with the energy strategy encompassing the European Green New Deal as well.

Europe must not give up its position as a leader in the transition to the post-fossil era by signing the Kyoto Protocol and by passing the 20-20-20 Climate Energy Pack. Both were contributing factors in increasing the percentage of energy needs covered by renewables in Europe (increased from 8.5% in 2005 to 14.4% in 2012, with a view to easily surpassing 20% in 2020). Europe must not give up its role in spearheading the march towards the decarbonizing of the energy system.  Otherwise, the continent will run the risk of losing its competitive advantage – in terms of technological innovation – to China and the USA, as both countries are investing massively in these sectors.

Back to Italy, where the transition to the post-fossil era will not be without pain. That will be the case for the big players of the sector Eni and Enel both of whom have made major investments in big turbogas plants, in regasification, and in related infrastructure. Gianni Silvestrini, a longstanding expert in energy savings and renewables, as well as the author of a recently published work “2 gradi” – reckons that Italy will need to plan for a transition phase to reduce imports of natural gas. On the demand side, it will also need to provide for the use of highly efficient heat pumps, biomass and solar thermal headers. In doing so it would promote the spread of electrical renewables, specifically photovoltaic, which was launched at the affectionately named grid parity and must stand up without incentives. Finally bio-methane must be used (this is obtained using leftovers from the food and restaurant industry, farms and purifiers). In other countries in Europe this is already a reality. In Italy, for lack of appropriate standards, on the demand side, Silvestrini emphasises the important contribution the energy requalification of buildings can have: an annual cut in energy consumption of 1.5%, in ten years, would mean savings of one third (8 billion cubic meters) of methane imported from Russia (22 billion cubic meters).  This would give new life to the building industry, one that is particularly hard hit in the wake of the economic crisis. This would also be an opportunity to create jobs without gobbling up new pristine land. This is but further confirmation that the environment and the economy go hand in hand.

Italian municipalities have a role to play as driving forces in the green transition. Capitalising on local energy plans and well-timed policies in the area (public lighting, mobility, land use, reduce/reuse/recycle, waste management, energy requalification) will have a major impact throughout the country as a whole. This will also increase the amount earmarked by the government for appropriations that go to the green economy. It is also very good news that, with 3069 members, Italy is currently first in class in Europe in municipalities that have signed on to the Mayor’s pact, which requires them to reduce CO2 emissions by more than the 20% targeted at European level.

The editorial team brings you infographics on the potential of renewable energy in 2049, while Daniel Scholten explores the power struggles its rollout will bring.

EN
Read more
EN
Read more
First in the class, but not best in the Class – The EU’s Proposal for the 2015 Climate Conference in Paris Climate and Energy
By Silvia Brugger 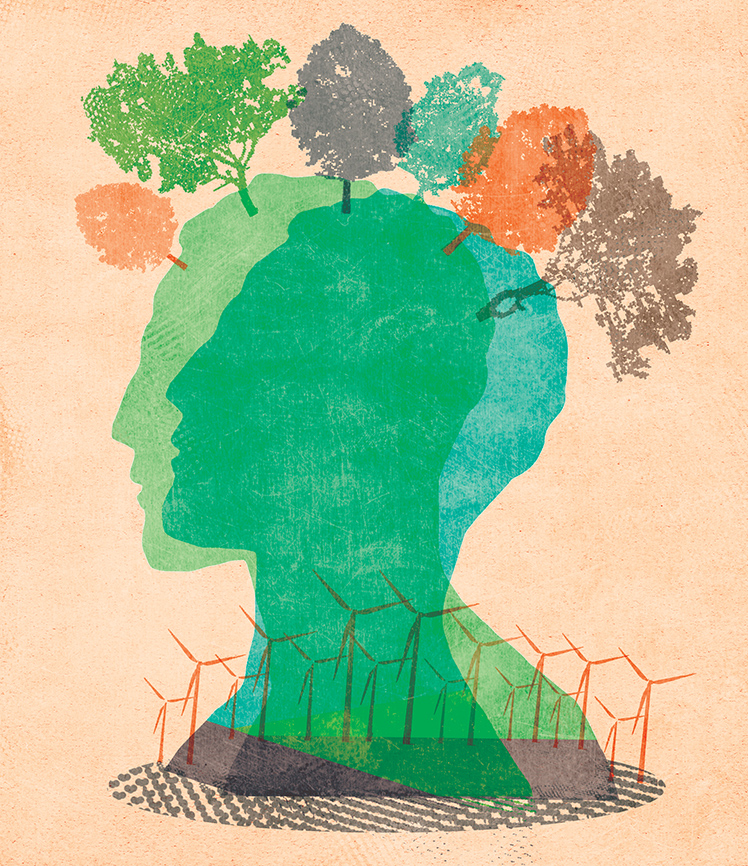