The idea that wage increases will push up prices is a common inflation fear. But rather than a “wage-price spiral”, it is Europe’s vulnerability to global shocks that is the key factor in inflation and its low wages that exacerbate the cost of living crisis.

This article is part of a series on the “Inflation Debate”, looking at different understandings about why prices are rising and approaches to what should be done about it. Richard Wouters and Danae Kyriakopoulou also contributed.

Inflation is high. The United States published an annual rate of 8 per cent in August 2022, while the Eurozone saw an average of 10 per cent in September. The European average masks significant differences between member states. France’s 6.2 per cent rate is the lowest in the Eurozone, while inflation in the Baltic countries topped 20 per cent. In response, the US Federal Reserve and the European Central Bank are raising interest rates, accepting a rise in unemployment as the cost of pushing inflation down.

High inflation reduces purchasing power when incomes do not rise in step with prices. Understanding the mechanisms at work is essential to calibrating the response; the return of inflation has not eliminated the need for a green transition, public services, and reduced inequalities.

The inflationary “threat” is a favourite bogeyman of conservative and neoliberal economists. Quick to be moved by inflation, for them it is above all a question of defending savers and wealth and preparing the ground for austerity policies. But this vision fails to identify the actual reasons behind price rises.

It was not wage growth that caused the current level of inflation but rather excessive dependence on globalisation. Pandemic-related disruptions to global supply chains, the energy crisis intensified by the Ukraine war, massive speculation, and rising shipping costs have produced drastic cost increases for many companies. Retail price rises show that these costs are being passed on to consumers, allowing companies to maintain or even increase their profit margins. When profit shares increase, the wage share falls automatically. For the Eurozone, Eurostat estimates that this will drop from 57.6 per cent of GDP in 2020 to 54.9 per cent in 2023, the lowest level since the launch of the euro. To prevent nominal wages from rising in the name of the fight against inflation is to accept and encourage this trend. Declining wage shares are underpinned by a series of factors: restrictive European economic policy, declining trade union coverage, the effects of international competition on labour markets (weaker labour law, higher unemployment, short-term contracts), and the dominance of large corporations in certain sectors.

The fight against inflation goes hand in hand with the green transition.

In such a context, raising interest rates to fight inflation risks inflicting economic damage, reducing economic activity, and increasing unemployment. A terrible recession would be needed to bring inflation down. Admittedly, governments are adopting emergency measures to cushion the rising cost of living. But this support is insufficient for the most vulnerable. Often it benefits everyone without reducing inequalities nor encouraging changes in behaviour (as seen with fuel subsidies). Furthermore, these subsidy policies will not last: calls for budgetary rigour will get the better of exceptional measures.

Alternatives are necessary. Rather than blindly attacking inflation with restrictive monetary policy, we must rethink the hierarchy of economic policy objectives. The current cost of living crisis, which follows on the heels of the health crisis that underlined the importance of frontline workers, points to the need to rebalance the wage structure. For inflation cannot be understood without analysing the balance of power between workers and employers. When the scales are tipped against workers, wages receive less of the valued added relative to the return on capital. This is precisely what has happened in Europe since the 1980s.

The harmful effects of inflation on real wages can thus be counteracted through indexation – a mechanism used by many European countries in the past. Indexation will be all the more essential if inflation persists, especially considering that the wage share has been shrinking for years. Large companies, especially in the transport and energy sectors, have been well-positioned to benefit from current inflation. As such, price controls should be considered where and for as long as necessary and excess profits such be heavily taxed. Going forward, European economies need to be made less vulnerable to global shocks, the real drivers of inflation. This goal calls for reduced dependence on imports – in particular energy – and greater investment in transport, renovation, and agriculture, as well as supportive trade policies. The fight against inflation goes hand in hand with the green transition. Squeezing wages is not the answer.

This article is part of a series on the “Inflation Debate”, looking at different understandings about why prices are rising and approaches to what should be done about it. Richard Wouters and Danae Kyriakopoulou also contributed. 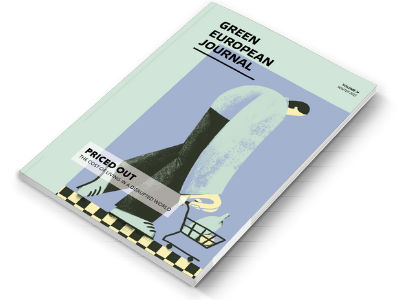 Order your copy
From Purchasing Power to the Power to Live with Dignity
Laurence Blesin
Will High Costs Stop Europeans’ Mobility in its Tracks?
Philipp Cerny
Price Increases: Who Is Picking Up the Tab?
Cristina Suárez Vega

Who has the Power? The ECB Role in the Euro-Crisis Finance and Economy
By Delfina Rossi

The 2007 financial crisis evidenced the weaknesses of the Eurozone. Since then, European policymakers have tried to save the euro and the European financial market. As consequence of the economic and political instability of the last years the European Central Bank has de facto gained more power vis-à-vis the other European Institutions and political actors. Today the ECB is fundamental for determining Member States’ economic policies in all areas, not only monetary policy.

The ongoing crisis, caused by excessive global debt, saw only financial institutions being protected. For life to come before debt we need to build an alternative to this out-of-control financial system.