EN SR
More by Luc Barbé
Belgium and its Green Parties at the Crossroads Greens in Government: A Headache for Internal Party Organisation Flanders: a Region in Search of Itself

The 2019 European elections saw Green parties achieve their best ever result. Their new weight in a fractured European Parliament is an opportunity for progress on climate, democracy and the rule of law, and social justice. Green parties often perform better at European elections but this time the success is sustained elsewhere. Local elections in the UK, national elections in Portugal, government coalitions in Finland, Sweden, and Luxembourg – the Greens are advancing at all levels. The major caveat is that the “green wave” is absent from much of southern and eastern Europe. Part of our latest edition looks at where political ecology made electoral gains, bringing together analyses of five Green parties to assess their prospects for the years to come. Here Luc Barbé explains where Belgium’s two Green parties, Groen and Ecolo, sit in a divided political landscape.

Belgium has two Green parties: the Dutch-speaking Groen in Flanders and Brussels and the French-speaking Ecolo in Wallonia and Brussels. Most observers saw the results of Ecolo as a handsome victory, although the party achieved a few per cent more in 1999 and 2009. The results of Groen were a major disappointment. Given the polls and the prominence of the climate crisis, it had hoped for much more.

Ecolo is a member of the Walloon and French Community governments. Ecolo and Groen are members of the Brussels government and may also participate in the federal government, depending on negotiations in early 2020.

There are two common challenges for both parties. European climate policy has changed significantly in recent months with the new lending policy of the European Investment Bank, new standards for sustainable investment and, especially, the EU Commission’s European Green Deal. Despite its questionable coherence – where is agricultural policy? – for many citizens, this appears to be a structural break. Making it clear that tackling the climate crisis requires more than just greening the current economic model here and there will be a major challenge. That climate change is becoming increasingly visible should help both Green parties. Expert report after expert report confirms that intervention is urgent. Young people are likely to take to the streets more often and voices from the world of business calling for a carbon-neutral society are growing louder.

This article is from the paper edition
A World Alive: Green Politics in Europe and Beyond
Order your copy

Possible federal government participation poses challenges for both Ecolo and Groen. The next government will be faced with a difficult budgetary situation with little room for manoeuvre. Will the new government be willing and able to pursue a radical climate policy? What about social justice and migration policy? How will these questions play out in a federal government run by an unwieldy coalition of seven or eight parties? Ecolo will be able to point to achievements in Wallonia, Brussels, and the French Community governments. Groen will not have that possibility. In order to convince voters in 2024, both parties will need to develop projects of their own that look to the future and that can counter-balance potential fallout from government participation. 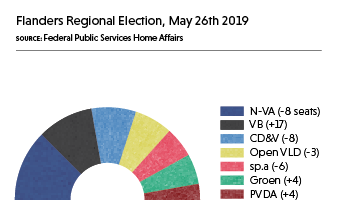 Groen faces three specific challenges. First, to part of the electorate, the party’s message comes across as urban, elitist, and moralising. Other parties do their best to reinforce this impression. The party has been trying to correct that for years, but so far with only modest results. Second, under pressure from extreme right-wing Vlaams Belang (Flemish Interest) and separatist New Flemish Alliance, diversity and migration have been the most important issues in Flanders for years. Groen positions itself as the radical opposite to these parties and its core voters appreciate that. But other potential voters are deterred by Groen’s radicalism. For too many voters, Groen has a disquieting, even threatening, position on both the open/closed society and the climate fault lines. How do you deal with that without giving up your values?

The third challenge for Groen is the tension between the Green programme and science. The trend of fact-checking in the press generally works well for Groen. But on GMOs and 5G, Groen has faced attacks from journalists because, according to them, the scientific foundations of the party’s positions are either weak or non-existent. The pressure may increase in the coming years and reduce the party’s credibility. Will Groen in 2024 finally become a medium-sized party with the support of 12 to 15 per cent of the electorate? That objective is not yet within reach, but it is a pre-condition for a real place in Flemish party politics. 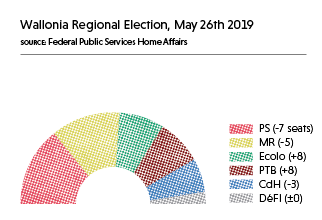 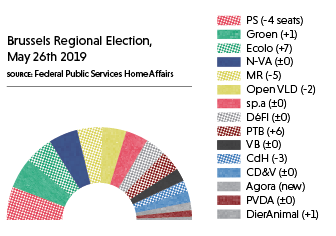 Ecolo has a specific challenge of its own. In the last year, new movements such as Extinction Rebellion have been organising civil disobedience campaigns in municipalities where Ecolo is in the majority and therefore jointly responsible for policing. Ecolo finds itself on two sides, creating tensions within Ecolo and between Ecolo and movements and citizens. In French-speaking Belgium, the demand for participation and co-management has grown in recent years. Many municipalities organise citizens’ committees and the Brussels Parliament has mixed committees of citizens and members of parliament, a radical and innovative initiative. In the coming years, Ecolo has the opportunity to strengthen these dynamics further.

The current context in Belgium offers Ecolo and Groen promising opportunities, as on climate, but also challenges, such as possible government participation. Belgian politics has been unstable for years and election results are volatile, particularly in Flanders. In the next elections in 2024, parties could rise or fall by 5 or 10 per cent. This naturally causes great nervousness in party headquarters. The winners of the next elections will be those parties with a novel and compelling story. Participation in government will improve the image of some parties and seriously damage that of others. Finally, one question is crucial. How can Green parties encourage people who, rightly or wrongly, resent politics because they feel that they are living in a time of social decline to believe in a better future of socially just and inclusive green change?

This article is part of our latest edition, “A World Alive: Green Politics in Europe and Beyond”.

A World Alive: Green Politics in Europe and Beyond

A World Alive: Green Politics in Europe and Beyond

This edition explores the different worlds of green politics today. From concepts such as ecofeminism and the Green New Deal to questions of narrative and institutional change, it maps the forces, strategies, and ideas that will power political ecology, across Europe as around the world.

Belgium and its Green Parties at the Crossroads Greens in Government: A Headache for Internal Party Organisation Flanders: a Region in Search of Itself

Where do the Finnish Greens stand after entering a progressive coalition government in 2019? Part of our four-part "Green Wave" series.

With government negotiations still up in the air, we hear how the Irish Greens bounced back in 2019 and 2020. Part of our four-part "Green Wave" series.

In political systems based on cooperation, determining who to ally with and when always raises critical questions of identity, tactics, and strategy.