Roderick Kefferpütz works for Germany’s only Green-led regional government as Deputy Head of Unit for Policy and Strategy in the State Ministry of Baden-Württemberg. He was previously head of office for MEP Reinhard Bütikofer, Co-Chair of the European Green Party (EGP). He holds an MPhil from the University of Oxford.

Europe and India in the Asian Century
By Jagannath Panda, Roderick Kefferpütz

From their democratic traditions to shared interests in technological development, Europe and India have much in common and to gain from cooperation.

With three candidates in the running for the chancellery, the electoral race is still open and polls could begin to shift as lockdowns are lifted.

As China uses the crisis to extend its influence, Europe needs ambitious policies for economic recovery if it wants to be a relevant global player.

The European Green Deal is being pursued as an economic matter. In a geopolitical world, it needs to be geopoliticised.

ENFR
Read more
Who Is the World’s Moral Superpower? A Book Review
By Roderick Kefferpütz

UCL assistant professor Brian Klaas discusses the West's role in global democratic decline and what should be done to reverse this trend.

EN
Read more
Enter the Dragon: the New Global Economic Order and What It Means for Europe
By Roderick Kefferpütz

With authoritarian populism on the rise, liberal democracy in Europe is facing an existential crisis. In this interview, Yascha Mounk, author of The People vs. Democracy, hashes out the conundrum facing democracies old and new.

An interview with co-leader and climate minister from the New Zealand Greens on their successes in government so far and the challenges that lie ahead.

As digitalisation turns the world of work upside down, Reiner Hoffmann discusses the situation of employees in the future labour market, and the role of the EU and trade unions.

A shared republican understanding of democracy could offer a way out from the dead ends of ethnic nationalism and identity politics.

The automotive industry is in store for drastic change in the next ten years as the car is practically being reinvented and Germany and China compete to develop electric car technology.

DEEN
Read more
“Social justice for all? That’s like Harry Potter on TV on a saturday night”
By Robert Habeck, Roderick Kefferpütz

We talked strategy & political reality with Robert Habeck, leader of the German Greens in their strongest state result this year.

Foreign investment into the EU often have political, as well as economic, motivations. Should the EU act on this? 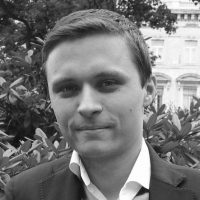