Danijela Dolenec researches democratisation and the political economy of Europe. Her book Democratic Institutions and Authoritarian Rule in Southeast Europe won the 2013 National Science Award in Croatia. Her recent work includes ‘Exploring Commons Theory for Principles of a Socialist Governmentality’ (Review of Radical Political Economics 2016, with Žitko) and ‘Democratization in the Balkans: The Limits of Elite Driven Reform’ (Taiwan Journal of Democracy, forthcoming).

The Green-Left Future of Europe: A View from the Periphery
By Danijela Dolenec

ENESFRPLRU
Read more
The Unhappy Marriage of Capitalism and Democracy at the Root of Europe’s Crisis
By Danijela Dolenec, Mislav Žitko

Looking beyond (de)growth, what sort of economic and political changes are required in Croatia to bring about both an equitable and sustainable economy? 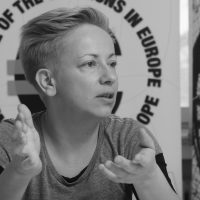