Back in January 2013, David Cameron promised the British people a referendum on the European Union on the condition that the Conservatives would win the next election. What was once a fleeting promise has now become a reality and British voters have a choice to make – Brexit or Bremain?

When Cameron first promised a referendum, Labour were 5 points ahead of the Tories (Conservative Party) in the polls, and it seemed highly unlikely. By early 2015, many were touting a Labour-Scottish National Party (SNP) coalition, and right up until May 7th, with his concession speech written out, it didn’t ever look that likely that Cameron would have to follow through on his promise. But then the Conservatives won an outright majority and focus soon turned towards this promised in/out referendum.

Fast-forward through the great political charade of Cameron’s renegotiation deal, through every Tory MP and his dog’s opinion on whether or not this deal was ‘enough’, and we find ourselves just a couple of months ahead of this crucial decision. Most of the coverage has focused on the inner squabbles of the Tory front bench, and little has been done to encourage any real debate. Equally little has been done to understand, analyse or evaluate the European Union and yet people are thirsty for information and reasoned discussion.

But a lack of clarity has shrouded this referendum for months: lack of clarity on the date, and on the question, on who can vote and who cannot, and although these questions have now been answered we now have confusion over who can even comment on or discuss the topic. An actor being interviewed on BBC’s Today Programme about his latest play will have a question tacked on to the end about whether or not he supports a Brexit (it was Jeremy Irons, he is undecided), but business leaders are forced to resign for expressing their personal views (pro-leave John Longworth of the British Chamber of Commerce).

In early March, NGOs received a ruling from the Charity Commission that they must remain neutral in the referendum debate. They can only enter discussions ‘in exceptional circumstances’ and will be closely scrutinised. This is devastating for the pro-EU campaign, as social and environmental charities and organisations are some of the best advocates of EU policy that exist in Britain. However, this ruling has been questioned as being politically motivated in itself, as members of the Charity Commission are themselves staunch Eurosceptics, and whether it is adhered to remains to be seen.

Confusion has reigned as to who are the main campaigning organisations. The Leave side falls in to two main camps: Grassroots Out (Leave.EU) and VoteLeave, and yet 28% of anti-EU party UKIP  apparently want to ‘stay in’, if @StayUKIP are to be believed (although this is strongly contradicted by recent YouGov polling). On the Remain side we have Britain Stronger In Europe, which consists of a large number of CEOs, none of whom flagged the fact that their acronym ‘BSE’ is more widely associated with mad cow disease. There is the youthful and optimistic Another Europe is Possible, but they stand little chance of securing being named the ‘official’ campaign by the Electoral Commission (and with this up to £600,000 of public grants).

Within the Greens however there is little confusion, and 95% of conference members of the Green Party of England and Wales voted in September 2015 to campaign for a Yes vote. Greens are working to shift the debate away from the inner politics of the Tory party, or sound bites from big business, and are concentrating on highlighting the benefits of the European Union for workers’ rights, environmental protection, and financial regulation. Recent polling data from YouGov revealed that 80% of Green Party supporters are in favour of remaining in the EU, the highest percentage of all political parties, although we are closely followed by the Liberal Democrats and the SNP.

Although leaflets are starting to arrive in letterboxes from Stronger In, local pro-EU campaigns on the ground are rather few and far between. Despite Labour MEP Richard Corbett launching the terrific EU myth-busting app Doorstep.EU, the Labour party in general has been too caught up in their own internal politics to get stuck in to campaigning. Meanwhile, the Lib Dems are using the referendum as a chance to raise their profile again, which could potentially be detrimental to the Remain side’s efforts.

New pro-EU campaigning groups are starting to spring up though as the potential reality of a leave vote motivates people to act and frustrations are aired about the narrow-mindedness of the current debate. Unlike the UK’s First Past the Post system, each individual vote counts the same as the next, and so the democratic potential of this referendum is starting to be realised. This has inspired creativity across social media and on the ground. Although none of the following have the resources of Stronger In, the likes of We Are Europe, In For The Win, Good Europe, Europe for Peace, and Environmentalists for Europe are all enriching and diversifying the current rhetoric.

Penetrating the narrow debate with positivity about Europe is, however, difficult. The media is one of the greatest weapons in the Leave camp’s arsenal. Playing the role of the Holy Ghost in the unholy trinity made up of Nigel Farage, the Father, and Boris Johnson, the Son, it has been guiding public opinion against the EU long before Cameron announced the promise of a referendum. The EU has always been the perfect scapegoat: for decisions that politicians don’t want to take responsibility for; for domestic policies gone wrong; for lazy journalism; for poverty; inequality; health and safety; political correctness; red tape; not enough freedom; too much freedom; and so on.

Of course there are balanced arguments from the Guardian, 91% of whose readers want to remain, but the Guardian has a 17% share of the quality press. At the other end of the spectrum we have the Express and the Daily Mail, the latter of whom recently fabricated a story that the EU wants to tax recycling. This story was based on a list of recommendations from a Committee of the Regions report which had been released two years earlier, and referred to ‘Brussels bureaucrats’, despite the fact that the Committee of the Regions is made up of elected mayors from across the continent.

This huge chasm between the Guardian and the Mail is not nice and evenly spaced out to service every opinion in between; the majority of this media spectrum is a Eurosceptic wasteland. Not necessarily Eurosceptic in an active way, generating and disseminating myths and criticisms, but a more low-level and pervasive mistrust and lack of respect.  It could be a sneering tone or the perpetuating of misinformation, not necessarily an active attack, but passive negativity and mistrust.

What of the BBC? Our great national institution which lauds itself on its impartiality? They are guilty of repeating misinformation, using lazy language, of devoting time to the soap opera side of the referendum debate, rather than real issues, and of ignoring diverse voices in the European discussion. Over ten years ago a report found that the BBC was ‘not succeeding in providing basic accessible information on the topic of Europe’, and for suffering from ‘certain forms of cultural and unintentional bias’. The report pointed out the ‘ignorance’ among BBC journalists, and this ignorance is rife amongst the British media. Too little is known about the European Union, the decision making processes, EU law, let alone the benefits or negatives of such a Union. Learning about it is simply not valued, respected or encouraged, and outrageous myths act as click-bait and sell papers far more than informed and informative pieces would do.

One of the biggest accusations against the Remain side, used by the Leave camp and their tabloid allies, is of ‘scaremongering’ and the peddling of Project Fear; a doom and gloom narrative is being pushed on us to scare us all into staying in the EU. This is quite an impressive accusation when the Leave side itself thrives on fear. This is the side that has carefully crafted the image of the EU as a single entity scary bogeyman; an all-seeing, all-controlling monster in a polyester suit who will take away our vacuum cleaners and stop us speaking English on trains. And at the heart of the Leave campaign, UKIP and their supporters have been drumming up various fears for years; fears about immigration, homosexuality, feminism, and equal treatment. They have capitalised on the disenfranchisement of certain parts of society to push their agenda.

Fear and a lack of knowledge often go hand in hand. Ignorance leads to confusion, which in turn leads to fear. It is true that the pro-EU side has employed some rather alarming arguments in order to justify staying in the EU. This could have been done to employ the same tactics as the Brexiters; if their fear-mongering has brought them a huge following, why not adopt the same tactics? Or it could be because many in the Stronger In camp are genuinely scared by the many unknowns thrown up by a possible exit?

In order for the Remain side to win they must move beyond scare tactics and confusion and give clear information and facts about how the European Union works and what it has done for peace, human rights, the environment and equality. If they are to be truly successful, though, they must go beyond a defensive position and elevate the media rhetoric. They must inspire, as well as convince, embrace and nourish diverse and original voices, and break free of the narrow debate that our Eurosceptic media insists on perpetuating.

Cameron’s proposal for an in/out referendum on EU membership is likely to cause uncertainty and confusion for years to come, but what impact will it have on Scotland’s independence referendum? Scottish Greens co-convenor Patrick Harvie discusses the consequences.

In a context of an economic crisis and with public finances under stress, the on-going round of negotiations over the next EU Budget and the European legislation for the regulation of the financial industry have taken the British debate on Europe to a new level. 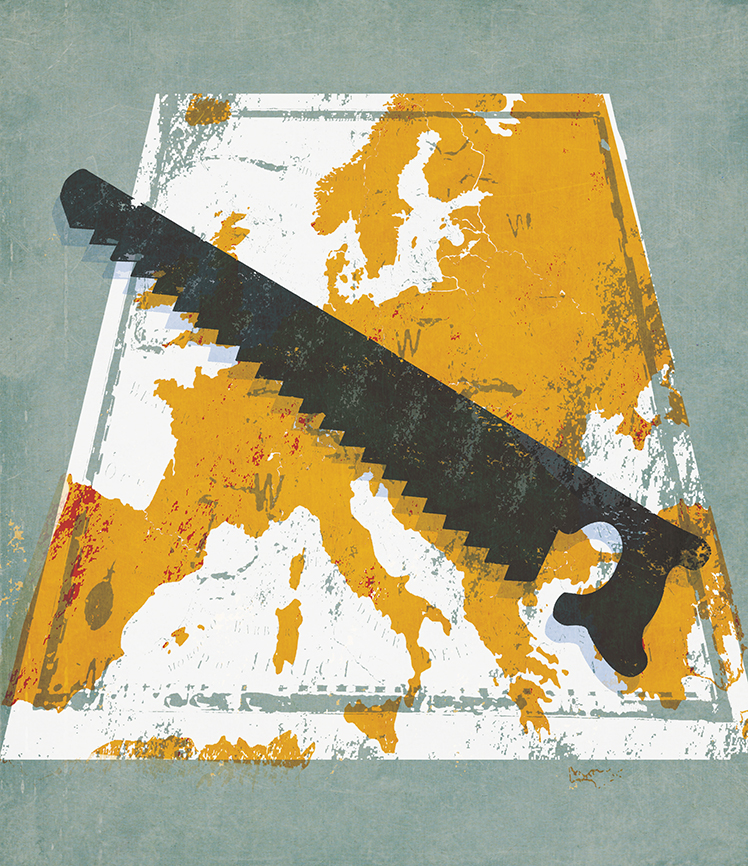