Florent Marcellesi is co-spokesperson and a former MEP for the Spanish Green party EQUO. He is a political ecology researcher and activist, a member of the editorial council of the magazine Ecología política, and a member of the think thank Ecopolítica.

ENES
Read more
From the Street Up: Founding a New Politics in Spain
By Cristina Monge, Esteban Hernández, Florent Marcellesi

Is political ecology able to push for real transformation and to offer a convincing narrative that transcends class lines?

An interview on struggling for a coal phase-out by 2030, a just transition for workers, and on why gender is relevant to the COP climate talks.

With animal rights awareness and activism on the rise, how can we turn animal exploitation into a thing of the past?

An interview with sociologist and freelance political writer Dick Pels and future Member of European Parliament Florent Marcellesi from the Spanish Green party Equo, in which they examine the issues at stake when trying to rethink the emotional case for Europe.

Greens have always defended that Europe is the right political space to provide answers for the many challenges we face and that it needs a democratic renewal. DiEM25 takes a step, albeit timidly, towards a green Europe and a green and shared prosperity that respects the planet.

Thirty years on from its transition to democracy after Franco, Spain faces a new transition to another system of government, which has yet to be defined.

The idea that the war in Syria can be partially explained by climate change is one that is often overlooked. The connection between conflict and climate change – whether it’s down to drought, food scarcity, or environmental degradation to homes – is stronger than it appears, and is one that needs to be urgently addressed before it is too late.

The Spanish citizenry has organised the so-called “convergence list of candidates” for the local elections in May 2015. These lists have integrated political parties, civil society and independent citizens aiming to regenerate the local policy from a political, social, economic and ecological point of view. What are the common points of such lists?

Halfway between a structured party and an explosive grassroots movement, Podemos remains a difficult-to-describe political UFO.

The 21st century presents a fascinating paradox: never before in its history has humanity reached such an advanced and refined level of technological development, but never has it come so close to the ecological precipice and global collapse. If this contradiction is to be overcome, political ecology must focus on two priorities: the relocalisation of the economy and the democracy of self-limitation. 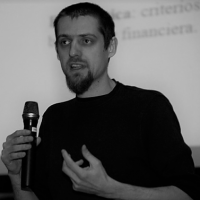