A striking brand of political momentum is building, driven by the resurgence of citizen-led initiatives around the commons – movements which amount to a contestation of existing regimes and models. Taking place at a certain turning point of European history, these phenomena refute the “end of history” hypothesis of 1989, with the disarming of the sharp polarisation between the ideologies of capitalism and communism, and point to alternatives to an exhausted narrative. Free individuals are reinventing together a form of political mobilisation and innovative organisation.

In the contemporary political landscape, the commons blur the lines of the ‘private’ and ‘public’ sectors as we have known them in the last century. Today’s approach to commonality is: “mine as much as yours”. The commons reintroduce in the political landscape an old archetype of political ecology: the steward, the warden, the custodian – of nature, resources, land, or neighbourhood.

The commons reject and provide alternatives to the deeply ingrained ideologies associated with the market and the state: the former’s refrain of growth, extreme individualism, and hyper-competitiveness; and the latter’s coercive standardising model. The movement of the commons and its importance on the ground, as well as the accompanying language of common goods increasingly taking root, constitutes a fundamental challenge to corporate privatisation, commodification and the grabbing of land, culture, and social ‘acquis’ following a neoliberal logic of extraction.

The immense diversity of meanings ascribed to the commons testifies to the rich and multifaceted significance this concept has acquired. But the differing ways in which this term has been deployed in varying contexts and moments in time also pose a dilemma for imposing a definition or framework. Applied in contexts ranging from urban public spaces to agriculture, from natural ecosystems to the virtual world, the contents of this edition alone demonstrate this diversity.

Some of these cases pertain to earthly, material resources, such as Vandana Shiva’s vivid account of the David vs. Goliath battle of subsistence farmers’ resistance to the attempted monopolistic capture of all seeds by an ever dwindling number of multinational corporations. Jonathan Piron’s case study in forest conservation shows that the commons can be a space for innovation and experimentation, while Ewa Sufin-Jacquemart and Radoslaw Gawlik’s examination of water management stresses the crucial need for communities to take ownership, in the broad sense, of the common goods they rely on. Richard Wouters and Liesbeth Beneder take a look at the potential for harvesting resources from outer space – a fascinating prospect though one which threatens to delay the much needed acknowledgement that even non-finite resources must be managed in a way that is equitable, just, and does not cause harm.

Data and information constitute less tangible forms of the commons, and Julia Reda discusses the digital commons and pioneering platforms for managing knowledge online. Cities have also become the scene of struggles against the private appropriation of space. Eric Piolle’s experiences in Grenoble illustrate the challenges to the management of public spaces for the common good, while Daniela Festa’s descriptions of original initiatives by ‘urban stakeholders’ in Italy teach us that the urban commons are about far more than simply passive stewardship.

Today’s approach to commonality is: “mine as much as yours”.

To these we can add the governance regimes and decision-making models, establishing novel hybrid structures and procedures. Tomislav Tomašević contends that the strict dichotomy between state and market as regulators of resources and public life is outdated, with both experiencing a certain crisis of legitimacy. Dirk Holemans explores a third option described as ‘autonomy’, rooted in a different economic approach to creating and measuring value through alternative means than the market and the state, bearing an implicit critique of the inadequacies of both these mechanisms.

From a European perspective, Sophie Bloemen and David Hammerstein criticise the EU for a lack of leadership in this area, while on the other side of the coin, Vedran Horvat shows the disruptive potential of social movements and transnational struggles – illustrating the potential of the commons to stimulate solidarity across borders. Underlying all this, Tine de Moor charts a historical trajectory that situates today’s initiatives within a long and rich history of collective resource management and collaboration.

Harnessing the Untapped Potential of the Commons

The proliferation of citizen-led initiatives for the management of resources is a development that Greens in Europe must pay close attention to. The commons help highlight the weak links and fault lines in current policies that need to be addressed. In the face of a challenged institutional realm and the increasingly emboldened grassroots mobilisation, the Greens must grasp the underlying political lessons for 21st century politics that the commons can teach.

One fundamental issue the commons raise is that of power, of which the concentration has had and has far-reaching implications. In the panel interview, Hilary Wainwright describes the commons as containing a new kind of power, in contrast to the traditional dominant power of the state, a power whose transformative capacity stems from its autonomous and creative nature. Equally, the transformative potential of the commons becomes clear when we grasp the idea that anything which can be privatised and used for profit can also be thought of within a commons perspective, as the discussion between Ugo Mattei and Molly Scott Cato demonstrates.

Michel Bauwens, however questions whether the commons, as a new narrative or new ‘value regime’, can or should truly emancipate itself from the state or if it is rather to be seen as a struggle for a certain vision of the state. Danijela Donelec underlines this perspective when she asserts her vision of the commons as politically useful when confronting the state and presenting potential models for reform, rather than as distinct autonomous zones that could potentially rival or even surpass the power of the state.

An exploration of the commons risks leading us into the trap of believing that power seized will automatically lead to fair organisation and inclusive decision-making, as John Clarke warns. Instead, it can provide a language for alternatives and making these a reality on the ground through a process of trial and error which, as with all genuinely inclusive democratic practices, is a laborious and painstaking process which necessitates a constant re-examination to ensure that we are moving in the right direction.

We should be heartened, however, that this journey has already begun. 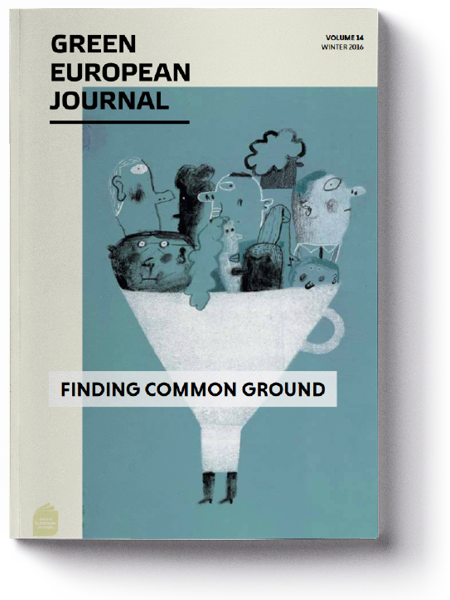 An investigation into the commons reveals the wide-ranging spectrum of definitions and applications of this concept that exist across Europe. Yet from the numerous local initiatives, social movements and governance models associated with this term – is it possible to identify the outline of a commons-based approach that could form the basis of a broad cross-societal response to the failures of the current system?

“We Cannot Delete Our Way Out Of This”: Learning In The Maze Lessons Unlearned Climate Leadership Means Building Bridges

What are the different ways resources can be managed and what different outcomes does it lead to?

ENESFRPLRU
ENESFRPLRU
How the Commons can Revitalise Europe Future of EU
By David Hammerstein, Sophie Bloemen

How can the EU support the establishment of commons, which could in turn sustain the European project?