This week’s publication of the European Union’s latest 2049 wellbeing reports was met with the usual grumbling from government ministers and conservative commentators. Naysayers, however, ignore the prosperity that the 15-year-old system has brought and the wider changes this technocratic turnaround represents.

As every year, the 2049 wellbeing reports rate EU countries from red to yellow to green on a total of 25 indicators covering material conditions and quality of life. As in 2047 and 2048, the Romanian government was picked up for high levels of household debt, a long-term worry linked to automation and layoffs in the 2030s. Luxembourg was red-flagged on housing conditions, its ongoing population boom forcing more people into cramped accommodation and rent now costing 60 per cent of the average salary. Surprisingly, Scotland received a red flag for a decline in perceived health – the first in 25 years of independence throughout which the green windfall has been reinvested in social spending.

Incumbent governments do not always appreciate being reminded of what is going wrong. Some national representatives have again criticised the reports, leaning on the increasingly dated image of interfering bureaucrats, despite the dismantling of the EU’s more disciplinary forms of governance. In the streets, polls continue to demonstrate that people overwhelmingly support the European Wellbeing Pact, which was introduced in 2034, appreciating how it highlights social issues overlooked in everyday debate. What is more, opponents forget that the pact is not punitive or even really finger pointing. In fact, it is enabling.

Countries that receive a red flag can anticipate low-interest loans from the European Investment Bank, on top of the standard wellbeing grants that the EU has dispensed in recent years. The EU now manages an on-average 130 billion euro wellbeing pot, raised through the International Fiscal Justice Initiative introduced by 145 countries in 2029.

Spending this money on wellbeing is the real source of ire for the Pact’s opponents. Some critics argue that its 0.1 per cent financial transaction tax should go on defence, others that revenues should be passed on to individuals through tax cuts. A further camp resents that a tax on trading exists altogether.

But the fact is that the EU countries chose to pool their portion of the global tax initiative, which has significantly stabilised the global economy, and to channel it into wellbeing. Despite its fuzzy complexity, the concept of wellbeing was picked up on precisely because of the common feeling in the 2010s and 2020s that the way in which politicians talked about the economy bore little relation to reality.

It is funny to remember the weight that certain economic statistics held. In Europe, governance by abstract value was enforced through tools such as the now-defunct Stability and Growth Pact. Overseen by EU institutions, this treaty compelled struggling regions of Europe to cut spending to meet deficit targets on the logic that public cuts today would encourage private investment tomorrow.

The 2029 global clampdown on tax avoidance was a necessary condition to displace the EU’s emphasis on growth, debt, and competitiveness.

Two numbers in particular were considered the keys to economic success: gross domestic product (GDP) and unemployment. But by 2019, GDP was no longer equated with social progress, as it had been for a long time. GDP was well suited to counting output in an earlier industrial era, but it failed on other accounts, excluding as it did environmental costs and unmonetised exchange and interaction. But as the technology and data-driven expansion of the late 2010s and 2020s failed to materialise and productivity continued to plateau, the relevance of growth as a catch-all figure was lost.

Unemployment too came to lack credibility as a measure of prosperity. From the 1970s, governments gave up on the 20th-century post-war goal of full employment and relied on the self-correcting market to create jobs, with insecure work increasingly permitted. Within employment figures, people involuntarily underemployed or juggling multiple jobs were included alongside those fortunate enough to retain stable employment. The tendency of statisticians to massage the numbers further damaged faith in their significance.

Some were ahead of the curve when it came to realising the flaws in reliance on a handful of statistics. In the 1980s, academics began to devise new measures of development. But while international organisations such as the United Nations introduced more comprehensive indices, their influence took decades to permeate the political sphere. In 2009, the EU institutions moved to engage with ‘beyond GDP’ but dropped the idea during the First Eurozone Crisis. By 2016, even International Monetary Fund researchers were pointing out that neoliberal policies designed to boost growth were driving inequality within and between countries, undermining future prosperity all round. Throughout this period, scholars and activists pushed the debate forward, but only the democratic turn against managerial policymaking in the mid to late 2020s, foreshadowed by the right-wing populism of the 2010s, sparked a real shift. 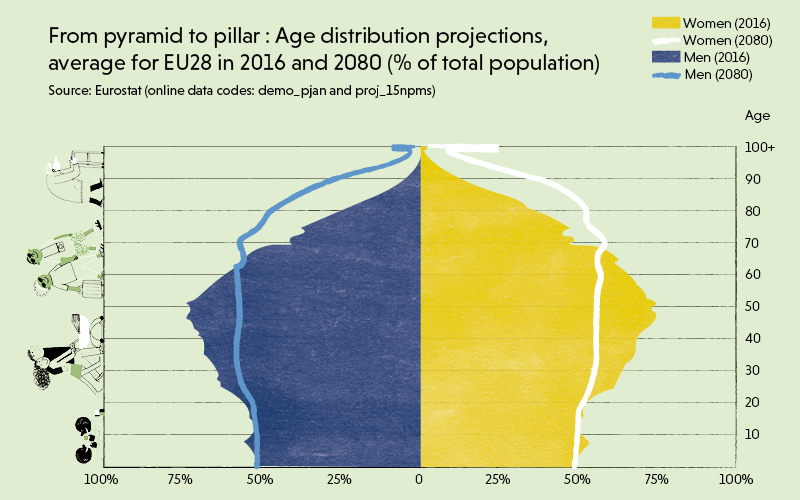 This decline in the relevance of stand-alone statistics is only the backdrop to today’s embrace of wellbeing; rupture was needed, too. In the years after the Second Eurozone Crisis of the early 2020s, two governments that were prepared to break with the status quo entered national office. First, a progressive, liberal coalition in Germany took power and announced wellbeing and carbon neutrality as its twin objectives. Reversing rising precariousness and taking climate action had been at the centre of the campaign. At almost the same time, in Italy newly elected left-green forces announced heavy investment in urban infrastructure and renewable energy and excluded this spending from debt-to-GDP calculations. Markets at first reacted with panic. Public debt levels had been battered from 2022 to 2025, but the open backing of the German chancellor, impressed by the detailed proposals, and widespread support from economists calmed market fears.

This unlikely alliance soon embarked upon treaty renegotiations from which the European Wellbeing Pact eventually emerged. The 2029 global clampdown on tax avoidance that accompanied the International Fiscal Justice Initiative was a necessary condition to displace the EU’s emphasis on growth, debt, and competitiveness. While the Global South was a big winner, and began to reclaim missing trillions, and Caribbean tax havens were amply compensated too, the restored revenues also gave Europe room to reform its troubled Eurozone. As for the new global tax, a substantial wellbeing fund proved to be the most consensual way to share it out.

Wellbeing’s critics are right to say that the Pact’s indicators are more complex than measures used in the past. But not only are they more meaningful, they reflect the wider democratisation of the economy throughout the 2030s. Today in 2049, GDP and debt levels continue to be measured, unemployment still matters, but they are no longer total proxies for the quality of everyday lives. Now the numbers put people first.

Order your copy
To 2049 and Beyond: A Future History of the Internet
Jennifer Baker
Futures Foretold: Climate Fiction
Aude Massiot
Planting the Seeds of Tomorrow’s Agriculture
Frédérique Hupin

Lessons Unlearned Editorial: The Invasion of Ukraine is a Wake-up Call Powers at Play

A new policy paradigm needs to emerge that is capable of thinking broadly and ecologically about wellbeing, sustainability, and justice.

Under the leadership of foreign policy chief Sofia Belver-Tamarashvili, the European Republic becomes a global force for social and environmental justice.

The story of how people won back individual democratic rights from illiberal governments and designed institutions that would protect them for good.