Any political theory which has nothing to say about borders is seriously flawed. Moreover, the result, intentional or unintentional, is to tacitly support the conservative view that existing boundaries and restrictive membership are sacrosanct.’ – Will Kymlicka

While Hungary’s barbed wire and Calais’s makeshift tents symbolise the tangible return of borders on the ground, the proliferation of cognitive barriers and ethnic categories mark the invisible yet heavy presence of borders in the mind. Both threaten the European project.

These ‘border games’ are entirely at odds with the theoretical consensus of an inevitable unfolding of history towards a globalised and deterritorialised international order. While sometimes instrumentalised as a refuge of an illusory unified and homogenous self, borders remain fluid, constantly shifting lines.

Our globalised world, where each is pitted against the other in a neoliberalism “without borders”, has resulted in the emergence of second class citizens, second class migrants and “non-class” refugees. The return of borders to delineate a national “imagined community” testifies to the anxieties of nation-states in the face of their waning sovereignty. In many respects, it is the Europe of nations struggling with the loss of its bearings which is clinging to the fantasy of assimilationist integration and wrestling with a phantom Other. Thus, the right-left cleavage is superseded by a new ideological confrontation between the nationalists/protectionists and the cosmopolitans/Europeanists.

As with new struggles around Europe, borders are a locus of observation on the ills of our society. This Volume 12 of the Green European Journal does not seek to unthinkingly denounce borders, but rather to transcend the time-worn dichotomies of us vs. them, mobility vs. security, restriction vs. freedom, and to confront populist proposals. It aims at stimulating Green reflections to transcend borders in a new European imaginary and to bring to life a European “home” beyond solely the nation-state.

The return of borders also illustrates the limits of European integration and solidarity, in particular through the false equation between the Dublin system, sending back asylum seekers to the countries in the periphery, and that of Schengen (Brantner). The refugee crisis and migration flows only serve to aggravate this Gramscian time of monsters, where the old beast of the nation-state is dying, without giving way to a new political Europe of citizens. (Cohn-Bendit).

Today, Greens are on the defensive. Green political movements were born within the EU era, one that had a borderless intra-Union and new accessions at its core. The Greens’ comfortable post-national and post-material certainties are somewhat challenged by contemporary developments. It has become necessary to construct new imaginaries through the subversion and transcendence of the current limits of our national political thinking, for example through a global nation for the oceans (Dubucquoy and Gaudot) or through new towns and cities (Guérot and Menasse).

While the illusion of national borders makes a powerful comeback, Greens are confronted with a political landscape in which the terms of the debate are defined primarily by conservatives and populists, while the Left has patently failed (Gemenne). The populist and nationalist visions offer false solutions which obscure the reality, and fail to confront it. In the face of this reality, Europe remains a relevant political solution (Triandafyllidou).

Varied and pervasive borders are today the manifestation of an arsenal of cognitive categorisation and a political architecture. They are de-territorialised, outsourced, incorporated and they erode the status of citizens and refugees (Yuval-Davis). In a ‘borderland’ Europe (Balibar), where political, economic, security, geographic and cultural borders are interwoven and superimposed, the ‘borderless’ mantra contradicts the identity and socio-economic protectionism of the nation-state. The European narrative remains in the grip of national frameworks subjugating their subjects to their territory and citizenship.

While Hungary’s barbed wire and Calais’s makeshift tents symbolise the tangible return of borders on the ground, the proliferation of cognitive barriers and ethnic categories mark the invisible yet heavy presence of borders in the mind.

The expansion of Schengen created a common house for all Europeans, particularly for those who, until then, had been living beyond its walls (Geremek). Borders are first and foremost a tale of women and men, an encounter between differences, the everyday reality of which can neither be prevented by, nor limited to, an administrative intervention of the state (Živković). Yet even within this common home without doors, the foundations of openness and freedom can obscure invisible, but for some keenly-felt, borders (White).

We pay tribute to a European ecologist – Roberto Albanese – who sadly passed away in January 2016, shortly after his article The Borderless Solidarity that Saved the Children of Vienna (1919 – 1920) was completed. It demonstrates that the idea of Europe becomes much more than simply an idea when people overcome national borders in practical and human ways.

Greens across Europe seem powerless to mount a response, undermined by their incomplete or idealistic vision of the political outlines of our societies. Borders must be rehabilitated within the Green political imaginary and its vision for society, in a nuanced and grounded fashion, since they are inescapable. Borders are the reflection of our societal progress and political struggles, horizons to progress towards. Our ideals of openness must not be confused with the naïve dream of a borderless Europe, nor with the illusory renationalisation of borders and its identity trappings.

The European Union as a project is the historical experiment towards another definition of the border: the alteration of the historical intangibility of borders and their ensuing political containment, and the advancement towards enhanced integration, sovereignty and subsidiarity. Crucial questions in this context are that of democracy and citizenship. In contemporary Europe, both are limited rather than empowered by the primacy of the nation-state space determining political life, participation and legitimacy. Borders will inevitably be part of any project to cast a new “imagined community” for Europe but they must be at the service of the common ideal of transnational democracy. 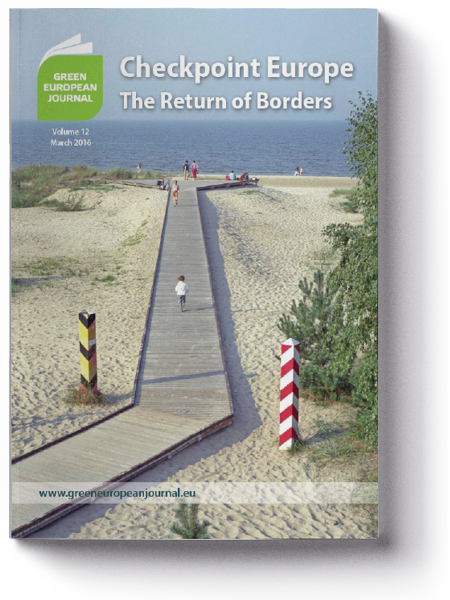 Beyond Borders: Lessons From the Western Balkans
Žaklina Živković
Europe: The Reconstruction of the Free World
Robert Menasse, Ulrike Guérot
A Balancing Act: How Europe’s Response on Refugees can be Strengthened
Didem Akbaş, Franziska Brantner

Since the outset, the ‘Franco-German engine’ has been the driving force in the European construction process.

ENFR
ENFR
The Unhappy Marriage of Capitalism and Democracy at the Root of Europe’s Crisis Democracy
By Danijela Dolenec, Mislav Žitko